Ten years into the game, Patrick Carney and Dan Auerbach add funk and soul to their potent blues-rock brew, with triumphant results...Of all El Camino’s many achievements, the most easily overlooked might be the fact that it exists at all. Ten years and seven albums is, after all, an impressive distance to travel on the back of The Black Keys’ consciously primitive manifesto. It’s partly a matter of providence. 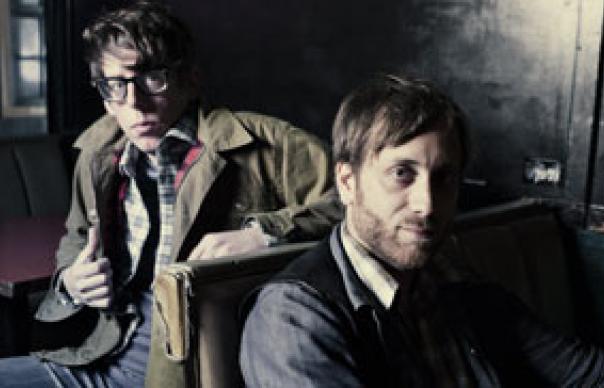 Ten years into the game, Patrick Carney and Dan Auerbach add funk and soul to their potent blues-rock brew, with triumphant results…Of all El Camino’s many achievements, the most easily overlooked might be the fact that it exists at all. Ten years and seven albums is, after all, an impressive distance to travel on the back of The Black Keys’ consciously primitive manifesto. It’s partly a matter of providence. By the time guitarist Dan Auerbach and drummer Patrick Carney rumbled out of Akron, Ohio in 2001, hell-bent on pursuing their particularly brutal brand of unadorned blues-rock thuggery, The White Stripes had already ensured we’d become acclimatised to primitive squalls of bad-weather blues.

Jack and Meg’s growing profile created a context for The Black Keys, yet they suffered somewhat by comparison. Where the Stripes were wont to add a pinch of Pop Art mischief, Auerbach and Carney’s approach was dourly puritan, and they initially seemed ill-equipped for the long haul. With the release of stodgy fourth album Magic Potion in 2006 their dedication to a single idea lost much of its lustre; the listener longed for some light relief and an awareness of other horizons. If that album now sounds like a salutary lesson in the perils of bowing to self-imposed rules rather than seeking to rewrite them, its follow up, 2008’s Attack & Release, moved The Black Keys into a whole new dimension. With flute, banjo and organ drifting into the picture, the results were subtle, spooky and expansive, less about the immediate interplay between rhythm and riff and more about creating a clinging, dream-like atmosphere that wove its way through an entire album.

The change had plenty to do with Danger Mouse, the genre-hopping Midas who produced Attack & Release and one song (the irrepressible “Tighten Up”) on follow-up Brothers (2010), and returns to the fold on El Camino. This time, however, everything has changed. The Black Keys smashed into mainstream consciousness with Brothers, a triple Grammy-winning, million-selling behemoth, making El Camino a record with much to live up to. Perhaps its most impressive achievement is that it never once sounds like it. Where Brothers was loose, spacey and more openly soulful, El Camino is, by comparison, a quick thrill: with 11 tracks in 38 minutes it is five songs and almost 20 minutes lighter than its predecessor. Returning to the bare-boned foundation of live electric guitar and drums, it goes directly for the jugular, the eclectic sprawl of Brothers giving way to a lean, hungry approximation of the best of the ’70s. The winking strut of glam merges with the strident urgency of The Clash, and the power of Zep and Sabbath bleeds into idiosyncratic stabs at urban funk, soul and early disco.

The album comes out of the traps snarling. “Lonely Boy” lets loose a great slavering wolfhound of a riff to torment the roller-rink keyboards, while Auerbach pities some poor disenfranchised soul (“Your Mama kept you but your Daddy left you”) who has, all the same, somehow snared him. The ascent into a genuinely anthemic chorus turns out to be a recurring theme. These are direct, accessible, ruthlessly hook-heavy songs. “Gold On the Ceiling”, with its wide-bottomed boogie, campy handclaps and high-pitched Flo & Eddie-style Halloween screams, is like The Sweet gone feral. “Run Right Back”, another stomping glam throwback, roughs up the “Spirit In The Sky” riff over deliciously distorted bass. Auerbach enhances the mood by mimicking Bolan, both vocally and lyrically: it requires no great leap to imagine lines like “Finest exterior/She’s so superior” gracing a vintage T.Rex song.

El Camino wears its influences firmly on its sleeve. “Dead And Gone” takes an upstanding Motown beat and slashes through it with a sharp, urgent guitar figure liberated from The Clash’s “London Calling”. “Hell Of A Season”, meanwhile, suggests someone has been copping an ear to “Police And Thieves” right down to the lurching reggae breakdown. Yet the payoff is immense. On these songs The Black Keys sound like a fully functioning, turbocharged rock’n’roll band. They also sound, for perhaps the first time, as though they’re having tremendous fun.

Naturally, there are times when the skies darken. “Little Black Submarines” is the album’s sole concession to the epic, and has clearly been given licence to let all hell break loose. It begins as a minor-key acoustic creep, Auerbach singing his sorrows down the line in his best wounded Robert Plant quaver. It taps along, picking up the merest hint of ghostly organ, before collapsing into a fearsomely overloaded landslide of drums and guitar. Towards the end, somewhere way off-mike, Carney emits a primal “Yay!” as the music sweeps over him. Thrilling. The closing “Mind Eraser” packs similar heat, kicking off with a meathook riff before settling into a churning mid-tempo groove. The results sound not a million miles away from their own “Psychotic Girl” retooled by Them Crooked Vultures.

At these moments The Black Keys punch as hard as they ever have, but just as often they’re slinking towards the dancefloor. El Camino moves away from the rootsy gospel-blues textures of recent records in favour of something sleeker and snappier. The soaring “Nova Baby” boasts a shimmering pop chorus that wouldn’t sound out of place wrapped around the tonsils of Danger Mouse’s old buddy Cee Lo Green. “Sister” is even better. A kissing cousin to the Stones’ “Miss You”, it traces the missing link between Ardent Studios and Studio 54, stopping off midway to unzip a strafing, Isley Brothers-inspired fuzz guitar solo. A similar spark runs through “Stop Stop”, a driving soul groove about a(nother) bad news woman who is “wound up like a weapon, you got an evil streak”.

You search for signs of weakness but struggle to find any – aside, perhaps, from the middling “Money Maker”. This is both a supremely confident record and a ridiculously enjoyable one. A decade into their career The Black Keys have not only outlasted their more celebrated peers but outstripped their own past achievements. El Camino feels like the dawn of greatness.
Graeme Thomson