The second of James Ellroy's LA Quartet novels to be adapted for the screen. Starring Josh Hartnett, Scarlett Johansson and Hilary Swank. 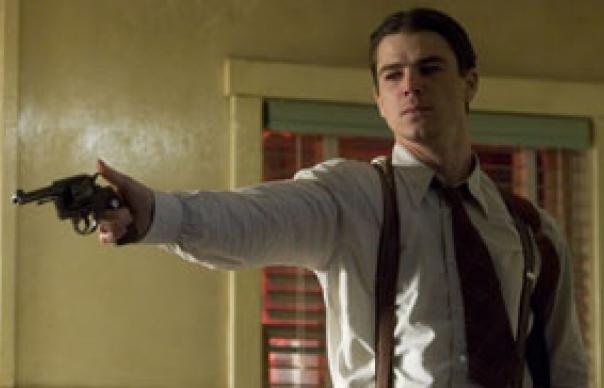 Los Angeles, 1947. Assigned to solve the murder of “the Black Dahlia”, an aspiring Hollywood starlet, two cops, Leland “Lee” Blanchard (Aaron Eckhart) and “Bucky” Bleichert (Josh Hartnett) find themselves succumbing to various erotic obsessions – with the dead girl, wealthy heiress Madeleine Linscott (Hilary Swank) and Lee’s girlfriend, former call-girl Kay Lake (Scarlett Johansson). The second of James Ellroy’s LA Quartet novels to be adapted for the screen, almost a decade after Curtis Hanson’s triumph with LA Confidential, The Black Dahlia boasts a similar visual Žlan – a meticulous evocation of its period, all sharp suits and sleek sedans and bad-girl pouts. Yet it’s a very different film than its predecessor.
Ellroy’s source novel is based on a true story: the brutal murder, in 1947, of movie starlet Betty Short, which became one of the most notorious unsolved murders in Hollywood history. Ellroy’s own mother was strangled in 1958, and the author has explicitly drawn connections between the tragic, violent deaths of these two women. De Palma, a surgeon’s son, with a taste for the lurid and a mile-wide streak of cruelty in him that rivals his hero Hitchcock, clearly riffs on this shocking, sensationalist material.
The film revels in Ellroy’s evocation of a corrupt, seedy and venal post-war LA, where everyone’s on the make, constantly hustling, whatever the cost. The opening sequence finds soldiers beating up civilians, cops piling in to take a pop at both sides, blows seemingly exchanged for the sheer, hell of it. This is a lawless town, devoid of any moral centre.

Hanson’s film benefited from the onscreen pairing of Russell Crowe and Guy Pearce, whose brute intensity and physical presence Aaron Eckhart and Josh Hartnett initially appear to struggle in vain to equal. Eckhart acquits himself well enough, but as his obsession with the murdered girl sends him into paranoia and madness, he retreats from the narrative – which focuses instead on the romantic relationships between Hartnett and co-stars Scarlett Johansson and Hilary Swank. On face value, their performances seem stilted, but you sense that De Palma is playing subtly, artfully, with the hyper-stylised melodramas of film noir standards like Mildred Pierce or Kiss Me Deadly.

Arguably, the performances aren’t necessarily the chief draw here. In a recent onstage interview at the Edinburgh Film Festival, De Palma admitted that his primary interests these days, as a director, are visual: the onscreen exploration of certain images and sequences, the resolution of various spatial challenges. The influence of Hitchcock has left him with an unrivalled compositional sense, one that’s apparent in this film’s major set-pieces – notably, a crane shot that manages to encompass, in a single take, both a messy shootout in a tenement, and the simultaneous discovery, a block away, of the murdered Black Dahlia; and a breathless race up a staircase (and subsequent fatal plummet to earth) which the director invests with all the flashy virtuosity of Vertigo. De Palma’s homage to noir classics occasionally seems intrusive: Bucky’s first meeting with the Linscott family, for example, sees the film shift abruptly, and inexplicably, into the first-person – a nod (for those in the know) to Robert Montgomery’s 1947 Chandler adaptation The Lady In The Lake.

There’s a distinct sense of exaggeration and artifice here – scenes lit as if back-projected, props (newspapers, in particular) ever-so-slightly too large. Not for nothing did legendary critic Pauline Kael once describe De Palma as having “the wickedest baroque style in American cinema”. Strict realism, here, isn’t the point. As befits a mystery set in the space between the dream factory of Hollywood and the sordid reality of LA, this is a movie – and we’re never for a moment allowed to forget it.