No irony. No significant changes. No problem! 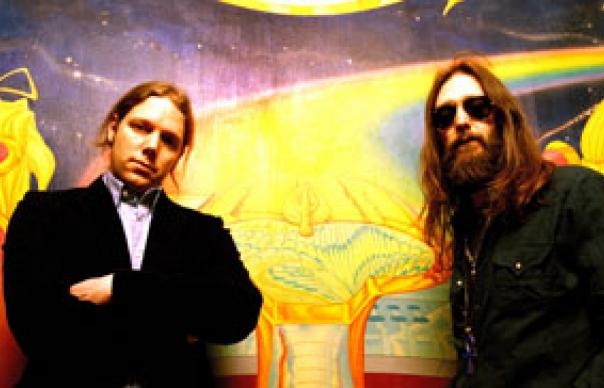 Seven years is a long time, to be sure – but not, it seems, long enough for The Black Crowes to get around to significantly expanding their palette of influences. The silence-breaking Warpaint, like all The Black Crowes’ previous forays, going back to 1990’s impudent debut, Shake Your Money Maker, operates comfortably inside parameters defined by The Rolling Stones, The Band, The Faces and Creedence Clearwater Revival.

Fortunately, Warpaint also shares with its predecessors the fact that it is animated by, and suffused with, such startling straight-faced passion and instrumental virtuosity that the reflexive mutterings about pastiche which have dogged Black Crowes’ every step sound, measured against this heartfelt tumult, like the most egregious pettifoggery. One could, one supposes, imbibe a hearty suck of lemon and observe that a track like the great, swaggering Zeppelin-ish boogie “Movin’ On Down The Line”, liberally laced with harmonica, is entirely (if meticulously) assembled from period detail, right down to Chris Robinson’s insistence on being the last man alive to address his listeners as “sisters” and “brothers”. One would be missing the point: Warpaint rocks, all the more thrillingly for its utter guilelessness.

The Black Crowes of this album are not quite the same group that made 2001’s indifferent Lions album. They’ve joined the exodus from major record companies to release this on their own label, and they introduce two new members. North Mississippi All Stars frontman Luther Dickinson replaces long-serving guitarist Marc Ford, while the contributions of recently-arrived keyboardist Adam McDougall amount to one of Warpaint’s defining characteristics. His frenetic tinkling on exuberant opening track and purpose-built rabble-rouser “Goodbye, Daughters Of The Revolution”, and “We Who See The Deep” recalls Ian Stewart’s malevolent honky-tonk underpinning Exile On Main Street, and his electric piano shimmering beneath the crescendo of the colossal, vaguely Ryan Adamsish, ballad “Oh Josephine” brilliantly emphasises the melodrama of what is certainly the best thing on the album, and might be the best thing the Crowes have ever recorded. It’s another defining characteristic of Warpaint, indeed, that it reminds that for all Black Crowes’ belligerent rock’n’roll posturing, they can be consummate balladeers – the mandolin-iced “Locust Street” is gorgeous.

Warpaint does, however, fall somewhat short of the triumphant comeback The Black Crowes set their 10-gallons at. It’s very difficult to follow the well-trodden – indeed, by now, paved, signposted, floodlit and regularly punctuated by picnic facilities – path they’ve chosen without ever stumbling into cliché, and a couple of tracks, notably cod-gospel non-event “Walk Believer Walk” and plodding metal jam “Evergreen” inspire, on repeated hearings, irresistible twitching over the “Skip” button. At their best, though, Black Crowes are still ringing fabulously true, a continuing and useful reproach against the temptations of obscurantism and irony.