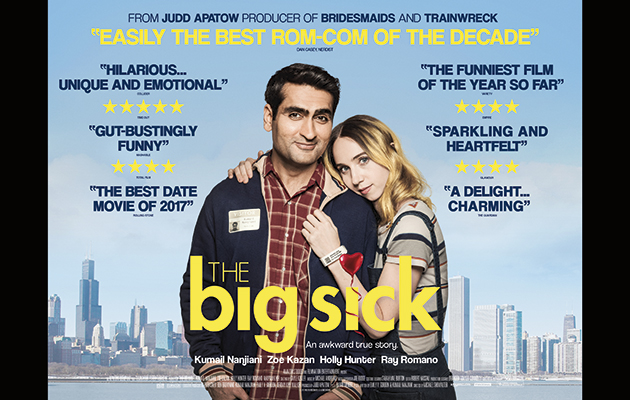 In June, the Pakistani-born comedian Kumail Nanjiani took to Twitter to outline his love for Richard Curtis’ film, Four Weddings And A Funeral. “I started stand-up cuz of Hugh Grant’s best man speech in the beginning,” he gushed. It transpires that a chance meeting with Curtis had snowballed to the extent that the filmmaker sent Nanjiani four frames from his personal reel of Four Weddings. Such a big-hearted gesture is worthy of one of Curtis’ films; but it is also true of The Big Sick, an autobiographical meta-comedy charting Nanjiani’s courtship with his future wife, Emily V Gordon, starring Nanjiani and co-written by Nanjiani and Gordon.

“The Big Sick” is a mysterious illness that suddenly strikes Emily (played by Zoe Kazan) after she and Nanjiani have split up. Their courtship had been smooth and exciting but Nanjiani develops commitment issues: marrying a woman of his choosing from outside his religion and community would be an unforgivable slight. “I can’t lose my family,” he tells Emily. Now she is seriously ill and Nanjiani finds himself waiting around intensive care in the company of Emily’s bemused parents, Beth (Holly Hunter) and Terry (Ray Romano).

Working with director Michael Showalter and producer Judd Apatow, Nanjiani and Gordon have crafted a deft and appearling film that addresses subjects ranging from cultural change to the unhappy lot of the Uber driver. Nanjiani is likably geekish while Kazan is smartly understated. Hunter and Romano, meanwhile, bring dramatic heft to what could otherwise be generic supporting roles.