Roll up for the definitive remaster of The Fab Four’s car-crash Christmas television special... 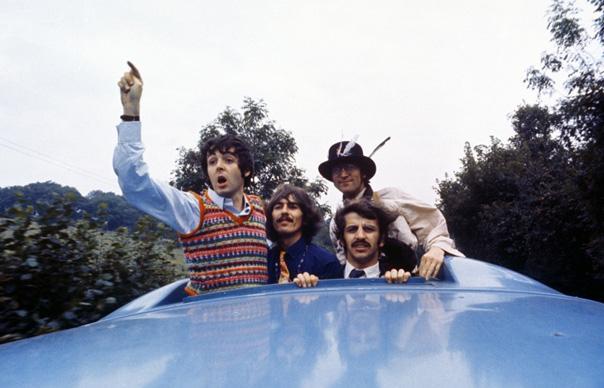 You say you want a revolution? We’d all love to see the plans.

And here they are: a circle divided into segments, each representing one zany episode in an hour-long filmic trip known as Magical Mystery Tour. Paul McCartney displays the ‘score’ of the film in one of the DVD’s Extras, but admits that piece of paper was the only advance plan. Otherwise, when The Beatles boarded a coach with a film crew, actors, hangers-on, extras fanclub officials and The Bonzo Dog Doo Dah Band on September 11, 1967, there was no end in sight.

Anyone with even the most cursory working knowledge of The Beatles will feel they know Magical Mystery Tour: roll up!, the bus careering round the racetrack, and all that. Yet it has rarely been screened in full since its BBC premiere on Boxing Day 1967, and previous video releases have been poor-quality dubs. This restoration, with revealing special features, finally gives the piece its due.

Viewing the film then must have been a vastly different experience from watching it now (and not only because it was transmitted in black and white). The Beatles were at their critical and creative height, even as the psychedelic cauldron was just coming off the boil. Incredibly, no one from the Beeb asked to view the material until shortly before transmission. If they had, they might have balked at the realisation that the wealthiest group on the planet were smuggling a lysergic, low-budget home movie into the Christmas schedules.

A few weeks before filming began, they spent a week with the Maharishi in Bangor on a Transcendental Meditation camp. While there, they received the devastating news of Brian Epstein’s death – the epochal moment that marked the group’s ensuing three-year disintegration. Magical Mystery Tour promises wonders, adventure, surprises, but behind the flimsy curtain of illusion is a forced hysteria; a tail-chasing quest and a scattering of bitter-tasting comic interludes. Softened up by the Petula Clark Show, TV audiences may well have found it baffling, even some kind of betrayal, with its Godardian editing techniques, crumbling storyline, and borderline-manic cameos (Victor Spinetti as a spluttering army recruitment officer; Ivor Cutler as Buster Bloodvessel, an unsmiling, severe tour guide). It’s Python-esque and just plain silly at times, but the ‘dialogue’ and voiceover feel sarcastic and slightly bullying, like a drunk on a train who loudly wonders why no one’s having a good time.

Meanwhile the four ex-moptops seem too self-conscious to get in the mood. A tight-lipped George keeps his shades on. We see almost nothing of John for the first half hour, though he steals the show at the end as a greasy Italian waiter, literally shovelling heaps of overcooked spaghetti onto a dining table. Ringo banters and needles his larger-than-life Aunt Jessie. Paul remains a tanktopped presence whose beatific state of mind is perhaps expressed in the “Fool On The Hill” clip.

The film is, of course, peppered with musical turns. The “I Am The Walrus” segment is vintage, flowered-up Beatles; technicolour paisley, wyrd animal masks and gleaming Rickenbackers; a parade of policemen ranged on a wall; a carnival of woolly-hatted ‘eggmen’. George busks “Blue Jay Way” by candlelight, on that very LA road. Viv Stanshall fronts the Bonzos in a psychotically risqué version of “Death Cab For Cutie”, complete with stripper hired in from the Raymond Revue Bar. “Your Mother Should Know” is a Busby Berkeley-style finale, shot in a Kent aircraft hangar, which almost didn’t happen due to a malfunctioning generator and a mutinous cast.

It’s a difficult one to grade. As a film, such a technical and narrative shambles only really merits a 3. As a Beatles artifact, though, it’s up in the 8s or 9s: completing this project did, after all, occupy all four members for the entire last three months of what was arguably the most significant year in the group’s existence so far. They shaped and controlled the edit; the outcome is as much a Beatles joint as one of their records. But Magical Mystery Tour also gets high marks as a captivating, discomfiting pop-cultural period piece. It could be The Beatles’ love/hate letter to GB, in all its pettifogging absurdity and geographical littleness. In the film’s faded-Kodak visual ambience, you sense the September light beginning to fail towards winter. The magic bus is a mobile music hall full of nostalgic baggage for vanishing communalities, pub singalongs, and even The Beatles’s own lost innocence (“She Loves You” is heard in one scene, played on a steam organ). You say you want a revolution? The wheels on the bus go round and round.