The Beach Boys – Made In California 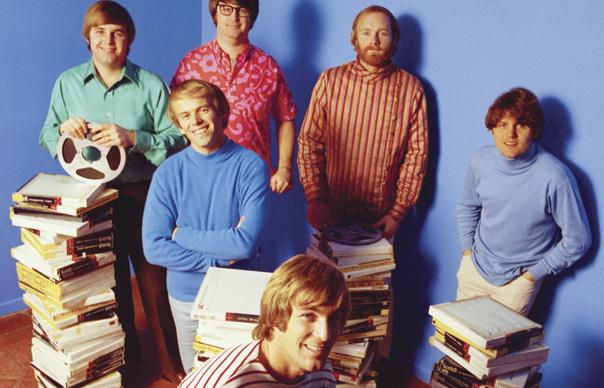 It has been the Beach Boys’ habit to confound those ready to predict their demise. Despite functioning (or, at times, dysfunctioning) largely as a de-luxe oldies act since before the Reagan presidency, there have been occasional glimmers of creativity throughout the latter stages of their career, with perhaps the biggest surprise coming last year, when they marked their 50th anniversary not just with a 73-concert tour featuring all surviving original members but with an album of new material that was at worst tolerable and at best excellent.

But there are, of course, two groups called the Beach Boys: the celestial choir that first caught the ear with the stained-glass harmonies of hits from “Surfer Girl” to “God Only Knows”, and a second outfit that emerged much later, a group whose voices (like those of The Band) came together as individual sounds, each with its own grain, rubbing against each other to create little abrasions that mirrored the internal tensions of an institution frequently riven by disputes but held together by bonds of blood and commerce.

That second group began to show itself when Brian Wilson’s soaring falsetto lost its unblemished purity and Dennis Wilson, the youngest of the three brothers, stepped out from behind the drum kit with his own songs and his hoarsely compelling lead vocals. The personalities of each member came into clearer focus: they were not, after all, merely five indistinguishable versions of the same person. Their music became even more interesting, if much less predictable and consistent.

As time goes by, that phenomenon becomes easier to identify and appreciate. Twenty years ago, with Dennis already 10 years in his grave, a box set titled Good Vibrations marked the group’s 30th anniversary, assembling the hits alongside a substantial quantity of rare material. Since then much has happened, notably the death from cancer of Carl Wilson in 1998, the rebirth of Brian’s public career — symbolised by the triumphant 2004 restoration of the lost masterpiece Smile — and the atomisation of the core group into at least three performing units. Made In California, compiled to celebrate last year’s golden jubilee, offers – in the words of Mike Love – “a window into all the various eras of the Beach Boys and a peek into things that were less well known or simply unreleased.”

Inevitably depleted by previous raids, the vault of unseen treasure will nevertheless continue to yield gems and new perspectives for a few more anniversaries yet. If Mike Love’s 1979 composition “Going to the Beach” is a trifle to please only the most undeveloped palate, the many treats for the hard core include glorious acapella mixes of Sunflower’s “This Whole World” and “Slip on Through”, the sumptuous instrumental track from Glen Campbell’s “Guess I’m Dumb” (recorded during the Beach Boys Today! sessions), Dennis’s unreleased and epically yearning “(Wouldn’t It Be Nice to) Live Again”, “Don’t Worry, Baby” with an alternate (and slightly inferior) lead vocal, three excellent and previously unheard Phil Spector covers — “You’ve Lost that Lovin’ Feelin’” (with Brian’s lead vocal) from the Beach Boys Love You sessions in 1976, Carl singing “Da Doo Ron Ron” from 1979 and Brian and Mike duetting on “Why Don’t They Let Us Fall in Love” from 1980 – and excellent unreleased versions of “Soul Searchin’” and “You’re Still a Mystery”, produced by Brian, Andy Paley and Don Was in 1995.

A selection of live tracks is highlighted by three songs — “Wendy”, “When I Grow Up (To Be a Man)” and “Hushabye” — recorded at the BBC in 1964, during their first UK visit, and by an exquisite version of “Only With You” from Carnegie Hall in 1972, just prior to the release of Holland, with Carl and Dennis sharing the lead on what may be the loveliest of all the group’s songs.

The hits are here, of course, from “Surfin’” in 1962 to “Kokomo” in 1988, but some of their most startling material has always been found down the back of the sofa, among such relatively unconsidered trifles as “In The Back of My Mind” (from The Beach Boys Today!), with its still-astonishing orchestral arrangement, and “Angel Come Home”, a song written by Carl with his occasional collaborator Geoffrey Cushing-Murray, sung by Dennis and left to languish on the 1979 collection titled L.A. (Light Album). In those two songs, recorded 15 years apart, the second of the two bands called the Beach Boys stands revealed: one capable of the most beautifully textured and exquisitely pain-racked white soul music ever made.
Richard Williams

Q&A
MIKE LOVE
Did you come across any nice surprises as you went through the archives?
There’s a song called “Going to the Beach”. I wrote it and we all recorded around the time we were doing the Keeping the Summer Alive album, maybe it was 1979 — and I’d forgotten all about it. Here it surfaces, and I’ll be darned if it isn’t a great song. It kind of harks back to the old “Surfin’ USA” days. We’re doing it on our concerts these days, in the encore section.

Looking back at the 50th anniversary tour and album, what are your thoughts?
What the anniversary established was a couple of things. One, that we can get in the studio together and still sound great. Listening to the songs coming back through the speakers, with all the harmonies and so on, it kind of harked back to the mid-60s. Both Brian and I remarked on that. It was kind of like sonic déjà vu. In terms of the shows we did, there were originally scheduled to be 50, but it actually expanded to more like 73. That was done by agreement that we would all put aside our individual pursuits and do this fixed number of shows. It was a really good thing to have done, and now we’re back on our merry way.

Could it happen again, on tour or in the studio?
I don’t really know. I know they’ve announced that Brian is working on a solo album. He may have two or three projects he’s working on, so he’s pretty busy. As far as getting together like that again, it remains to be seen. I would like to write songs with my cousin Brian. I’d be up for doing that. I’ll leave it there.
INTERVIEW: RICHARD WILLIAMS