The Assassination Of Jesse James By The Coward Robert Ford 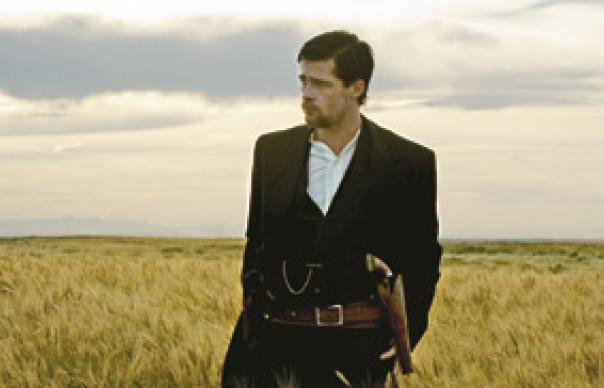 “Jesse James was a lowdown thief, a pervert and a sonofabitch,” Sam Fuller declared in his autobiography, A Third Face. “But you couldn’t show that stuff on a screen back then. The whole truth didn’t help get films made.”

I Shot Jesse James (1948) was Fuller’s first picture, 10 days in the making, and filmed entirely on a Republic Studios backlot. Even biting his tongue, he made a more arresting entry in James-ian mythology than such celebrated auteurs as Nic Ray and Fritz Lang, who preferred to print the legend. Why mess with America’s favourite outlaw? Robin Hood with a six-shooter, Jesse James has inspired more movies than Billy the Kid or Butch and Sundance put together.

Central planks in the Jesse James story were embedded in the public imagination early on, even during his lifetime. The fact that he’d tried to surrender after the civil war only to be shot in the chest; the maiming of his mother in an ill-advised Pinkerton raid on his home; and the important consideration that his robberies targeted supposed Yankee carpet-baggers: the banks and the railroads. A traditional ballad that crops up in many movies, including Fuller’s, lays it on thick: “He took from the rich and he gave to the poor, He’d a hand, and a heart, and a brain.”

Fittingly enough, Nick Cave does the honours as a saloon troubadour in director Andrew Dominik’s rueful and elegiac film. Based on Ron Hansen’s novel of the same name, and borrowing from it large chunks of decorously antiquated narration, The Assassination Of Jesse James By The Coward Robert Ford breaks with tradition by sticking to the sorry end of Jesse’s career. That is, after the disastrous raid on Northfield and the breakup of the James-Younger gang. Heroics are nowhere in evidence, and the myth gets short shrift from Jesse himself (a dyed-dark, brooding Brad Pitt). “It’s all lies,” he gently disabuses his most avid acolyte, 19-year-old Robert Ford (Casey Affleck).

This Jesse is not about to hand a red cent to the poor. Instead – in the film’s first and only robbery – we see him beat a railway guard with such excessive brutality even his partners are shocked. Pitt’s Jesse James may not be Fuller’s lowdown pervert, but he’s a sonofabitch if you cross him – or even if he suspects that you might.

In this, the character bears some resemblance to Mark Brandon Reid, the garrulous Aussie sociopath ferociously played by Eric Bana in Dominik’s only previous movie, Chopper (2000). But this is an infinitely more reflective and self-conscious piece, and where Bana/Reid revelled in his volatility and his tabloid fame, a ruminative Pitt/James carries his celebrity heavily; like his propensity for violence, it is an affliction he appears to regret but cannot control; the cross he has to bear. Morbidly paranoid, he’s left alone to ponder which of his associates will be the first to betray him.

This is Brutus and Caesar (the story Sam Fuller originally had his eye on), and it’s the story of Judas Iscariot. In Dominik’s movie the assassination takes place on Palm Sunday, and Judas – Ford – enjoys considerably more screen time than his victim.
“People take me for a nincompoop,” Bob admits to Frank James (Sam Shepard) early on. “I have qualities that don’t come shining through.”
That’s putting it mildly. The new makeshift James gang is a collection of dim opportunists and layabouts, mostly cousins and neighbours (they’re played with amiable flakiness by Jeremy Renner, Chris Speers, Garret Dillahunt and Sam Rockwell as Bob’s go-along brother, Charlie), but even in this unprepossessing crowd Bob is a standing joke, the designated boob. Frank can only shake his head and give him a wide berth.

A desperado in his dreams, Bob idolises Jesse so fervently it’s as if he wants to pull on his boots in the morning. And he suffers mightily for it; this long movie describes Ford’s time in Jesse’s orbit as a series of abject disappointments, humiliations and indignities, mostly of his own making. Affleck doesn’t sentimentalise Bob’s pinched and wretched narcissism, but as the slow, sad coda makes clear, the assassination was Ford’s tragedy as well as Jesse’s, an infamous folly he would live to regret and replay – several hundred times in fact, for an audience of eager rubberneckers.

Filmed by regular Coens DoP Roger Deakins in languid, wispy vignettes, the lens sometimes smudged with Vaseline, this is the West as Eadweard Muybridge might have photographed it if he’d only taken his experiments in kinetic motion a stage further. Malick, Kubrick and Cimino would surely recognise a kindred spirit in Dominik; this flagrantly uncommercial enterprise seems designed as a heroic folly in and of itself. It’s another weighty monument to the death of the West, and within a whisker of the masterpiece Dominik was evidently shooting for.