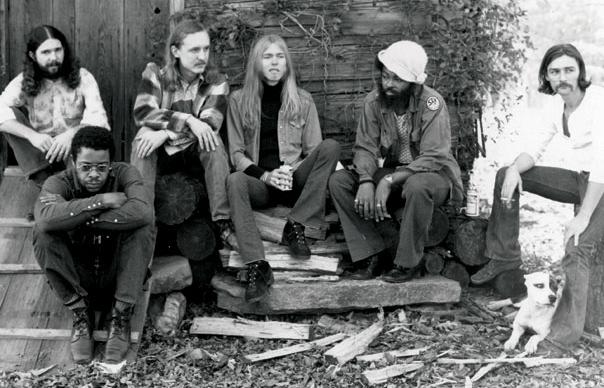 The Allman Brothers began work on their fifth album at Capricorn Sound Studios in their adopted hometown of Macon, Georgia, in October 1972. It must still have been as much as they could do to get out of bed in the mornings. It was only a year since the group’s leader, influential guitar prodigy Duane Allman, had been killed in a motorcycle accident in Macon, aged 24. The group had not been able to bring themselves to replace him, instead promoting his abundantly capable duelling partner Dickey Betts to sole lead guitarist to finish 1972’s Eat A Peach, and eventually fleshing out their soulful boogie with the addition of pianist Chuck Leavell.

On November 11, 1972, not long after the Allmans had cut an amiable choogle called “Ramblin’ Man”, bass player Berry Oakley’s motorcycle collided with a bus, a few blocks from where Allman had crashed just over a year earlier. Oakley died a few a hours later; he, too, was just 24 years old. An understandably careworn Gregg Allman later sighed to Rolling Stone’s Cameron Crowe, “It was so hard to get into anything after that second loss.”

Somehow, Allman – and the Allmans – summoned the will to continue, finishing Brothers & Sisters with new bass player Lamar Williams. The result was their indisputable commercial peak and arguable creative apogee – and at the very least, an extraordinary recovery from the loss of virtuosi the calibre of Allman and Oakley (the former, in particular, ranks as one of the most tantalising, heartbreaking, career-that-never-was hypotheticals in all of rock’n’roll). It’s likely that the sales and acclaim Brothers & Sisters gathered upon release were inflated somewhat by a forgivable sympathy vote. But if one can make the effort necessary to hear it as other than a brave and determined confrontation of grief – or distraction from it – Brothers & Sisters is a comprehensive summary of the virtues of what is now known as southern rock.

“Ramblin’ Man”, which became the album’s – and the Allmans’ – biggest hit, was a deceptive choice of lead-off single. It’s a cute, sweet country rocker with trilling harmonies, surely inspired in part by The Eagles’ debut album – with particular reference to “Take It Easy” – which had been released a few months previously. The rest of Brothers & Sisters is altogether more ambitious. It is more than anything else a showcase for Dickey Betts, who wrote most of the album, and stamped it with one of the great solo guitar performances: subtly melancholy on the slow blues “Jelly Jelly”, laying down the tracks for Stevie Ray Vaughn and subsequent blues swaggerers on “Southbound”, sprightly and frisky on the instrumental “Jessica” (now better known as the theme from Top Gear).

There are two versions of this reissue of “Brothers & Sisters”. The two-disc package contains the original album as well as a mildly diverting bunch of rehearsals, outtakes and a new track recently disinterred from the archive – entitled “A Minor Jam”, it is, regrettably, exactly what it says it is, for sixteen somewhat trying minutes. Of considerably greater interest is the concert performance included with the four-disc incarnation. Recorded live at San Francisco’s Winterland Ballroom on September 26, 1973, it captures the Allmans at their unbound best, for better (the meandering versions of “Jessica” and “Southbound” are glorious, unselfconscious recollections of a time when rock’n’roll musicians saw themselves as explorers of musical worlds yet unconquered) and for worse (there are drum solos). It ranks as a lost post-Duane companion piece to the live album which founded the reputation the Allmans were trying to protect – 1971’s At Fillmore East.

Brothers & Sisters would turn out to be as good as it got for the Allmans. Ahead lay drugs, hubris, fallings-out, ill-advised reunions and worse-advised marriages to Cher. But when they were great, the Allman Brothers were magnificent: defining their own time, and the parameters of a still-evolving genre. Southern rock started here.
Andrew Mueller

Q&A
DICKEY BETTS
It’s hard to imagine more difficult circumstances for an album to be recorded in. How close did you all come to giving up on “Brothers & Sisters” altogether?
Under the stress of losing band members at a young age we thought about breaking up the band, but decided to stick it out – and we’re glad that we did. We came up with a wonderful album under the worst of circumstances.

What do you think of the album now?
I still think it’s a great album to this day.

Specifically, what do you think of the version of “Jessica” that gets used as the theme for Top Gear?
I really don’t know much about Top Gear. That was a deal my manager made. Anytime my music gets heard I think it’s a great thing.”
INTERVIEW: ANDREW MUELLER