The Act Of Killing

A brave investigation of murder... 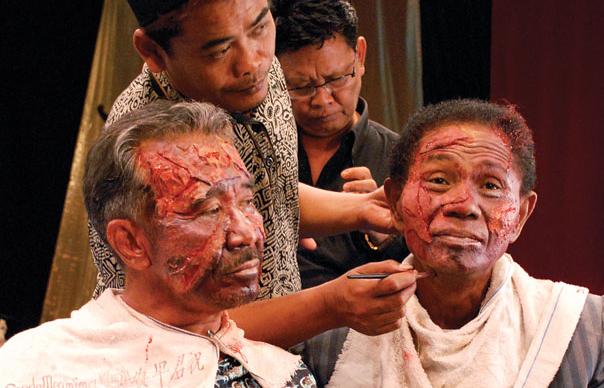 A brave investigation of murder…

Joshua Oppenheimer’s The Act Of Killing is – without exaggeration – a documentary like no other. It certainly takes the investigative docu form into some surprising areas – surrealist spectacle, behind-the-scenes ‘making of’, performance art – and it does it in ways that keep you asking yourself in disbelief exactly what you’re looking at. The film’s subjects are murderers – small-time hoods who were hired, following Indonesia’s military coup of 1965, to slaughter the enemies of the new regime, whether they were alleged communists or simply ethnic Chinese.

Subsequently, the killers not only got away with their crimes, but have been able to bask in their glory as glamorous hard men. Discovering how much they loved movies, and how fond they were of boasting about their exploits, Oppenheimer and his co-directors – Christine Cynn and various anonymous Indonesians – gave the guilty parties ample rope to hang themselves in front of the camera. Why not invite them to make their own films, re-enacting their murderous deeds?

The film’s subjects – notably a placid, affable-seeming old cove named Anwar Congo and his obese sidekick Herman Koto – happily accept the invitation, but the results are not always what you’d expect. Sometimes they stage predictable war or hard-boiled crime scenarios, but they also mount bizarre supernatural episodes and even mount an outrageously kitsch song-and-dance number involving chorus girls, a huge imitation fish and the theme from Born Free. Such scenes also offer the whale-like Herman a chance to air his penchant for grotesque drag.

Along with its moments of hideous farce, the film also offers straighter glimpses of the society that has let these men thrive. We see a rally of the orange-uniformed paramilitary organisation to which Congo and co are heroes, and a TV chat show on which the killers proudly point out that the Indonesian word for gangsters means ‘free men’. In the funniest scene, the clueless Koto makes a bid for political office, but can’t think of a more compelling campaign slogan than “I.. am … Herman!”, half-heartedly barked into a megaphone.

Black comedy aside, the cold truth hits home in Congo’s two visits to a patio where he used to perform his killings, and where he proudly demonstrates his garrotting style. On his second visit, however, the cracks in his calm exterior break open in alarming style: suffice to say, Congo’s body, despite himself, starts to express his bad conscience in a way that he has long refused to with words.

With Werner Herzog and Errol Morris involved as executive producers, The Act Of Killing leaves many questions unanswered – not only because the exact chronology of its episodes remains unclear, but also because, in luring Congo and co into exposing themselves, Oppenheimer could be said to have made himself complicit with his repellent subjects. The film might also have offered more historical context for its story, but there’s no denying that The Act Of Killing is a riveting and fiercely original piece of cinema – the bravest and most disturbing film of 2013.
Jonathan Romney