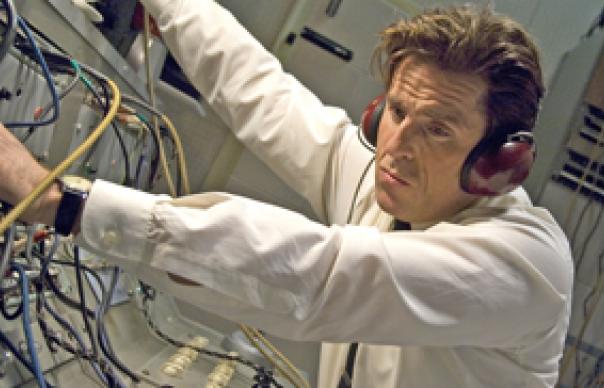 London, the early Sixties. Gay entrepreneur Joe Meek sets up his own production company in his Islington flat. There are some great records made – but Meek’s hallucinations, paranoia and drug intake threaten to derail his talent. And then, there is a murder.

When Margaret Thatcher chose the 1962 hit, “Telstar”, as her favourite pop song, she may have been indulging a youthful memory of its eerie Space Race melody. Possibly her advisors were aware of the circumstances of its creation: producer Joe Meek delivered the record from a home-studio in a flat on Holloway Road in north London, and it became the first record by a British group to reach number one on the American charts. Short of being a greengrocer from Grantham, Meek could hardly have been more symbolic of Little English pluck. But it’s highly improbable that the Iron Lady was aware that Meek, for all his entrepreneurial flair, was a tormented gay man at a time before homosexuality had been decriminalised, or that he killed himself after murdering his landlady.

So any consideration of Meek’s life faces a choice: whether to celebrate his genius, mock his eccentricities, or shine a light into his darkness. Because – whichever way you slice it, the story is loaded with all three. Nick Moran’s film is based on his and James Hicks’s 2005 stage play, with Con O’Neill reprising his performance as Meek. The director does his best to expand the drama by opening with a groovy blur of Routemaster buses, the 2i’s coffee bar, the neon hoardings of Piccadilly Circus, and other shorthand symbols of a London on the verge of Swinging.

But, inevitably, there’s a sense of confinement. Meek’s makeshift studio was located above a handbag shop – on the stair, in the bathroom, down the hall – so much of the action takes place at close quarters. Meek’s house band, among them Ralf Little (as guitarist Chas Hodges) and James Corden (as Clem Cattini on drums), are stationed in one room, while Meek is elsewhere, fiddling with knobs. He also has a morbid interest in the occult, which is exacerbated by the fact that his heroes, notably Buddy Holly and Eddie Cochran, are sending musical messages from the other side.

The set-up is half sitcom, half car-crash. Perhaps Meek did see his flat as a sonic fortress, but his mood-swings and his paranoia – both exacerbated by a recreational intake of amphetamine-based slimming pills – tend to crash into the laddish comedy. He comes across as an irascible version of Uncle Bryn from Gavin and Stacey, when by some accounts he was scarier than Phil Spector.

Of course, it would overstating things to suggest that Meek’s talent could be compared to Spector’s. He couldn’t read or play music, but he was a brilliant innovator. The rocket launch that opens “Telstar” was a flushing toilet played backwards, while cosmic sound effects were coaxed from a Clavioline keyboard. This, remember, was 1962. Kraftwerk were still in kindergarten.

Meek’s musical illiteracy meant that he struggled to communicate with his musicians. Here, that means saying “bum titty bum, twang twang”. Perhaps that is how he expressed himself. But the difference between now and 1962 is that camp talk is no longer the secret language of an oppressed minority. It is the spent tool of mainstream comedy. (Speaking of which: Jimmy Carr pops up in the film, browsing for suitcases.)

But let’s not be too harsh. Moran’s film is not empty nostalgia. It is not The Boat That Rocked. It should be filed alongside Stephen Frears’ Joe Orton biopic, Prick Up Your Ears, because its breezy exterior conceals a thoughtful consideration of a strange moment in British pop culture. Meek’s eccentric creativity may have been short-sighted – the film shows him dismissing a demo-tape by The Beatles – but it took root.

Meek drafted the template for boy bands. Fifteen years after “Telstar”, the world was in the grip of Rollermania, a contrived sensation curated by another gay huckster, Tam Paton. If the comparison seems contrived, remember that Bay City Rollers’ copyists The Dead End Kids had a 1977 hit with “Have I The Right?” a cover of a stomping Meek production for The Honeycombs, which packed an unnoticed gay subtext in its lyric. Here, to expose the song’s hidden meaning, “Have I The Right?” is the soundtrack to a Moroccan holiday.

Musically, Meek’s contribution is harder to quantify. He made records at a time when the juice was being squeezed from rock’n’roll. In those pre-Beatles years it made sense to wrap British youths in spangly jackets and send them into the provinces, supporting the likes of Gene Vincent (plausibly played here by Carl Barat). What the film is less good at is unpicking the weird power of Meek’s sound experiments. His interest in electronics started early, and his fascination with space was fanned by a stint as a radar operator in the RAF. (Listen to Thurston Moore’s 1997 recording of “Telstar”, and it’s plain that this strangeness endures.)

So, Meek was a space cadet. But was he also a punk? Releasing his own records may have been a side-effect being unable to fit in anywhere else, but he was also singular in his pursuit of an original sound. His business partnership with Wilfred Alonzo “Major” Banks seems implausible, not least because Banks is played by Kevin Spacey as a refugee from a Biggles adventure, but this was the era of the stiff upper lip.

Where did it all go wrong? Moran offers the pills, Meek’s shame at being arrested for cottaging, and a conspiracy of spurious lawsuits as catalysts for the producer’s collapse. But the suspicion remains that the real Meek was stranger still. Moran maps the decline, but doesn’t quite inhabit its paranoid tempests. Hearing human voices in the recorded meowing of a cat does not sound like the working of a stable mind.

And, just as you think the story couldn’t get any more bizarre, the titles roll, and it becomes apparent that Ralf Little’s character, Chas Hodges, later found fame with Chas’n’Dave. Another bit player was Mitch Mitchell, later of the Jimi Hendrix Experience, while the surname of the guitarist, Ritchie, was Blackmore.

After falling out with Meek, Major Banks sought his fortune in wheelie bins and artificial Christmas trees. You couldn’t make it up.