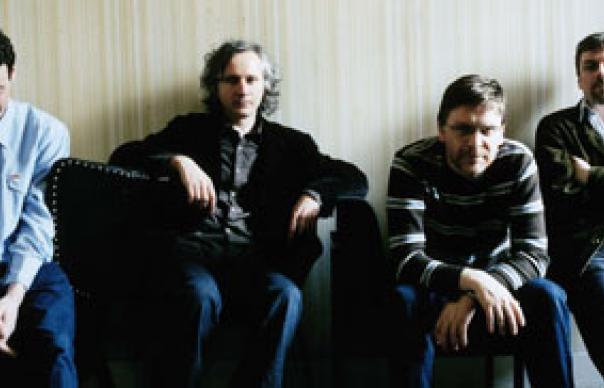 Around 20 years ago I travelled to King Tut’s in Glasgow to meet Teenage Fanclub. They were on the cusp. An American magazine had declared them “hot”; David Geffen’s cheque book was agape. But, sitting in the darkness of the Tut’s bar while a Warhol-impersonator shot Super-8 film, they gave the impression of being allergic to hype.

And so it went on. Two decades of Teenage Fanclub have produced glorious records, topped by Bandwagonesque and Grand Prix, but with sporadic moments of melodic beauty throughout. They have drifted in and out of fashion, making an art out of being unassuming: a habit which risks making them look ordinary; which, surely, they are not.

In the absence of self-promotion, a critical shorthand has developed. This suggests that, a) all Teenage Fanclub records sound the same, and b) the sound they share is the sound of Big Star. (Less refined critics would cite The Byrds. Your cool big brother might suggest the Raspberries. ) This analysis only works if you don’t listen to the records. Their last LP, 2005’s Man-Made, was gentle and introspective, with none of the riffing which had previously been the backbone of the Fanclub sound.

Shadows was recorded between August 2008 and January 2009 in rural Norfolk, and the record is dense with the mists and mellow fruitfulness of late summer. But if first impressions are sunny and optimistic, the sweet melodies conceal a melancholy mood. It’s also – and this is a slightly shocking realisation – a fully mature work. These Boy Hairdressers are now men, deep in the late summer of their lives. As Raymond McGinley’s elegiac “The Fall” puts it: “When I light a fire underneath what I was/I won’t feel sad, only warmed by the loss.”

Five years on from Man-Made, what else has changed? Well, no musical revolutions have taken place: the Fanclub haven’t gone grime, and their Quo-ish tendencies are still AWOL. In the continued absence of the boogie, the group – Norman Blake, Raymond McGinley and Gerard Love, plus drummer Francis Macdonald and steel guitar-player David McGowan – are left free to explore their sensitive sides with greater confidence.

There’s a sense, too, that musical fashions have fallen back in time with the group’s sensibilities. A gentle folksiness infects some of the songs here, possibly due to the presence of Scots folk veteran John McCusker, who adds understated strings. Elsewhere, McGowan’s steel guitar brings a plangent edge to McGinley’s “Today Never Ends”, and the melancholy tug of Gerard Love’s “Sometimes I Don’t Need To Believe In Anything” is powered by an understated horn arrangement. It’s striking to recall that the Fanclub used to be mentioned in dispatches as a kind of melodic extension of grunge; now they betray an almost hippy sensibility.

What you can’t ignore is the singing. The Fanclub have always done harmonies, but they’ve never sounded more confident. Comparisons with the Beach Boys used to seem fanciful, but there’s a lovely moment on the pastoral “Into The City” where the music drops away, leaving a beautifully overlapping harmony that is distinctly Californian.

It’s unsporting to pick favourites, but Shadows contains some of Raymond McGinley’s best work. The steel guitar colours Love’s lovely “Sweet Days Waiting”, which celebrates the first light after a lost soul’s
dark night, and is carried on a tune as weary and beautiful as anything on The Velvet Underground’s Loaded.

But enough comparisons. Yes, Teenage Fanclub are classicists, and you might catch a flavour of Lou Reed here, or Alex Chilton there, but they’ve been doing this long enough to deserve some respect. Shadows is full of drowsy sweetness and mellow doubt: the sound of a great group ageing gracefully.
ALASTAIR McKAY