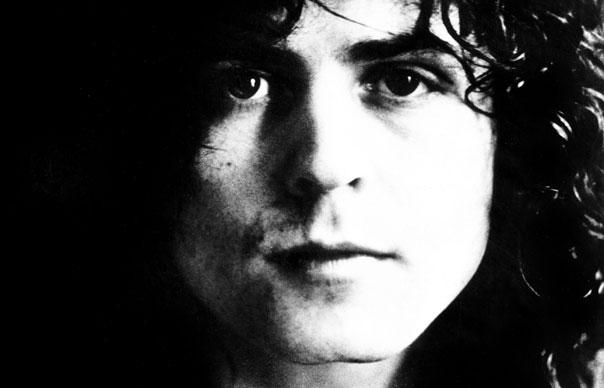 Electric Warrior – released in September 1971 – is the fundament of glam rock. Falling between T.Rex and The Slider, and released in September 1971, its achievement is remarkable given that it came almost a full year before the release of Roxy Music and The Rise And Fall Of Ziggy Stardust…. T.Rex at this moment still offered the rarefied version of what the next wave (Mud, Sweet, Glitter, Slade) would soon convert into hod-carriers’ high camp – rock ’n’ roll for rouged roofers. The secret lay in the time-travelling eclecticism of all three; Bolan had been laundered through the washing machine of successive 60s subcultures, from Mod to psychedelic folk, but already in Tyrannosaurus Rex the nostalgic troubadour impulse had been lavishly embellished with orientalist, rococo degree of pantomime that bordered on kitsch – onyx statuettes glimpsed through aspidistra leaves.

Bolan’s very public friendship with John Peel ensured plenty of radio exposure in the previous years, but he began to cut the DJ dead around now, jumping from the sinking Perfumed Garden/Middle Earth ship and restyling himself as a galactic rock star retooled for the 1970s. Even the ambience of Tony Visconti’s production is very different from the Joe Boyd/John Wood-style sound of folk-rock: Bill Legend’s drums swathed in a claustrophobic flutter-echo; Mickey Finn’s stipplings of congas and bongos; supermarket string arrangements; thong-tight humbucker fuzz from Bolan’s guitars; and his breathy vocal close up to the mic and shorn of its woolliest Tyrannosaurus Rex tics. No longer the clatter of a band in a room, the soundworld of Electric Warrior is an artificial acoustic palace of mirrors, curling smoke and follow-spots.

“Mambo Sun” is an irresistibly seductive entry point: a sultry love-torpedo that knows what it wants and knows how to get it. Up next is “Cosmic Dancer” – a tune I can’t hear without recalling choreographer Michael Clark’s brilliant solo interpretation in the early 90s – whose luscious strings afford a taste of suave romanticism with none of Bolan’s former scene-scoffery. That cynicism rears its head on “Rip Off”, though you have to listen past some of Bolan’s absurdest couplets to date (“The President’s weird/He’s got a burgundy beard”? “Mountains of the moon/Remind me of my spoon”?).

Bolan’s oral obsession – first noted on “Juniper Suction”, a tribute to girlfriend June Child’s skills as a fellatrix – resurfaces on “Jeepster” in slightly unsettling fashion: “Girl I’m just a vampire for your love… and I’m gonna suck ya!” Then of course, there’s “Get It On (Bang A Gong)” (the title was originally the other way round, until US jazz rockers Chase beat them to the punch with a different “Get It On” – thousands of sleeves needed to be overprinted). A brilliant pop single by any measure, fizzing with Spangles hysteria, you can hear the erotic sugar rush raging on Bolan’s pent-up count-in.

EXTRAS: This edition includes the more sedate hit “Hot Love”, plus B sides “There Was A Time/Raw Ramp”, and “King Of The Mountain Cometh” and “Woodland Rock”, a smooth fusion of Chuck Berry and backwards-guitar psych. The bonus audio disc is a real treat, containing unheard alternative versions and startlingly intimate home demos recorded by a lone Bolan.

The ten track DVD included with the Super Deluxe Edition displays a band growing up scarily fast over a two year period. On Top Of The Pops in March 1971 T.Rex still presented as a duo – Bolan and bassist Steve Currie – with Finn on drums apologetically buried in the gyrating crowd. A full year before Ziggy’s appearance, Bolan looks every inch the glam prince, resplendent in silver pyjamas. By Christmas – now with the full Electric Warrior line-up, augmented by Elton John on piano – he’s sporting glitter blobs on his cheeks, pink loon pants and a Flying V. With its frugging dollybirds, coruscating reflective surfaces and inventive camerawork, it’s an absolute classic TOTP clip that screams ‘rock star’ from every angle. Official promos for “Get It On” and “Jeepster”, by contrast, are daringly minimal and starkly lit, filmed handheld against a black backdrop. Six months later, in footage from the Empire Pool Wembley (unused scraps from the Born To Boogie movie), he’s noticeably aged and filled out, a reminder that this heyday for T.Rex would be fleeting. Electric Warrior captures the group at a time when there was still a trace of innocent pleasure left, and this remastered edition does it full justice.
Rob Young

Q&A
TONY VISCONTI
How much planning went into the album?
There were no plans in those days! Electric Warrior was born amidst the chaos of a disastrous US tour. Marc’s management booked a little tour and at the same time I was back in New York on holiday. Whilst we were there I phoned [label boss] David Platz and was told that “Hot Love” was No 1 and they badly needed an album. We booked a little studio and did three tracks in New York: “Jeepster”, “Monolith” and “Girl”. By the time we left the US we had six songs recorded, then we came back to London and finished it.

Were you aware you were creating something special?
At times in the studio Marc and I wereabsolutely high on music. We were suddenly so clear about how to make a great record. I’ve had that since but that was the first time I’d experienced it. It was oozing from us.

Is still sounds incredibly fresh…
Most glam rock is sugary sweet and now sounds dated, but we were right at the beginning of that period. What happened immediately afterwards was glam rock, but we were simply making an organic rock’n’roll album with classic sounds. Everyone from Bono to Slash tells me that record was a major influence.
INTERVIEW: GRAEME THOMSON