Their final album, but a great introduction to a world of esoteric, hallucinatory music... 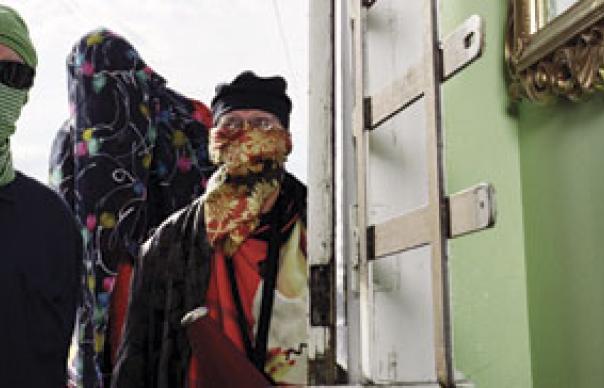 The death in 2007 of Charlie Gocher Jr – surrealist, prankster, and drummer with Sun City Girls since their inception –robbed the psychedelic underground of one of its most remarkable, unpredictable groups. In existence since the early 1980s, the Sun City Girls, with a lineup of Gocher, alongside brothers Alan and Rick Bishop, on bass and guitar respectively, released some of the most confounding records you’re ever likely to hear.

They’ve a back catalogue of well over 50 albums, cassettes, and singles, and over time their remit has stretched through dazzling free-rock, abstract acoustic improvisations, eerie forgeries of Third World traditional music, surrealist spoken word suites, and spooked requiems that sound like they’ve fallen from old Italian film soundtracks.

Their story is a wild one. Forming in Phoenix, Arizona, the trio spent the ’80s largely undercover, releasing a few limited LPs alongside their self-released Cloaven cassette series, playing baffling live shows with hardcore groups, and taking trips to Third World countries, during which they researched local music and occultism, collected instruments, and made field recordings, some of which have turned up via the Bishops’ Sublime Frequencies label.

They ‘broke out’ in the ’90s with albums like Bright Surroundings, Dark Beginnings and Torch Of The Mystics, but there was still something hidden about the trio – to know of them was to partake of arcane knowledge. Rick Bishop, a devotee of tantric goddess Kali, also collects and sells esoterica; he now performs snake-charming solo guitar as Sir Richard Bishop, and shares the Rangda trio with Ben Chasny (of Six Organs Of Admittance) and powerhouse percussionist Chris Corsano. Alan Bishop records solo as Alvarius B, and sometimes as his alter ego, the wiseass humorist and storyteller Uncle Jim.

All this means your work is cut out for you if you’re entering the weird world of the Sun City Girls for the first time. Their albums, Torch Of The Mystics (1990) and 1996’s mammoth 330,003 Crossdressers From Beyond The Rig Veda triple-LP set, are among the wildest psychedelic epics of the past 30 years. But beware – tread too far into these murky waters and you’ll encounter the horrific, lounge-chintz covers album Midnight Cowboys From Ipanema, or the stodgy improvisations of Live From The Land Of The Rising Sun. They’re possibly the only group whose triple-CD retrospective, Box Of Chameleons, featured all unreleased material and was at times forbiddingly impenetrable. As Alan Bishop once said to cultural critic Erik Davis: “We leave a few diamonds by the roadside, and we leave a few heaps of pterodactyl shit as well.”

Their final album, Funeral Mariachi, has them playing things relatively straight, and it’s definitely one of their ‘diamonds’. Recorded largely before Gocher’s death, and completed by Alan Bishop and long-time producer Scott Colburn, it’s free of the more oblique, scurrilous and downright frustrating sides of their temperament. Funeral Mariachi is luxurious in both recording quality and musicianship – most things are taken at a slow clip, like the opiate-drones and tablas of “This Is My Name”, which blossoms near its end with a lilting melody flourish from guitar. A cover of Ennio Morricone’s “Come Maddalena” touches the same nerve – indeed, the unsettled exotica of the Italian’s scores provides a good reference point for much of what the Sun City Girls are up to here.

There is still plenty of weirdness. The album opens with “Ben’s Radio”, which flips through scattered vocal turns and brash, drilling acoustic guitars like a child spinning a short-wave dial, the trio inventing hybrid languages through multi-colour glottal reveries. There’s an almost synaesthetic touch to the psychedelic qualities of Funeral Mariachi, with Alan Bishop’s banshee wail, best heard on “The Imam”, cutting through smoke-rings of reverb. He also resurrects that sound at the start of “Holy Ground”, where a hypnotic, surrealist chant gives way to an almost tender tune for fuzz-tone guitar and old-timey, humming organ. It’s a reminder that the Sun City Girls often peddle in warped, spooked nostalgia.

Funeral Mariachi is a great album, torn from the fabric of another time, paying tribute to Gocher and the multi-horned history of the Sun City Girls. Their more unhinged, trickster side, found on 330,003 Crossdressers, could perhaps be more in evidence, but that’s just being picky. This is as riveting and beautiful a valedictory address as you could hope for from these underground heroes.
JON DALE

Q+A Richard Bishop
You’re currently travelling through Syria and Lebanon. Research? Pleasure?
We actually just performed two evenings of shows here in Beirut. First night was the two of us together performing Sun City Girls material and the second night we did solo sets. Now that the shows are over I am in full pleasure mode with a little research thrown in.

Sun City Girls always had the travel bug. I can hear that musically: what else did you draw from your encounters overseas?
In a word: everything. Meeting and talking to the people, watching and sometimes participating in their ceremonial adventures, settling into and studying different aspects of life in foreign lands and realising that most of the time, it is much more intriguing and inspiring than anything from our own country.

You and your brother play telepathically. Has your relationship changed much?
Nope. We’re as close as ever. I will say Charlie contributed greatly to that idea of telepathy, so that is sorely missed, but the two of us are still capable of getting things done by any means necessary and that includes telepathy if we have to resort to it.
INTERVIEW: JON DALE