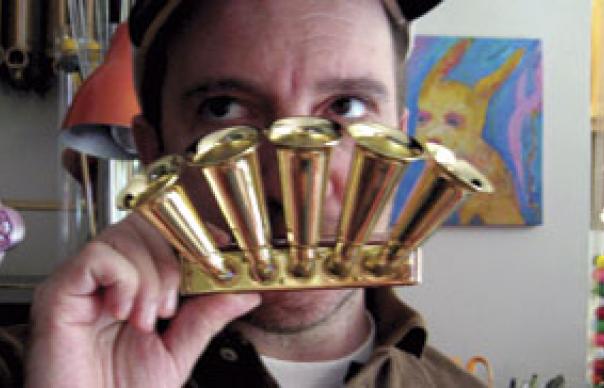 A product of Boston’s ’80s post-punk scene, Stephin Merritt created the Magnetic Fields in his own image. Wry, prickly, bookish, occasionally tender, he has carved out a prominent niche writing arch anti-confessionals that “emphasise beauty over convention”.

The 1999 triple album 69 Love Songs made him a doyen of perennially heartbroken, New York Times-reading arts grad scenesters. In this 85-minute documentary, filmed over several years but primarily covering the mid-noughties period where the Magnetic Fields made i and Distortion, Merritt emerges as a kind of American Morrissey: guarded, lugubrious, emotionally distant yet attracting real devotion, and seemingly always in character. “I had a bad experience with an acupuncturist in my youth,” he drawls, eyes rolling theatrically.

We see him pottering around Manhattan with his Chihuahuas, cycling like a drunk Jacques Tati, introducing the world’s campest CD collection – “Disco Ethel Merman?” – and “sitting in dark gay bars listening to thumping disco music that I don’t particularly like” in order to write. In his appealingly chaotic apartment studio dutiful band members play whisks and chimes fashioned from plastic cups while arguing over time-signatures. This is not …Spinal Tap.

You have to buy into Merritt’s persona to love The Magnetic Fields, and this is a fans’ film. It lacks an objective, questioning external voice. Instead, famous admirers are recruited but under-used. Peter Gabriel lauds his “conversational simplicity – these are great words”; Sarah Silverman babbles about the “poet inside with a mean outer shell”, while author Neil Gaiman (Merritt wrote the score for a musical version of Coraline) reveals he was so grumpy he “made Lou Reed look like little orphan Annie”.

Merritt’s methods are pored over but his motives are largely left unexplored. Beneath the carefully controlled exterior the film glosses over private turbulence. His childhood was peripatetic and hippiefied – his mother’s friend once tried to fix a radiator “by rubbing a green banana on it” – while Merritt has never met his father, Scott Fagan, a folk singer who has released several records. There is, oddly, also no mention of the hearing condition (hyperacusis) which to some extent dictated the anti-rock bent of his music.

Ultimately what drives Strange Powers isn’t Merritt but Claudia Gonson, who’s worked with him since the early ’80s and now combines the role of band mate, manager, “fag-hag, wife and mother”. The film gradually becomes a document of their odd-couple love story. It ends with Merritt leaving New York for LA to seek out soundtrack work, a move which leaves Gonson pondering “losing a huge chunk of my identity. Midlife crisis!” Her disarming honesty and obvious love for Merritt brings a welcome emotional charge to this entertaining but – perhaps aptly – rather aloof, narrow-focus documentary.
EXTRAS: None.
GRAEME THOMSON