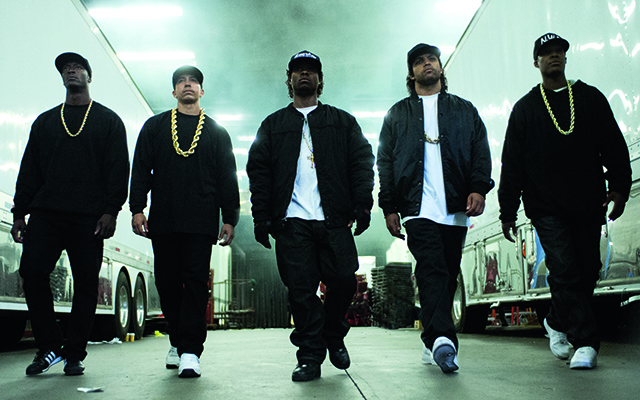 To do full justice to the NWA story you really need a multi-part HBO mini-series, ideally written by Richard Price and directed by David Simon. Instead, we have F Gary Gray’s 150-minute biopic: an initially valiant attempt to do justice to a sprawling, complex story that eventually succumbs to the pitfalls of a conventional music biopic. There is a lot of swearing, yes; but a lot more expository dialogue.

Sadly, Gray is unable to follow-up on such an exuberant first half. There is too much to focus on – multiple arrests, Cube’s departure, legal sidebars, Dre’s defection to Suge Knight’s Death Row Records, Eazy-E’s death from AIDS. Gray delivers them in programmatic narrative beats, while simultaneously swerving away from accusations of misogyny in the band’s lyrics, associations with extremist organisations and Dre’s assaults on woman.

Unlike the excellent Brian Wilson film, Love And Mercy, Gray’s film is untroubled by the creative act. Early on in the film, we see Ice Cube neatly jotting down lines in a notebook; that’s as far behind the curtain as Gray goes. The process by which gangsta rap is created is never explored. “You are witnessing history,” a character exclaims at one point, but Gray doesn’t explain why. Nor do we ever really understand what it is that connects manager Jerry Heller (Paul Giamatti), a one-time promoter of mainstream rock acts like REO Speedwagon and Journey, to Eazy-E (Jason Mitchell), the hustling heart of NWA.

In one scene, we see Easy-E and his wife in their palatial mansion. On a huge television in on the corner, a ghostly loop of the Rodney King beatings play out a news channel. Any sense of irony is lost.