How does a questing psychedelic guitarist transform themselves into a classic singer-songwriter? By compromising, in many cases. Steve Gunn, however, is managing the transition with uncanny elegance. Maybe you've already heard the latest album from this languidly prolific Brooklyn guitarist: it's called "Way Out Weather", and it's just out on the Paradise Of Bachelors label. 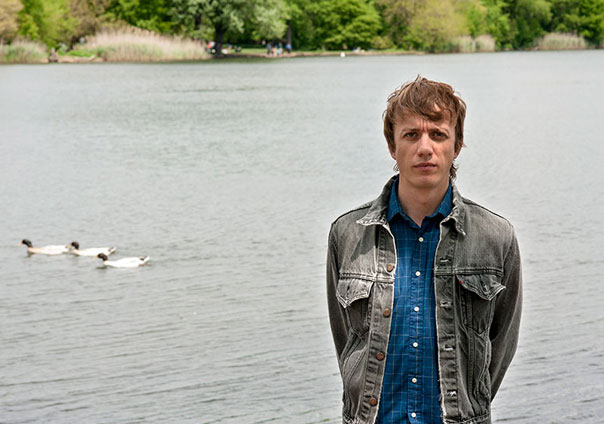 How does a questing psychedelic guitarist transform themselves into a classic singer-songwriter? By compromising, in many cases. Steve Gunn, however, is managing the transition with uncanny elegance. Maybe you’ve already heard the latest album from this languidly prolific Brooklyn guitarist: it’s called “Way Out Weather”, and it’s just out on the Paradise Of Bachelors label.

Gunn is one of those musicians I’ve written a lot about these past few years, thanks not just to the sheer weight of records he’s made, but to their striking consistency. Consistency in terms of quality, I should stress, rather than of homogeneous sound: Gunn has been scrupulous in plotting a zigzagging course between roots music and the avant-garde, visiting all kinds of intersections along the way.

That journey has taken in solo acoustic records like “Boerum Palace”, Higgins/Bull-style duets with the drummer John Truczynski, a JJ Cale homage with Hiss Golden Messenger (Golden Gunn), a psychedelic jam band with the Irish guitarist Cian Nugent (Desert Heat), a stint in Kurt Vile’s Violators and, most recently, a collaboration with the British guitarist Mike Cooper, a kindred spirit in his investigations of how he can stretch, splinter and transcend folk guitar playing.

Beginning with last year’s “Time Off”, however, Gunn has channelled at least part of his energies into becoming a more orthodox singer-songwriter, with one foot in the vicinity of the rock world. “Way Out Weather” is a beautifully-constructed set of songs, and one in which Gunn has worked out exactly how to fit his six-string explorations into more orderly environs. Take the opening title track, and how Gunn’s engagingly husky voice discreetly leaves space for the woozy, cycling guitar dynamic – a narrative of eco-fear played out with a sun-damaged languor. As Gunn embarks on a kind of ambulatory but unfussy solo, his time with Kurt Vile seems to have had a subtle impact on his playing (reports are circulating, incidentally, of a Vile/Gunn joint LP being in the works).

In contrast with its predecessor, “Way Out Weather” is full of inventive new tangents, so that “Atmosphere”, for instance, plants Gunn’s introverted work into a kind of hazy ambient setting. “Milly’s Garden”, meanwhile, is an elegant, muted boogie that calls to mind Little Feat, or even a surreally undemonstrative Stones. For a guitarist who made his name as a solo performer, it’s also a measure of how well Gunn’s music now fits into a band environment; fuller, more expansive, for sure, but still retaining the critical intimacy, the understated virtuosity that is at the heart of his work.

One of those players involved on “Way Out Weather”, and indeed in Gunn’s current live band, is Nathan Bowles, who’s long moved in a similar shadowy interzone to that of Gunn. Bowles’ CV includes being a core member of the rustic Piedmont ensemble, The Black Twig Pickers, and their more cosmic twin band, Pelt, as well as shifts with, again, Hiss Golden Messenger.

In Gunn’s band, Bowles mans the drumkit, but on many of these jobs he’s focused on playing banjo, and it’s this instrument that dominates his tremendous second solo album, Nansemond, also on Paradise Of Bachelors. If 2012’s A Bottle, A Buckeye played it relatively straight as banjo folk, Bowles’ second solo set is a rich realisation of his complete range. So Nansemond evokes Bowles’ swampy Virginia homeland with nuanced picking, waterlogged drones, rowdy vocals (a first) and an inspired duel with the electric guitar of Tom Carter, from Charalambides on “Chuckatuck”. Best of all, there’s “Sleepy Lake Tire Swing”, a culmination of Bowles’ downhome and transcendent adventures, that captures the same spirit as his mentor, Jack Rose.

Great records both, I think, and a sign that perhaps this music, played by many artists who lurked in the background during the curious acid-folk (or whatever you need to call it) upsurge of a few years back, is now having its moment. These are productive and endlessly busy musicians, but ones who’ve followed a discreet path of experimentation and arrived at more accessible music in their own gracious time. As the emails start arriving in my inbox, pushing hordes of wet-behind-the-ears performers straight into the limelight as putative stars of 2015, it’s a strategy that many bigger labels might do well to follow. Even in today’s fraught climate, a little long-termism might eventually pay dividends…