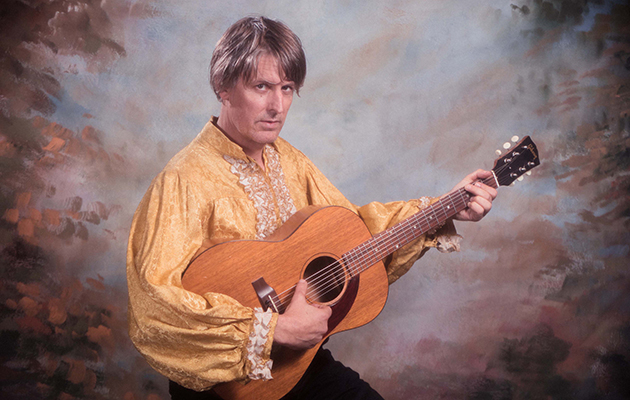 It’s common for artists, especially those with an eye on experimentation, to have unexplored avenues in their work: a less ambitious Beatles, say, could have weaponised the success of “Michelle” in France and the Low Countries with a chanson album; and Black Sabbath’s follow-up to Paranoid, if different drugs had been imbibed, could have been eight tracks of psychedelic space-folk à la “Planet Caravan”.

For Stephen Malkmus, one such abandoned road is signposted by “Kindling For The Master” from 2005’s Face The Truth. A good deal of his third solo LP was recorded on his own in his Portland basement, but “Kindling…” remains the most radical departure; Malkmus’ voice is morphed over a bed of glitchy electro-funk, as spongy synths – their tones as playful and wry as the Californian’s lyrics – spatter against the basement wall.

Since then, Malkmus and the Jicks have doubled down on a more classic, rock-leaning sound, with sludgy grooves, lengthy guitar solos and chiming indie-rock ballads forming the backbones of the excellent Real Emotional Trash (2008), Mirror Traffic (2011) and Wig Out At Jagbags (2014).

Over these traditionalist years, however, there were rumours Malkmus was making a more outré electronic LP. In November 2017, he premiered new material, armed with just a mic and a laptop, at the Portland Institute For Contemporary Art. Then came Sparkle Hard last May, perhaps the most accessible, immaculately produced and guitar-based album of his career. Fantastic, yes, but hardly brave. Yet now the songwriter has mustered up the courage – or, more accurately, convinced his label Matador – to release this long-awaited electronic project, now titled Groove Denied.

Opening with the austere “Belziger Faceplant”, Groove at first seems like a difficult, unwelcoming beast. Sequencers bubble, gleefully out of sync, over a sparse drum machine, before a digitally manipulated Malkmus appears to moan out a single line. Then the white noise kicks in, and the groove cycles around, electronic elements appearing and melting away; the final minute is a collage of grotesque arpeggios and deformed mumbling. Hardly “Shady Lane”, this is Malkmus at his most abstract.

And yet, as it progresses, Groove Denied changes shape, the outlines of its form shifting as each track bursts forth with ever more melody and wit. It’s a gradual change, though: the second track, “A Bit Wilder”, is vaguely industrial electro, reminiscent of Malkmus faves Cabaret Voltaire: “We think you’ve suffered enough to burn/All the accolades that you’ve earned,” he sings in a slightly English cadence. Even more British is “Viktor Borgia”, evoking early Depeche Mode and Kraftwerk’s The Man-Machine. Malkmus here seems to be inhabiting the persona of some jaded Blitz Club doyen: “We walk into the club/Thank the heavens above/There’s a place we can go/Your eyes are like a present, from a peasant/Oh, and I cherish them so.” There’s a sense here that Malkmus is still digging into the British post-punk scene that inspired his early forays into music, but instead of The Fall and Swell Maps, he’s channelling The Human League and the Cabs.

Elsewhere, “Forget The Place” is an oddly beautiful interlude built around a swelling loop of synth and kick drum, with an Auto-Tuned Malkmus hovering above the greyscale soup like the “high plains drifter” he mentions. Soon after, synths explode into ecstatic oscillations; it’s excellent, but unknowable. Sandwiching this track, though, are two songs that telegraph a shift in Groove Denied: “Come Get Me” is infectious, lo-fi rock driven by guitar and Malkmus’ untreated vocals, while the brilliantly titled “Rushing The Acid Frat” is two-and-a-half minutes of wonky garage-rock, and would have fitted perfectly on Pavement’s gonzo Wowee Zowee.

As Groove Denied reaches its final third, it moves even further from its digital, sequenced beginnings; but, placed in this particular frame, these more conventional songs strike harder than they would if heard in the context of a more traditional Jicks record. The ornate, picked “Ocean Of Revenge” is especially strong, a violent tale that recalls the twisted narratives of Real Emotional Trash. Malkmus introduces himself as “a debtor of base human stock” who heads to Mississippi, “to tend the crops for Mr Baker”; but grudges soon erupt into action, as Malkmus’ character recalls: “So I dragged my axe to Baker’s fine house/I gave a knock on his door/I started swinging, I never looked up/’Til Baker was an ocean of revenge…”

The great feint here, then – the joke, perhaps – is that Groove Denied turns out to be less of an experimental detour, and more of a continuation of Malkmus’ stellar stream of work. After all, the closing, bittersweet “Grown Nothing” could have sprung from Sparkle Hard, with Malkmus’ vocals high and clear above piano, stuttering bass and a bossa drum loop. With its melodic, mellow guitar solos and “Major Leagues” feel, it also brings Pavement’s Terror Twilight to mind.

Groove Denied runs the full gamut of Malkmus’ history, though, the most out-there tracks also reminiscent of Pavement’s earliest work, both in the gauzy lo-fi sound and the air of anything-goes weirdness. If the consistent Sparkle Hard felt a little safe, Groove Denied is the flipside: a free-wheeling, oblique and thrilling journey. These  33 minutes are some of Malkmus’ finest work;  one avenue, then, has now been explored and staked out, but remains pleasingly wild.

You can hear a track from Stephen Malkmus’s Groove Denied on the CD that comes free with the current issue of Uncut, in shops now or available to buy online by clicking here.