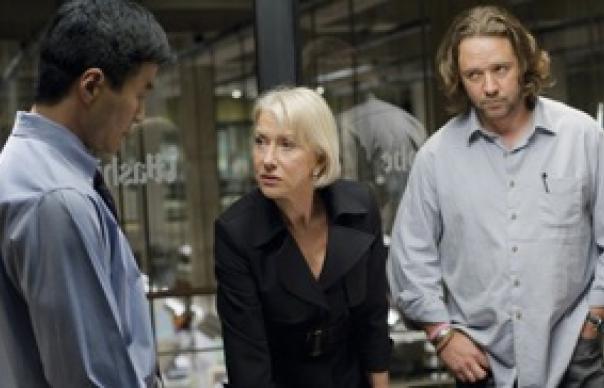 This taut adaptation of the Paul Abbott’s 2003 BBC series may well find itself under patriotic scrutiny in the UK as to whether it “stands up” to the original. Stateside, though, you might assume there will be less focus on that, the screenplay having been honed by Tony Gilroy (Michael Clayton) and Matthew Carnahan (Lions For Lambs) into a brisk conspiracy drama for director Macdonald, making his first film since The Last King Of Scotland.

All concerned aim for an intelligent, exciting, grown-up movie that pays homage to – while updating – the great Seventies standard-bearers of the genre: All The President’s Men, The Parallax View, and so on. Bar a couple of niggling plot points, it’s very successful, gripping from start to finish in the way that Michael Clayton almost but not quite did.

When the assistant/mistress of rising congressman Stephen Collins (Ben Affleck) is murdered, the Washington Globe’s reporters dive into detective mode. Leading the case is old-school tough nut Cal McAffrey, played by a chubby Russell Crowe (John Simm, no less, in the BBC original) with an unruly mane, an unrulier streak, and a rough charm. He’s at first unimpressed by his young colleague and blog queen Della Frye (McAdams), snapping at her: “Get a few facts in the mix next time you decide to upchuck online.” But mutual respect grows between the pair.

McAffrey’s ace card is that he was Collins’ room-mate at college. Collins confides in him, up to a point, though as McAffrey once had an affair with his wife (Wright Penn), his reticence to share completely is credible. While cans of worms are opened and plots thicken, stirred by excellent cameos from the likes of Jeff Daniels and Jason Bateman, the reporters’ editor (Helen Mirren) barks at them to up the pace, jeopardising their progress.

It’s the attention to detail that makes State Of Play work so well. The office politics on both sides, newspaper and congress, are deeply convoluted. As corporate crime is uncovered and mercenary soldiers enter the fray, McAffrey’s desire to get to the bottom of things threatens to compromise his ethics. He’s convinced a witness will talk, “because he’s scared”. “How do you know?” “Because I’ll scare him.”

Macdonald’s skill is to draw the suspense out here. But there’s humour too, as when a jittery Collins, his face splashed across the media, knocks bashfully on McAffrey’s door. “Ah”, he smirks. “You’ve come for that Roxy Music CD you lent me..?”