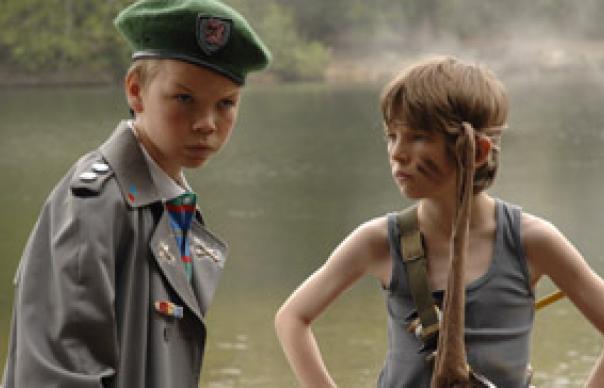 SYNOPSIS
Raised in the Plymouth Brethren, ten year-old Will has never seen television, heard pop music, or seen a movie. His live changes when he falls under the influence of Carter, the school misfit, who runs a sideline in pirate videos, and is using his video camera to make a film of his own. When Will sees Rambo, his imagination takes flight.


Thanks to cheap television shows in which half-celebrities pretend to reminisce about the recent past, the 1980s have already been mythologised as a time of big hair and big phones, Loadsamoney and Wham! Shane Meadows offered a corrective to some of that last year with This Is England, which offered a more measured version of the Thatcher decade: it wasn’t all red Porsches in the carport.

Son Of Rambow takes a different approach. True, there is a big of visual comedy to do with the clothes of the time: the backcombed bouffants and jumble sale flamboyance of the Thompson Twins are in evidence, and there is a sports car and a brick-sized mobile phone. But, mostly, Garth Jennings’ film has the timeless feel of childhood memories. It’s not about the fashion. Instead, it celebrates the fearlessness of youth, and the refreshingly un-cynical notion that today, or any day, could be the best day of your life.

Jennings and producer Nick Goldsmith made their cinematic debut with The Hitchhikers’ Guide To The Galaxy, and their production company Hammer & Tongs made the music videos for Blur’s “Coffee And TV” and REM’s “Imitation Of Life” (see also the dancing robots for Beck’s “Hell Yes”). But Son of Rambow is a personal project, begun before Hitchhiker, drawing on Jennings’ over-imaginative childhood on the edge of Epping forest.

It focuses on the friendship between Will (Bill Milner), a spindly 10 year-old who has been raised in the Plymouth Brethren, and Carter (Will Poulter), a streetwise kid who runs a sideline in pirate videos from the basement of the local care home. Will’s Brethren upbringing means that he has never watched television, and he lives instead in his imagination, drawing flickbooks of plane crashes, and covering the pages of Genesis in his Bible with doodles of malevolent serpents. He is also mourning the death of his father in a lawnmower incident, and is looked after by his mother Mary (Jessica Stevenson) and Joshua (Neil Dudgeon), a David Cameron-like visitor from the Brethren. Carter, meanwhile, is barely supervised by his spivvy older brother, their parents having absconded abroad.

Will and Carter meet in the school corridor, and Carter quickly bullies Will into acting in the film he is making for the young filmmakers’ competition on the BBC’s Screen Test. His first scene is a William Burroughs’ affair: Carter shoots a piggy bank from the top of his head with a crossbow.
While hiding from Carter’s brother, Will catches sight of a pirate video of Rambo: First Blood. It is the first film he has ever seen, and the effect is immediate. He runs home through the wheat fields, past the cooling towers and, with his imagination in overdrive, is confronted by an evil-looking scarecrow. “Who are you?” the scarecrow asks? “I am the son of Rambo,” the boy replies, “what have you done with my dad?” As his friendship with Carter deepens, their ambitions grow, and pretty soon Will is being catapulted, hosed, and dropped from trees into rivers, even though he can’t swim.

It is a sweetly-observed tale of two outsiders, bound together by their inability to fit in. They are joined by Didier Revol (Jules Sitruk) a hilarious Pied Piper-ish French exchange student who fancies himself as the coolest boy in the world, and is prone to saying things like “I am trapped in a world of boredom”.

Nostalgia-lovers will be comforted by a sequence inside a fantasy Sixth Year common room which is somewhere between Scout camp and Studio 54 – all rollerskates, dancing to Depeche Mode, and cocktails of Space Dust and Coke – and it is alarming how evocative the jingle for the Radio 1 Top 40 can be. That’s all good, but Jennings’ film has an innocence which transcends wistful reminiscence.
It also features Eric Sykes as a senile Rambo, which is a bonus worth savouring.

UNCUT: Was there an autobiographical element to the story?
JENNINGS: Before I had any real plot, I had all these notes that I’d made on my own childhood, based around the fact that I used to make these ludicrous home movies, inspired by myself and my friends, who were 11. We saw a pirate copy of First Blood, and it completely baked our noodles. And because we lived on the edge of Epping Forest we were always playing in it anyway, and then here’s this guy who can sew up his arm and make traps. We just thought it was brilliant. Of course the whole idea of it being a Vietnam vet was just completely lost on us. We just saw action and muscles. And my next door neighbours were Plymouth Brethren. It’s clearly a heightened representation of childhood, but all the little details are based on real people or real characters or real events.

Was Screen Test important to your young filmmaking career?
I watched that show religiously. It also had the best signature tune of any kids show. I used to love it. I loved watching clips from films. And the Young Filmmakers’ competition was great – it was like Tony Hart’s gallery [on Vision On], I always aspired to enter something, but never quite got round to it. My favourite entry was this brilliant piece of animation, from this 15 year-old kid from Chelmsford. I Googled him, and it turns out his name’s Jan Pinkava. He went on to be the big head honcho at Pixar, and he wrote Ratatouille. So it was quite nice to put him in.

How did you approach the copyright of Rambo? Presumably that’s a brand name.
Rather naively, like the children in the film, I though, it’ll be fine: we’ll just call it Son Of Rambow, and it’s clearly not a film about the character Rambo’s real son coming back to avenge his death or anything. We had to spend a long time sitting down with everybody to get a situation where we’d all be happy. But it’s come out great. Everybody’s happy. And I got to keep the title.

Was the W always on the end?
Yes. Even before we finished Hitchhikers’ Guide To The Galaxy our script had a W on it. Because the kid got it wrong – he spelled it phonetically. Also we thought it was quite good manners. It was a nod towards the people who own this thing saying we’re not trying to rip you off. It’s an homage rather than a cynical piss-take.

as Sylvester Stallone seen it?
Yes, and I got this message saying he loved it. He had a question as to “Who was that guy who played me in the dream sequence?” I did want to reply: “Well I did try and get you for that, but you weren’t available.’..”

Was Bill Forsyth an influence? Did you like Gregory’s Girl?
That’s an amazing film. I had a lot of films buzzing around. Harold And Maude was actually the one that Nick [producer, Nick Goldsmith] and I adored the most, even though that’s not about children. It was that odd coupling; very odd characters that became very endearing, strange relationships that become lovely relationships. And we loved Stand By Me. I think that was a great coming-of-age film, because it didn’t hide from the fact that children do smoke the odd cigarette unconvincingly. They do swear a bit. They will do things like run in front of a train. My Life As a Dog was a great movie as well.

Harold and Maude has a real sense of devotion between the characters.
That was a big eye opener for Nick and I. It’s not the same kind of relationship. But it’s played with the same level of heart, and it’s totally personal. It didn’t feel like you were watching a generic movie. That’s it – not to be afraid to put your heart into it, but at the same time try to find a new way of telling a story about friendship. God, I sound pretentious! Can you strike all that and just say: ‘The director didn’t know what the fuck he was talking about’?