The Mod scamps best work, finally given due respect... 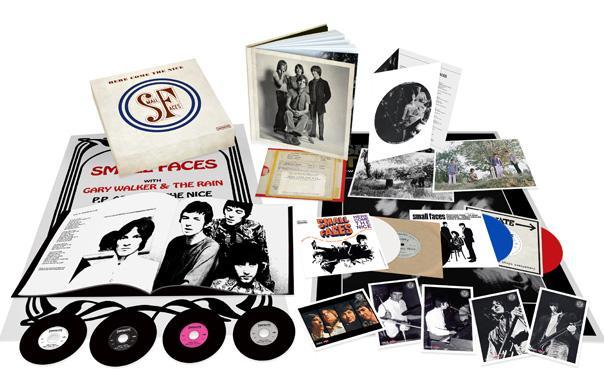 The Mod scamps best work, finally given due respect…

In this boxset’s 72-page book, where tributes come from admirers as diverse as David Bowie and Paul Stanley, someone says of the Small Faces: “They deserve to be placed right up amongst their contemporaries the Stones and The Who.” The implication hangs in the air: deserve to be but aren’t. What happened? Was an injustice done?

Impeccably dressed Mods with the talent to excel in R’n’B and psychedelia, the Small Faces had the songs and the singer to take on the world. But their master tapes were chucked in skips and their classic songs thrown away on cheap compilations. Years in the planning, Here Come The Nice has proved something of an archaeological and legal ordeal for its compilers, yet they persevered, as if doing right by McLagan and Jones – and by the memories of Marriott and Lane – has become the music industry’s last remaining moral imperative.

Goodwill only gets you so far. The rest depends on how special you were in the first place. Here Come The Nice opens with a 20-track round-up of singles and EPs. Every Small Faces collector in captivity will already own them in 18 different sleeves, but that may not be the point. This disc is about explaining who the Small Faces were and what they did.

A magnificent 54-minute sequence of hit singles, Hammond organs and high-water marks of ’60s pop, it establishes the context, the ground rules. We’re transported to a golden age and these four young men do indeed deserve to be placed right up amongst their contemporaries. Some of the B-sides – “I Feel Much Better”, “Donkey Rides, A Penny A Glass” – are as magical as other groups’ A-sides.

Boxsets have been dedicated to the Small Faces before, but this feels more intimate. A 4CD set (with some vinyl) of their 1967-8 sessions for Immediate, Here Come The Nice features two discs of unreleased material assembled from sessions at Olympic, IBC and Trident studios. Push open the door and we’re in, eavesdropping as they decide between a Marriott or a Lane vocal on “Green Circles” and attempt to nail an intro for “Tin Soldier” (working title: “Anything”). As the discs unfold, they work up arrangements of “I Can’t Make It” (“Wit Art Yer”), “Wide Eyed Girl On The Wall”, “Wham Bam Thank You Mam” and others. By the end of CD3 they’re absorbed in sessions for an LP that will never come out, floating into an uncertain future with Marriott’s tender “Jenny’s Song” (“The Autumn Stone”).

Mindful of recent deluxe editions, Here Come The Nice avoids duplicating any album in full, though that wonderful first disc includes seven tracks from the 1967 Immediate LP (Small Faces) and five from Ogdens’ Nut Gone Flake (1968). Rather than aim to be an anthology of the whole career, it’s a dipping-into boxset for the fan who wants to get closer – as close as the Pet Sounds and Smile boxsets allowed Beach Boys fans to get to Brian Wilson. Aside from their glimpses of the Small Faces in their workplace, the second and third discs are a little window on their personalities. Marriott, small as life and twice as cheerful, is a constant energy in the room, putting on accents, calling everyone “man”, radiating warmth. Lane, seated here, and McLagan, over there, follow his direction. They’re a good-natured bunch. When a take breaks down, Jones quickly cues them in again. There’s less larking about than one might presume. Only on a session for “Mad John”, from Ogdens’ Nut Gone Flake, does Marriott sound terribly stoned.

The fourth disc is an assortment of alternate mixes, rarities and live performances. It will delight anyone who wishes to hear Lane sing “Green Circles” in Italian – and many do – and it also boasts “(If You Think You’re) Groovy”, recorded with PP Arnold. But the live cuts are scarred by the teenage screamers who besieged the band, making it difficult for them to assert themselves as a serious group.

In our modern age, of course, the currency of validity for serious groups has become the stylish, artfully constructed boxset. And so finally the Small Faces got there. Here Come The Nice really does sound lovely.
David Cavanagh

Q&A
Ian McLagan
You and Kenney have been involved in supervising this boxset. Is it everything you hoped it would be?
It’s a beautiful job. Rob Caiger [producer] has worked very hard on it and I’m absolutely thrilled. I haven’t read all of the book yet, because it’s so big, but I’ve played some of the singles and listened to one of the CDs, and it all sounds so good. I’m looking forward to really getting into it.

Listening to the tracking sessions, I was expecting to hear a fair amount of stoned giggling. But you sound like a band with a strong work ethic.
Well, see, there was no time off. Time off was [spent] listening to records or playing. When we got to Olympic we didn’t waste time. Glyn Johns may offer a different opinion, haha. I remember he used to go home at 12. “That’s it. I’m off. You can stay here as long as you like.” And we did – ’til three or four am. We were just blessed to be in the studio. This box covers the second half of our career, when we learned to use the studio more creatively.

What’s it like hearing Steve and Ronnie’s voices on those sessions?
It’s like they’re still here. It brings a tear to my eye. As I look through the photos of us at Olympic, I can smell that place. I can see us, smoking cigarettes, passing a joint, having fun, getting on with it.

The book has tributes from some surprising fans. Paul Stanley of Kiss, Chad Smith of the Red Hot Chili Peppers…
I worked with Chad earlier this year. I’ve also met Flea. Flea could have been in the Small Faces. He’s the right height.
INTERVIEW: DAVID CAVANAGH