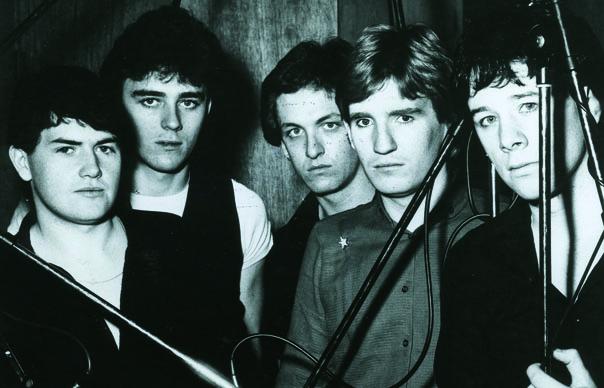 There be gold in them stadium rock foothills. Before the superannuated MTV anthems, the spot lit spouses, the charity mega gigs, Simple Minds were the very opposite of boring. They made dark, dazzling, unconventional records whose influence would later echo through the music of U2, Primal Scream, Manic Street Preachers, The Horrors and Blur (speed up the carnival rhythms of “Life In A Day” and “Girls And Boys” drifts into view).

A new box-set assiduously tracks this alternative narrative. It contains remastered versions of the band’s first five albums (though it lacks, sadly, any unreleased treasure) and begins with the callow charm of John Leckie-produced debut Life In A Day (1979). Although they’ve outgrown their early incarnation as Johnny & The Self Abusers, the spirited music remains highly derivative, a post-punk melange of Cockney Rebel, The Doors, Roxy Music, Bowie, Magazine and Neu!. Dodgy eight-minute dirge “Pleasantly Disturbed” is prog-rock-meets-the-Velvets.

Significant progress is made on Real To Real Cacophony (1979). The work of a band in rapid transition, it features an ambitious, experimental concatenation of styles. “Naked Eye” and “Carnival” are nightmare vaudevilles, the aural equivalent of a hall of mirrors. “Veldt” is incipient world music, a post-colonial dream fever nodding to Peter Gabriel and Bowie’s Lodger. Elsewhere, the growing rhythmic interplay between bassist Derek Forbes and drummer Brian McGhee edges songs onto the dancefloor. “Premonition” is hard, futuristic Euro-funk; “Changeling” metallic post-punk overlaid with a sawing synth groove. Both are wonderful.

On Empires And Dance (1980), Leckie’s final album with the band, they follow this path into the heart of disco-rock darkness. Jim Kerr’s agitated travelogue observes Old Europe decadence, pre-war “drug cabarets” and contemporary New European turmoil: Baader-Meinhof, bombs in Rome and Paris. It’s both disturbing and bleakly romantic. On the almost unbearably taut “Thirty Frames A Second” existential panic and the lure of the glitterball unite in perfect lockstep. “I Travel” is whirling dance-rock and the relentless “Celebrate” is a chain-gang electro-blues, a proto-“Personal Jesus”. Slow and monolithic, “Today I Died Again” and “This Fear Of Gods” are suffused with dread. You can certainly see why Empires And Dance might have made a profound impression on the Manic Street Preachers, whose The Holy Bible drew on everything from its cover art to its unsettling themes.

The mood changes again on Sons And Fascination/Sister Feeling’s Call (1981). Recording with Gong-master Steve Hillage, the original intention was to make a double album and, although the two records were eventually released simultaneously but apart, they share the same thick, sinister, bass-heavy atmosphere. Smoky tribal rhythms and North African and Middle Eastern melodies snake through “League Of Nations”, “Boys From Brazil” and the title track, while Kerr’s clipped bark is now pitched so low he almost swallows his own words, which are generally disquieting: “Not just the boy who’s crying wolf now / Somebody’s screaming up at our door”.

Yet at the same time something less ominous is emerging from the shadows, evident in almost-hits “Love Song” and “The American”, which expires in Charlie Burchill’s thrilling squall of wah-wah. The ability to shackle artfully alienated dance-rock to a warm, hummable chorus point towards New Gold Dream, which appeared in 1982 like a shimmering heat haze, lit up from within with an ambient, golden pop glow. Hits “Promised You A Miracle” and “Glittering Prize” may be persuasive, but it’s “Big Sleep” and Herbie Hancock’s sublime keyboard solo on the mesmerising “Hunter And The Hunted” which attain true transcendence.

Sultry assassin’s song “King Is White And In The Crowd” reprises the old menace, but the dawning of a new age in which the cover of Smash Hits was as coveted as that of NME brought these perennial outsiders in from the cold. Simple Minds rapidly became a very different band, sucked into the rock slipstream. Anyone who knows only that part of the story is urged to immerse themselves in these albums which, though far from flawless, are fascinating, endlessly inventive and somewhat magical. Not only have they have never sounded better, they’ve rarely seemed so in tune with the times.
Graeme Thomson

Q&A
Jim Kerr
Why do 5 x 5 now?
Over the past few tours we’ve been delving into more obscure early songs and finding that some of them had a contemporary vibe. They have a new context. A wealth of newer bands seem to be drawing on, not Simple Minds in particular, but that period in general.

Did you want to set the record straight in some way?
Nobody owes us anything, but the Simple Minds story has been too condensed. After Live Aid and “Don’t You Forget About Me” there hasn’t been quite the credit for those first few records. I think they contain some really special music. I can hear the flaws but there’s something about the spirit and imagination in them that feels good. They draw from such a wide range of influences. We’d go from really obscure krautrock to Chic and Sister Sledge to Beefheart to Bowie and Eno, but the spirit of it was always Simple Minds. There was no identity loss.

Do you have a favourite?
Empires And Dance, a travelogue with spiky dance music. We were young men travelling through classical Europe, reading Camus, and it was all feeding the machine.
INTERVIEW: GRAEME THOMSON