Confident confirmation that “O’ Be Joyful” was no fluke... 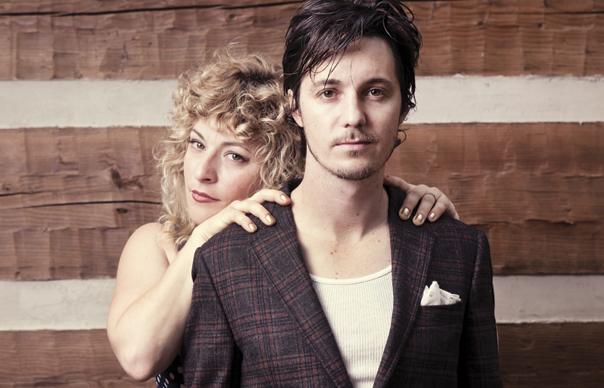 Confident confirmation that “O’ Be Joyful” was no fluke…

Confronted with the bewildering heritage of country music, there’s always a temptation to pretend that there was a cut-off point, by which everything worth singing had been sung, beyond which little worth being influenced by was produced. The artwork of Swimmin’ Time places Shovels & Rope’s end times precisely. The lyric sheet is wrapped in sepia stills of flooded American cities and towns in Shovels & Rope’s native Carolinas, one captioned April 1963.

The inner sleeve shows Shovels & Rope’s Michael Trent and Cary Ann Hearst adrift in a rowboat, again in black and white, looking like refugees from some mythical shipwreck, soon to be immortalised in a seventy-verse ballad by Henry Clay Work – as well as from any trappings of modernity. Another datestamp appears in the closing track, “Thresher”, a bleak, stately hymn to the US Navy submarine of the same name, which sank with all aboard in what was clearly the bad month of April 1963 (and was previously commemorated in song by Phil Ochs).

Shovels & Rope, it seems safe to assume, recorded Swimmin’ Time utterly unconcerned by the prospect of suggestions that the album is something of a period piece. The only question, then, is whether or not Swimmin’ Time – the apostrophe, we may be sure, is intended as another harbinger of down-home authenticity – is a convincing and beguiling period piece. The answer is – a qualified – yes. Shovels & Rope largely manage that rare and difficult balancing feat of honouring the heritage to which they’ve subscribed without becoming piously curatorial. At its best, Swimmin’ Time is a warm, giddy, rumbustious hoot, whose relative disdain for the last half century or so sounds much more like correct aesthetic judgement than any fear of the present.

It all gets very Old Testament as early as the opening track. “The Devil Is All Around” presents initially as a solemn hymn over a portentous organ drone – which, deliberately or otherwise, cannot but evoke the beginning of The Louvin Brothers’ 1958 gothic classic Satan Is Real. Shovels & Rope, however, swiftly shift up a couple of gears from the Louvins’ abject pleading into something strangely celebratory, an incongruous frolic bequeathing an image of subjection that might have fallen from the pen of “Surfer Rosa”-era Black Francis (“When the Devil is all around/And got you crawling on the ground/On your hands and your knees with an apple in your mouth”).

This early statement that Shovels & Rope see little need to budge from the template established on last year’s splendid breakthrough album “O’ Be Joyful”. Swimmin’ Time is largely comprised of similar stomping country gospel, from the insistent “Bridge On Fire”, which glories in that Gram/Emmylou trick of turning up the female harmony just a little louder than the male lead, to the bitterly hilarious devotional duet “Pinned”, to the finger-snapping, singalong silliness of “Fish Assassin”, which recalls White Stripes at their more whimsical.

The signature combination of upbeat music and somewhat gruesome lyrical themes works so well for Shovels & Rope that a few leaks spring when they commit themselves to a dive to the depths. The Louisiana funeral dirge of “Ohio” doesn’t quite come off – a shame, as the couplet “When I lined up to talk to God/I kinda didn’t like the looks of the firing squad” deserved better. The oblique murder ballad “Evil” has commendable ambitions of resembling Tom Waits backed by Sixteen Horsepower, but would have benefited from the counter-intuitive light touch that Shovels & Rope bring so deftly to bear on similarly themed material elsewhere.

At their best, though, Shovels & Rope are a joy, a treasurable combination of DIY musical virtuosity and a rare gift for wry storytelling. When someone starts a song – and they do – with the lines “Mary Ann was a waitress at the circus/Dan was a writer for the Delaware Locale Observer”, you’d be a fool not to be interested in what happens next.
ANDREW MUELLER

Q&A
SHOVELS & ROPE
Give or take the horns on a few tracks, how important is it to you to keep the music down to what the two of you can play?
“Neither of us are virtuosos at any of the instruments we play. When we record it’s more about the personality than technique. In the studio we give ourselves the freedom to include whatever sound we hear that suits the song even if we have to bring someone in to do something we can’t (like play brass). In a live setting we pretty much have to depend on what we can play to get the job done.”

How difficult is to separate the creative relationship from the personal one?
“It’s all we’ve known so it’s really not a big deal for us. We like each other and communicate well. Plenty of married folks run mom-and-pop businesses. Ours just happens to be a little more fun.”

It’s hard to miss a certain aquatic motif recurring throughout “Swimmin’ Time” – was that deliberate?
“It became clear that there were variations of the underlying theme as we assembled the song lists for possible record cuts. We just surrendered to the damn thing. ‘Oh, look dear! They are mostly all about water somehow! Well, that will do I suppose. How ‘bout we call it ‘Swimmin’ Time’?!”
INTERVIEW: ANDREW MUELLER