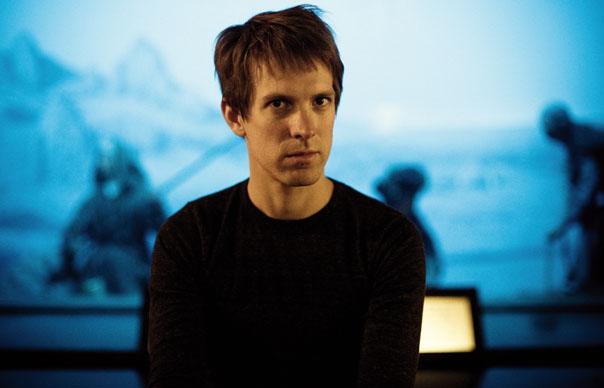 Since Jonathan Meiburg and Will Sheff splintered off from Okkervil River in 2001, the reason was ostensibly to create a backwater in which they could explore for quieter material. With Sheff now departed, Shearwater – based in Austin, Texas – has coalesced around the songwriting of Meiburg alone, and with a fluid line-up he has completed a string of albums in the interim, of which Animal Joy is the eighth. Over the past few releases, including Rook and The Golden Archipelago he has taken the group – now a trio including ex-wife Kimberly Burke (bass) and Thor Harris (drums), into rockier waters. Last year’s live improvised joint, Shearwater Is Enron, introduced Andy Stack of Wye Oak and various members of tour buddies Hospital Ships.

If Animal Joy were a movie, its cinematography would resemble the bleak white skies of Winter’s Bone, or the muddy waters of River’s Edge – it emanates from the last remaining rural corners of America which are still, nevertheless, never all that far away from a factory chimney or outlet mall. Meiburg, a renowned twitcher with a Geography MA, drops images from the natural world all over his lyrics, from the “watching the flood stage rise” of “Breaking The Yearlings” to the “You were the flashing wings of the swallow, you were the light in a lion’s eye” of “You As You Were”. Musically, I’m continually put in mind of the kind of sincere 1980s alternative groups that you often heard on the radio but who never broke the charts – The Icicle Works, Let’s Active, The Wild Swans. Meiburg’s troubled tenor is abetted by sinewy arrangements full of the disquiet of that decade, as on “Breaking The Yearlings”, with its taut guitars reminiscent of early Pixies, or the malevolent presence that hovers over “Dread Sovereign”. “Pushing The River”, a disgruntled two-step that ends in a searing guitar feedback whine that burrows deep inside your sinuses.

But I’m betting my last plaid shirt that Meiburg and co have been caning Talk Talk tapes in the tour van, because that’s the group that looms largest over Animal Joy. “Insolence”, the album highlight, lurches and soughs like a Spirit Of Eden outtake recorded in an underground cistern. Burke’s Danny Thompson-like contrabass is mixed to the fore, while Harris bounces brushes on a hollow snare like a beetle trapped in a matchbox, leaving wide open lacunas for Meiburg to slam down great plunging petulant piano chords. “Sometimes I think of welcoming what you are frightened of”, he mutters, before the chorus washes across it like a flash flood. “Open Your Houses” would have sat comfortably on The Colour Of Spring (as would the title of track ten, “Believing Makes It Easy”), with Meiburg paying homage to Mark Hollis’s dying-swan vocal timbre. Harp (Elaine Barber) and clarinet (Sam Lipman) beautifully ornament “Run The Banner Down”, where Meiburg waxes melancholic about the disconnect between the moment-to-moment beauty of living in America and the nation’s predatory, warlike outward face. In this refined company, in which Shearwater “Immaculate”, a jittery new wave thrash – perhaps an answer to the fans who keep worrying the Shearwater don’t rock out enough – feels misplaced.

Like Bon Iver’s last album, Animal Joy is the sound of Americana meshing its cogs with the machinery of the world outside its grimed window. “Star Of The Age”, the closing track, achieves the simultaneous effect of cynicism (for the flags and heraldry of nationhood) and hope. “Trade the darkness of your mind for the star of the age”: it sounds a clause that dropped off the manuscript of the Constitution; some lost jotting clipped from Benjamin Franklin’s ledgers. But the way Meiburg sings it, you believe such sentiments can unclog rivers and make them flow clean again.
Rob Young