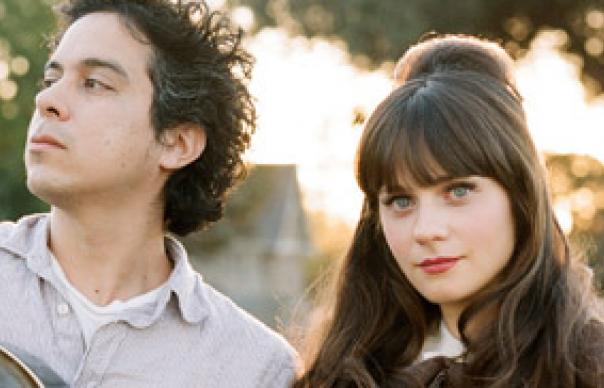 Way back when in the twentieth century, the deadpan wit, gamine grace and knock-out voice of Zooey Deschanel might have been tailor-made for screwball musical comedies. You can picture her as a peer of Irene Dunne, Doris Day or even the young Judy Garland. These days, with such things out of fashion, she’s craftily kept alive the tradition of the actor-singer – maintaining a parallel career as one-half of cabaret vamps If The All Stars Were Pretty Babies, but also sneaking songs, a little like Christopher Walken will with his terrific dancing, into the most unlikely movies.

You could compile a terrific album of these moments: swoonily crooning “Baby It’s Cold Outside” in the shower scene from Elf; belting out “Play That Funky Music, White Boy” in The New Guy; leading a class of schoolkids through Steve Earle’s “Someday” in Bridge to Terabithia; swinging through “Hello Dolly” beneath the Brooklyn Bridge in Raving; performing her own composition, “Bittersuite” in “Winter Passing”, and, most recently, recording a version of Richard and Linda Thompson’s “When I Get To The Border” for the soundtrack to forthcoming indie The Go-Getter.

Recording the last of these she was introduced to Portland singer-songwriter M. Ward, and the partnership proved so enjoyable, Zooey (and it’s Zooey with an “oh” not Zooey with an “ooh”) opened up the stash of self-composed songs she’d been stockpiling and She & Him was born.

In the last few years Ward has become the go-to-guy for indie country/folk pop, working with Beth Orton, Neko Case and, notably, Jenny Lewis, on her solo debut Rabbit-Fur Coat – a record that is a kind of spiritual sibling to Volume One. In many ways, Lewis could be Deschanel’s alter ego – another LA showbiz kid, albeit one who ditched acting for singing around the time Zooey got her big break as the sassy sister in Almost Famous. Both share a taste for the classics and standards of LA AM radio – the airwaves where Peggy Lee torch meets Karen Carpenter ennui, all mixed up with the grand, soft pop of Spector, the Zombies, Laura Nyro and Linda Rondstadt.

Volume One starts out as assured as its title. The opening trio of“Sentimental Heart”, “Why Do You Let Me Stay Here” and “This Is Not A Test” are bright, spry and wry acoustic pop, filigreed with Ward’s subtle guitar figures, in the classicist pop spirit of prime Ron Sexsmith. But Deschanel really comes into her own on the ballads: the Everlyish country of “Change Is Hard”, the torch-song tenderness of “Take It Back”, and especially “Got Me” – the kind of song you could imagine Patsy Cline relishing.

Where the album suffers, however – especially in comparison to the Jenny Lewis record – is the absence of any real lyrical verve or personality. Maybe it’s just that actors are more comfortable with other people’s words, but the second half of the album fizzles out a little with three covers – a nice acoustic take on Smokey Robinson’s “You Really Got A Hold On Me”, “Swing Low Sweet Chariot” (a home recording with so much hiss it might have been sung in that shower from Elf), and a breezy swing through the Beatles’ “I Should Have Known Better”. This last is clearly a song they both love, but it’s an insubstantial little thing, and too much of Volume One seems to exist in that early Fabs teen romance world of holding hands and heartache – particularly on the jitterbugging pastiche of “I Was Made For You”.

In Hollywood terms you might describe Volume One as a “meet-cute” – the quirkily engaging establishing scene in a screwball comedy. If there’s to be a Volume Two, you hope it might build on the strengths of the two characters – Deschanel’s rich, dramatic voice, and, maybe, Ward’s classic songwriterly sensibilities – and deepen the relationship between them.


UNCUT Q & A With Zooey Deschanel:

How come it took you so long to get round to making an album?
Zooey Deschanel: Because I have another pretty time consuming job, and I was very shy about the songs that I had written. I needed to find a great collaborator who could help me open up in this way that was so scary to me. I found that person in matt who not only produced the record but got me out of hiding!

Were you familiar with Matt’s work before you met him?
ZD: I was a huge fan of Matt’s work. I think he is our generation’s answer to Bob Dylan. I can’t believe how fortunate I am to know him and work with him. When we first worked together I was so jazzed about the relaxed, improvisational atmosphere he created in the studio. Everything that came out seemed more effortless and organic than everywhere else in the world. He has the music producer’s version of the gardener’s green thumb. He’s got the magic touch with the records.

Would you say you were a prodigy of the mouth trumpet?
ZD: Definitely not. I had never even tried to do that until the day and I said, “I think this needs a trumpet like, you know,” and I did my best mouth trumpet and Matt said, “we should record that!” And so we did. Now I guess I am a mouth trumpet player. Lickity split.