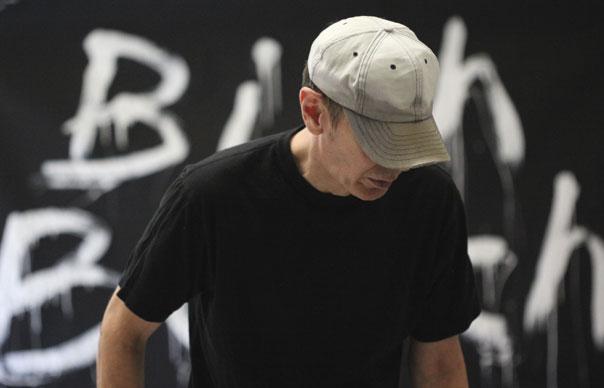 Scott Walker famously never listens to his own records once they are completed; and at times during Bish Bosch – particularly when adrift amid the testing 21 minutes of “SDSS 1416+13B (Zercon, A Flagpole Sitter)”, a song every bit as perplexing as its title – I’m with Scott on this one, to be honest. Rarely, I’ll warrant, have such formidable battalions of sonic weaponry – including eight different guitar tracks, rams horns and the tubax, a bizarre hybrid of tuba and bass saxophone, of which only two exist in this country – been marshalled in the service of music destined to be played so infrequently.

But this, of course, is all in keeping with the Scott Walker mystique, involving an aura of exacting asceticism combined with prickly, uneasy, often alarming music and lyrics that resemble the most cripplingly cryptic of crosswords. Some tracks on Bish Bosch come with copious footnotes attached, like an Ezra Pound or TS Eliot poem, though mercifully Walker at least sticks to the English alphabet here. And throughout, there’s an evident delight in lexicographical obscurity that echoes James Joyce or Will Self: no bad thing in itself, though when allied to the sometimes impermeable, abstract constructions, the results can be frustratingly opaque. In an era when every two-bit micro-celebrity begs for one’s attention in ever more demeaning and salacious ways, Scott Walker just seems to shrug his shoulders, turn his back and walk away, unconcerned whether anyone actually bothers listening or not. Which does tend to tweak the interest of those brave souls who like a challenge.

It’s tempting, then, to search for some unifying principle or theme linking the album’s nine lengthy tracks together; and none seems more appropriate than the Shakespearian coinage “What a piece of work is a man”, Hamlet’s ironical assessment of humanity, and its linked apprehension of the surrounding world as “a foul and pestilent congregation of vapours”. Bish Bosch is an album suffused with corporeal disgust and philosophical disquiet, in which mankind, the pinnacle of creation, is reduced to little more than a bag of bones and soft tissue, inhabitant of a wasteland realm long abandoned by its creator. Yes, it’s that much fun.

Actually, it’s more fun than you might expect, Walker’s characteristic seriousness tempered occasionally with a gallows humour and bawdy ribaldry of which Shakespeare’s audience would have approved. The complex “SDSS 1416+13B (Zercon, A Flagpole Sitter)” is studded with a series of gratuitous insults, punctuated by passages of silence in which the contempt hangs like a fart: “Look, don’t go to a mind reader, go to a palmist; I know you’ve got a palm”; “Does your face hurt? Cuz it’s killing me”. And the bodily disgust so elegantly expressed in “Epizootics!” is suddenly interrupted by “Take that accidentally in the bollocks for a start”, a rough-house line all the more hilarious for being delivered in Walker’s aloof, academic tones.

The album title makes similarly broad-humoured play with Hieronymus Bosch, the artist whose Garden Of Earthly Delights offers a cavalcade of barbarous carnality, humanity reduced to meat and unfettered malice at the hands of ghastly demonic monsters. Accordingly, death stalks these songs, from the opening “‘See You Don’t Bump His Head’” – a title borrowed from lines cut from From Here To Eternity, Montgomery Clift addressing the soldiers carrying the corpse of Frank Sinatra’s character – through to the closing “The Day The ‘Conducator’ Died”, whose title references the abrupt execution of former Romanian dictator Nicolae Ceausescu. Its wanly repeated refrain describing the impatient firing-squad, “And nobody waited for ‘fire’”, is this album’s equivalent of Tilt’s haunting “I’ll give you 21, 21”.

Elsewhere, Walker punctures the more hifalutin coinings of “Corps De Blah” – “Epicanthic knobbler of ninon, arch to Macaronic mahout in the mascon” is not untypical – with more gaseous extrusions, “sphincters tooting our tune”. It’s just as varied musically, building from an a cappella intro through isolated, fragmentary noises before a barking cuica squeak and organ dischord are suddenly barged along by determined but intermittent drums. Shrill bursts of strings like shrieking sirens, a demonic twinkle of abstract zithering, bee-buzz raspberry farts and dentist-drill whines, a grisly collusion of pain and bathos, are punctuated by merciful lacunae of silence, each more tantalising than the last, until the final image of “double-bladed axe poised over shoulder” is accompanied by the metallic swish of machete blades. Off with his head! The same swishing blades accompany Walker’s rudely disputatious dismissals of Biblical claims in “Tar”, the aural equivalent of Occam’s Razor slicing God from the universe. “There but for the grace of God goes God,” he mutters.

Elsewhere, “Phrasing” uses some stark, angular guitar riffing, Latin percussion and a stop/start dynamic alongside more meaty metaphors to accompany a glum meditation which opens with the claim “Pain is not alone” and ends sourly with “Here’s to a lousy life”. “Epizootics!” employs the deep, burring drone of tubax, spiky skronk guitar and BJ Cole’s mutant pedal-steel tones over a fast galley-slave tattoo and errant fanfares of trumpets to animate a lyric of tropical putrefaction, “greasy black hairlines” and “melianomed ankles”, in which a fat chap is vividly (and revoltingly) depicted as “Adepocere in a zoot, sloshing, karat, ballooning down the street”. “SDSS 1416+13B (Zercon, A Flagpole Sitter)” is undoubtedly the album’s centrepiece, a colossal parade of grotesque imagery whose cryptic lyric embraces classical and Biblical allusion, private jokes, astronomy and anatomy, with contemporary curiosity alongside atavistic antiquity. It remains the most impervious to explication – I’m still no clearer, for instance, about the strings of Roman numerals that are recited at various junctures, nor about any bar the most obvious connection between Attila The Hun’s dwarf jester (Zercon) and the brown dwarf star of the title – and its 21-minute trail of sonic exclamations, textures and evocations is the most abstract of the album, effectively a Foley-board of audio effects as much as a musical composition. But at least there’s plenty of meat to work with, to use the apt terminology; all that’s required is to pluck up the inclination to want to hear it for a fourth and fifth time.
Andy Gill