“Spunk-stiffened tresses!” How an avant-metal band made Scott more accessible... 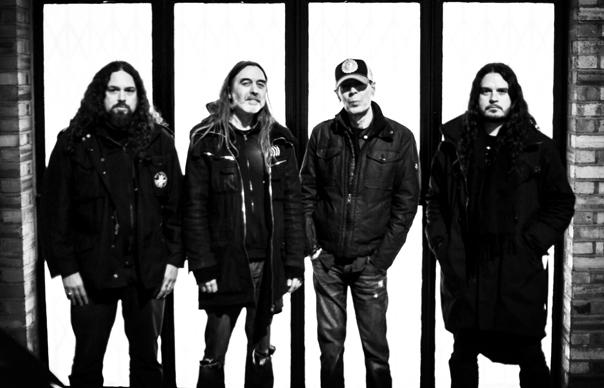 “Spunk-stiffened tresses!” How an avant-metal band made Scott more accessible…

You probably won’t have seen it coming: the studio alliance between Scott Walker, ‘60s crooner turned avant-garde auteur, and the American heavy metal group Sunn O))). But when the collaboration was announced back in July, with a merged “Scott O)))” logo that spread across social media like a forest fire, there was the immediate sense this could be a complementary partnership.

Walker has long since moved from his early MOR days into more cryptic and perverse realms. The rich baritone he once commanded has long been replaced by a fraught, high-wire tenor designed to jangle the nerves, while the songs themselves – produced with long-time collaborator Peter Walsh and a small team of musicians – have fixated conceptually on tyrants, dictators, and on the track “SDSS14+13B (Zercon, A Flagpole Sitter)” from 2012’s Bish Bosch, the fantasised connection between a remote brown dwarf star and a dwarf jester in the fifth century court of Attila The Hun. Stephen O’Malley and Greg Anderson of Sunn O))), meanwhile, are not your everyday metalheads, their protracted and atmospheric drones heavy but seldom rocking, as informed by the music of La Monte Young and Stockhausen as Mayhem and Black Sabbath. Both make challenging music at the very edge of their discipline; together, they prove even scorched earth can feel like common ground.

The germ of Soused came in 2008, when Sunn0))) approached Walker’s management to see if he’d contribute vocals to a song on their 2009 album Monoliths & Dimensions. It wasn’t to be, but Walker got back in touch in early 2013 to let them know he was writing new material with collaboration in mind. Five tracks long, with each clocking in somewhere between eight and 12 minutes, Soused has the feel of a latter-day Scott Walker album with SunnO)))’s guitar drone laid like bedrock. Yet the presence of Sunn0))) – here O’Malley, Anderson and auxiliary member Tor Nieuwenhuizen – exerts constant and welcome force. Whereas Bish Bosh occasionally gestured to the heaviness and dynamics of metal, Soused is soaked in it: carried along on a sludgy tide that imbues Walker’s deviant theatre with palpable, physical menace.

The opening “Brando” begins as a slow-motion pirouette, Walker pale and operatic over hard shards of electric guitar. Sunn0)))’s oppressive drone merges with a relentless throb of synth, and in lieu of percussion, we hear the sporadic crack of a bullwhip. Lyrically, the song alludes to the life of Marlon Brando: Walker sings of “dwellers on the bluff” – a native American phrase that lent its name to Omaha, Brando’s home state. The bullwhip is probably a reference to Brando’s sole directorial credit, the 1963 western One-Eyed Jacks, in which he plays Rio, a gunslinger tied up in a town square by the authorities and lashed without mercy. In Walker’s hands, though, the image has a sadomasochistic quality. “A beating would do me/A world of good,” he sings.

Soused is not short on black comedy. The gigantic “Herod 2014”, a thing of jackboot drum machines and panicky saxophones, follows a mother as she endeavours to save her progeny from some cannibalistic Stasi: “Their soft, gummy smiles/Won’t be gilding the menu”. In one of the simmering lulls of “Bull” we are greeted with the simile “leapin’ like a river dancer’s nuts”. “Fetish”, meanwhile, finds Walker’s pale, ghostly voice drifting through lyrics about lepers, fluffers and “spunk-stiffened tresses” as the band – explore some diabolical dynamics. Silence and cacophony are set in terrible contrast, so when the sounds swing in – sudden blasts of digitally contorted horns and abrupt spasms of drumming – the result shocks, like a jolt of electricity.

Much consciously extreme music can feel clichéd in its pursuit of shock or transgression. But Walker’s reputation as a cinematographer is deserved, and his evocation of sonic horrors feel filmic in its command of atmosphere and tone. The prologue of “Lullaby” summons unbearable tension, Walker promising – threatening? – “Tonight my assistant will pass among you/His cap will be empty” over low, pensive drones. As it peaks, with shrill, piercing keyboards, Walker sings snatches of “My Sweet Little Darling”, a traditional song popularised by Renaissance composer William Byrd. The meaning remains inscrutable, but there is surely significance to be found in Walker’s nostalgic entreaties: “Why don’t painters/Paint their cloudy spines/Chiaroscuro, the way they used to?”

Enigmatic, abstract, violent, absurd: stick Soused on a C90 with Lulu, take it on a family holiday, and you possibly have grounds for divorce. But the presence of Sunn0))) actually seems to make Walker’s muse more accessible, their drones a frame to expressionistic excess. The result is the most accessible Scott Walker album since Tilt, perhaps even longer. Meanwhile, by gesturing towards a full-band line-up, would it be excessively optimistic to speculate Soused might augur Scott Walker’s return to the stage? For that would certainly be something to see.
LOUIS PATTISON