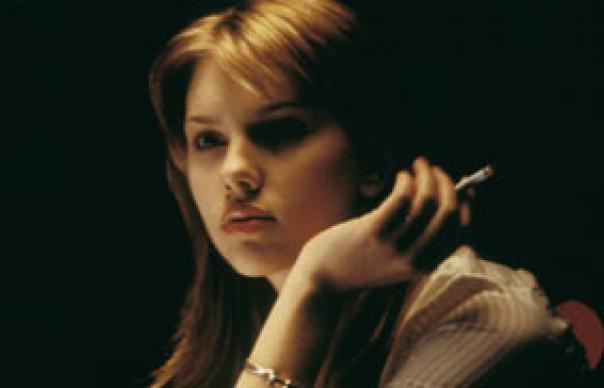 It’s tempting to see Scarlett Johansson as a fantasy creation for gentlemen of a certain age. She appears in Bob Dylan videos; she joins the Jesus & Mary Chain onstage at Coachella to sing “Just Like Honey”; she plays the romantic lead in Woody Allen films. Paunchy Bill Murray look-alikes think they’re in with a chance, while scrawny Steve Buscemi types can get off with her best mate. Now, to further indulge those middle-aged fantasies, Johansson has recorded an album featuring ten – quite obscure! – Tom Waits songs.

The key with cover versions is to reinvent them and, over the years, Waits’s canon has proved remarkably adaptable to a variety of treatments (jazz, country, folk, thrash punk) by everyone from Tim Buckley to The Ramones. The guiding light behind Johansson’s reinventions is her producer David Sitek, guitarist with TV On The Radio and desk-jockey for post-punkers like Foals, Liars and the Yeah Yeah Yeahs.

Sitek’s default setting here is to use dreamy, alt.rock soundscapes, equal parts Cocteau Twins, Sonic Youth and Mercury Rev. The title track, originally a mournful brass band dirge, is pepped up with a Casiotone drum machine; the ragtime guitar accompaniment of “Fannin Street” is transformed into a Mary Chain/Phil Spector stomp (with David Bowie on backing vocals); “Town With No Cheer” sees the bagpipes and synths of the original replaced by swirling organs and gamelan percussion. The “poppiest” track is “I Don’t Want To Grow Up”, where Waits’s beery singalong becomes a thumpy electro-pop belter, lifting its two-note bassline from Melle Mel’s “White Lines” and its breakbeat from New Order’s “Confusion”. Best of all is “I Wish I Was In New Orleans” – on Small Change, it sounds like the mournful lament of a hundred-year-old man; here Johansson’s guileless, breathy voice and the spooky, plinky-plonky celeste turns it into a demented nursery rhyme.

The only problem is that Johansson, no matter how much double-tracking Sitek uses, can’t really sing. Nor can Tom Waits, to be fair, but Johansson’s bland, flat contralto leaves you admiring the Cocteau Twins-style sonic backdrops and wondering how another singer – Liz Fraser, perhaps? – might improve them. Now there’s an idea…

Is there a parallel between singing and acting?

Johansson: I feel that some of my favourite vocalists are acting in themselves. Music, to me, is often about bringing characters to life.
Sitek: When an actor makes a record it doesn’t always work because they resist the cinematic quality to their craft. So rather than to run away from the fact that Scarlett’s an actor, I said, let’s go with that, let’s have her bring the dead to life for three and a half minutes on top of this soundscape.

Johansson: Yes, with some you actually have to dig deep to work out the timing and melody. I have all these notes on my lyric sheets that probably make no sense to anybody – all these squiggly lines, arrows and weird dots.

Johansson: It depends where I am in my life: I’ve been listening to Alice and Black Rider a lot.
Sitek: Jockey Full Of Bourbon I lived that one for a couple of minutes, but I always return to Bone Machine because I relate to it a lot,

What albums did you look up to when doing this?

Sitek: I shamelessly stole so much from This Mortal Coil and the Cocteau Twins that I actually called Ivo Watts Russell and told him and said, hey, I can’t rip you off anymore! The least you can do is sequence the record! And he did.