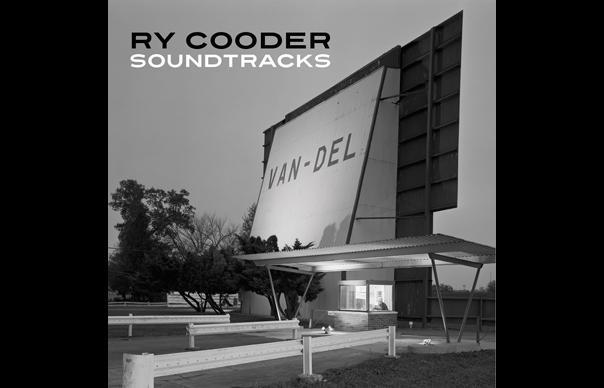 1980 was an auspicious year for Ry Cooder. As he exited the ’70s, Cooder had brought his considerable skills to bear on the blues, early jazz, R’n’B, Tex-Mex, country and calypso. But the new decade offered the opportunity to extend his range yet further: into film soundtracks, and the new set of creative disciplines they presented.

In fact, Cooder had already dabbled in films. In 1970, under the auspices of Jack Nitzsche, he had played bottleneck guitar on the Performance score. Meanwhile, in 1978, Jack Nicholson used some Cooder slide on Goin’ South; later that year, Cooder reunited with Nitzsche and another former collaborator, Captain Beefheart, on “Hard Working Man” for Paul Schrader’s Blue Collar. But in 1980, Cooder was approached by director Walter Hill to score his Western, The Long Riders. They subsequently worked together on another seven films across a 16-year period – five of which are included in this box set.

The score for The Long Riders found Cooder digging deep into traditional folk idioms. Assembling players he’d worked with previously on his solo albums – Jim Keltner, David Lindley and Jim Dickinson – alongside traditional players including Tom Sauber, Curt Boutese and Milt Holland, Cooder fashioned a historically authentic score. There are dulcimers, fiddles, banjos and Civil War-era songs. Indeed, much of Cooder’s work with Hill is predicated on this kind of approach, working to fit into the time and setting of the film.

After The Long Riders, Cooder’s ran two careers in parallel for much of the ’80s. His work as a solo artist and the increasing volume of commissions he undertook for Hollywood meant that by the end of the decade he’d released 13 albums in total, ten of which were film scores. By the middle of the ’80s, Cooder had begun to work with other directors apart from Hill. His score, Music For Alamo Bay (1985), accompanied Louis Malle’s drama about a returning Vietnam veteran. The “Theme From Alamo Bay” is one of Cooder’s most beautiful compositions, an elegant and haunting blend of traditional Japanese instruments, Cooder’s trademark slide and a wistful piano refrain from Van Dyke Parks. Elsewhere, Cooder augments the usual suspects (Keltner, Lindley, Dickinson) with John Hiatt, Chris Ethridge, Cesar Rosas and David Hildago for a polyrhythmic stew encompassing everything from barroom blues (“Gooks On Main Street”) to dusty ballads (“Too Close”) and more abstract tone pieces like “Klan Meeting”.

Tone pieces become an integral part of his masterpiece, Paris, Texas (1985). There are no songs to speak of (apart from Harry Dean Stanton’s melancholic “Cancion Mixteca”), just the stark twang and rattlesnake rustle of Cooder’s bottleneck slide. The “Paris, Texas” theme alone – based on Blind Willie Johnson’s “Dark Is The Night”, which Cooder covered on his debut album – is incredibly evocative; a single string slide guitar turned to the desert, full of space and atmosphere. Initially, the album appears fragmentary – some of these pieces are under two minutes, many are avant-garde tones – but on closer inspection it’s possible to divine a more cohert strategy at work here. Throughout, Cooder revisits his Blind Willie Johnson motif, and viewed holistically, Paris, Texas is an experimental variation on a theme, looping round “Dark Is The Night”.

After such a milestone, the more conventional Blue City (1986) feels like a step back. The sound is very mid-’80s: slap bass and sythns mingle with steel drums on “Elevation 13 ft”. We much console ourselves with one highlight: the tender acoustic wash of “Billy And Annie”. Crossroads (1986) similarly suffers from ’80s production values, and is perhaps Cooder’s least successful soundtrack. For Hill’s contemporary riff on the Robert Johnson story, Cooder’s score mixed fresh compositions with blues covers. As a solo artist, Cooder tended to privilege more obscure blues artists – but here, working with Sony Terry and Frank Frost, he comes closest to 12-bar blues, transforming JB Lenoir’s “Down In Mississippi” or folksong “Cotton Needs Pickin’” into rowdy roadhouse stompers. By contrast, Hill’s Johnny Handsome (1989), is a more ambitious affair, recorded with just Keltner and saxophonist Steve Douglas, with horn arrangements by Van Dyke Parks. Essentially, these are textured mood pieces like the keening “Fountain Walk” or the ambient wash of “I Like Your Eyes”.

By the time Cooder came to make Trespass (1993) for Hill, he had committed himself entirely to soundtrack work. He hadn’t released a solo album since Get Rhythm in 1987, and wouldn’t again until Chavez Ravine in 2005. Arguably, soundtracks gave Cooder greater freedom to experiment away from the more conventional requirements of a solo studio record. Trespass, recorded in cahoots with Keltner and trumpeter Jon Hassell, is among Cooder’s most potent, the closest he comes to experimental jazz. Hassell’s trumpet slithers round Cooder and Keltner’s electronically treated guitars and drums. The vibe is moody, dissonant. Cooder continued to record scores into the ’90s and beyond, but with less frequency; his last soundtrack to date is My Blueberry Nights, for Wong Kar-Wai.

This set is a good primer for Cooder’s soundtrack work, although two of his best – the Bayou twang of Southern Comfort and the rich 19th century idioms of Geronimo: An American Legend – are sadly absent. Here’s hoping a Volume 2 will follow soon.
Michael Bonner

You can read our extensive interview with Ry Cooder here