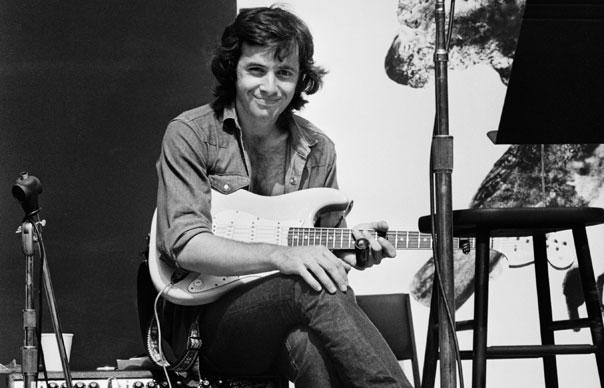 However you define this thing called Americana, Ry Cooder is surely its godfather. He’d doubtless guffaw at the suggestion, proffering that the music of the Americas belongs to those who created it, whom he has done his modest best to champion, yet to whatever tributary of tradition you turn, there you’ll find a Cooder recording honouring and interpreting it. Blues, R’n’B, soul, early jazz, Tex-Mex, calypso, gospel, Hawaiian, country – Cooder and his virtuoso fretboard skills have embraced them all.

The extent of his achievement is brought home on 1970 – 1987, its mundane title a tacit acceptance that Cooder evades categorisation. ‘Ethno-musicologist’ used to be bandied around, but one look at cover shots of him in 1930s drag on Into The Purple Valley, or with a Fender Strat pressed against a mohair jacket on Bop Till You Drop, and that tag withers. Cooder is way too funky to be a dusty academic, however arcane his tunings, time signatures and source material.

History and politics have always mattered to Cooder. The son of a left-leaning lawyer and folk singer, he grew up with Woody Guthrie anthems in his ears, their stories of displaced Okies resonant in his native California. Cooder’s Sunshine State is no Laurel Canyon idyll but the home of blue collar grafters, immigrants, trailer-dwelling petrolheads and Latin dandies, and his favoured songs tell an Everyman’s tale of empty pockets, cop hassles, delirious good times and broken hearts.

On his eponymous debut, Guthrie’s “Do Re Mi” rubs shoulders with “How Can A Poor Man Stand Such Times” by Californian songsmith Alfred Reed, while Willie Johnson’s “Dark Is The Night” gets the stark slide guitar previewed on the Performance soundtrack, later to become a trademark and win wider public attention on the Paris Texas soundtrack.

Into The Purple Valley raised his game, mixing Guthrie and Leadbelly with obscurities like the 1940s calypso “FDR In Trinidad” and 1920s gospel number “Denomination Blues”. In contrast came the fierce guitar of “Money Honey” and bouncing mandolin of “Billy The Kid”. Also on display was Cooder’s ability to transform a song; “Teardrops Will Fall”, a piece of 1958 pop trash, was recast as a tender ballad, Johnny Cash’s chugalug “Mr Porter” was slowed to languor.

After such a tour-de-force, the blues-laden Boomer’s Story marked a loss of momentum, despite diversions like the dreamy 1930s Mexican hit “Maria Elena” and Sleepy John Estes voicing his own “President Kennedy”. Cooder renewed his onslaught on Paradise and Lunch and Chicken Skin Music, albums that defined his approach for years afterwards. Addressing his lack of vocal prowess, he added gospel backing singers, while Chicken Skin introduced Tex-Mex accordion wizz Flaco Jiminez. Both brought heft and variety to an eclectic assemblage of song. Bobby Womack’s “It’s All Over Now” emerged as a reggae jog, Jim Reeves’ country tear jerker “He’ll Have To Go” as a despairing love call from an El Paso cantina. There was Hawaiian steel guitar from Gabby Pahinul and 70 year old pianist Earl Hines vamping on Blind Blake’s “Ditty Wah Ditty”.

It all worked marvellously on stage, as testified by Showtime, with the show stolen by the spare bottleneck’n’vocals of “Jesus On The Mainline’ and “Dark End of The Street”, an adulterer’s tale from southern soulster James Carr that became a Cooder staple.

Jazz was a step sideways, a bookish delve into the 1920s era of vaudeville songs like “Shine” (rendered complete with non-PC preliminary verse) and of jazz pioneers like Jelly Roll Morton and Bix Beiderbecke, whose ambitions to create modern classicism were never fulfilled. Cooder’s arrangement of “In A Mist” offers a glimpse into an unrealised future.

Bop Till You Drop re-engaged with mainstream tastes, and yielded Cooder’s only hit, a cover of Presley’s “Little Sister”. It’s a tight, punchy album, whose soul flavours came via mnor hits by Ike & Tina, Howard Tate, Arthur Alexander and Fontella Bass. There’s a great Cooder original, “Down In Hollywood”, about the dangers of cruising downtown (“Don’t run out of gas!”), on which Chaka Khan whoops things up, but the record’s sound – it was the first album to be recorded digitally – doesn’t help its cause.

Borderline and The Slide Area extend the urban, electric mood of Bop, the former memorably making over Billy Joe Royal’s country hit, “Down In The Boondocks” from tinny country pop into epic neo-gopel splendour – one of Cooder’s best transformations. South-west flavours arrive on “The Girls Are From Texas” and the instrumental title track. The Slide Area is less winning, with tired versions of “Blue Suede Shoes” and The Impressions’ “Gypsy Woman”, which is quite beyond Cooder’s vocal powers. “UFO Has Landed In The Ghetto” is a hard funk workout that’s an oddity in Cooder’s canon, though his fascination for extra terrestrials would reappear on I, Flathead.

Cooder was immersed in soundtrack work by the time of Get Rhythm, which seeps a sense of impatience with the whole project of solo albums. Johnny Cash’s title track, Presley’s “All Shook Up” and Chuck Berry’s “13 Question Method” are routine, and the muscular production seems to shout, ‘Oh they want rock music, here it is.’ Delights include two originals, the knockabout “Going Back To Okinawa” and the sorrowful “Across The Borderline”.

Cooder’s weariness was understandable; he had laboured long for critical praise but received disappointing sales, and the US seemed largely uninterested in the people’s music that he had put before the country. Better, perhaps, to work with Walter Hill on a succession of fine movies, and later, to engage with his love of Cuban music on the hugely successful Buena Vista Social Club. It would be a long wait before Cooder sang again, though when he returned in the new century it would be with unexpected vigour.
Neil Spencer

Q&A
I assume that like most musicians you don’t listen to your old records?
This was the record company’s idea. They called and said they wanted to do it and I gave my consent. I don’t know how to even contemplate that stuff, it was all done so long ago. I still love the songs, and play some of them on stage, but I don’t listen to the records.

Do you have any favourites among the 11 albums?
No.

You covered a huge number of songs but wrote few yourself, unlike today, when you have become prodigious.
I didn’t know anything then. When I made the first album I was 24, and at that age you have nothing to say. I just played the music I loved and tried to do it justice. The thought was to record traditional music with modern methods, to reconstitute it using electric bass and so forth, to experiment. We can hear it played back, speed it up, slow it down, overdub – all things the original musicians couldn’t do. Making those albums was a good laboratory.

I would have liked some information about the histories of the songwriters, many of them pretty obscure, people like Washington Philips and Arthur Reed.
Reed was a vintage Appalachian fiddle player. He was popular but that he was recorded at all was a fluke. The history of how all those people made it onto disc is fascinating.

You didn’t just use folk and blues – I discovered that “Teardrops Will Fall” was by Dickey Doo and The Donts!
Wilson Pickett recorded it after he left The Falcons, that’s how I knew it. The label would have been looking round for material, that’s how it worked then; songwriters wrote and singers performed. There were plenty of other people who liked that stuff as much as me, but I was the one signed to Warner Brothers. I don’t know why they signed me, because to sell records you had to look and sound a certain way, which I didn’t. The moment I realised how it worked was when an A&R man asked, “When are you going to get a pair of leather pants?” Usually they aren’t so explicit, but they think it alright, and there was I fooling round with Leadbelly songs.

And many other styles of music…
When I started with Tex-Mex, Randy Newman told me, “You’re going to commit commercial suicide”. And I was saying, Oh but it swings, it’s beautiful and I’m having such fun. He was right.

But a lot of people liked it.
Oh, over there in Europe!

And you always had great reviews.
Critics don’t sell records, unfortunately. No one reads what they write anyway. Radio was one of the pillars of the business, and the people you had to curry favour with were the radio promo guys, who would take the records to the stations and genuflect to get them played, because as we know, the public airwaves aren’t really public. I really wasn’t a good team player. Eventually, for me, the string ran out.

You don’t like what the record business has become?
It’s a tragedy, because what made music great was the four minute pop song and the care that people took to create something that had never existed before. The loss of that idea is terrible. If it hadn’t been records we wouldn’t have had Nat King Cole, Flat & Scruggs, you name it. Nowadays musicians have to be an exhibit for a lifestyle rather than telling people what they feel or think. It’s corporate entertainment.

Are you heartened by the rise of Americana, that so many young musicians are now tapping into the same wellspring of tradition that inspired you?
It’s there for people who want to find a place, an alternative to being computer scientists or bakers or whatever is on offer. It’s good to see more young people playing instruments. You can tap into tradition, then it’s up to the musicians to do it justice.

Do you have a current project or two?
I’ll be touring the U.S. with The Chieftains next year, which is always fun. In the meantime I am making a record for the survivors of the Fukushima nuclear disaster in Japan, to talk about the dangers of its aftermath, the extremely high levels of radioactivity, which have gone largely unreported. I am going to go there and talk to the farmers and inhabitants, and write new songs that talk about what has happened, to try to make a record for the people. I’ll get the songs translated – it’s hard, because Japanese language is so different, and they don’t have protest music in Japan.
INTERVIEW: NEIL SPENCER