Remastered, if not remade or remodelled: Roxy’s radical motherlode... 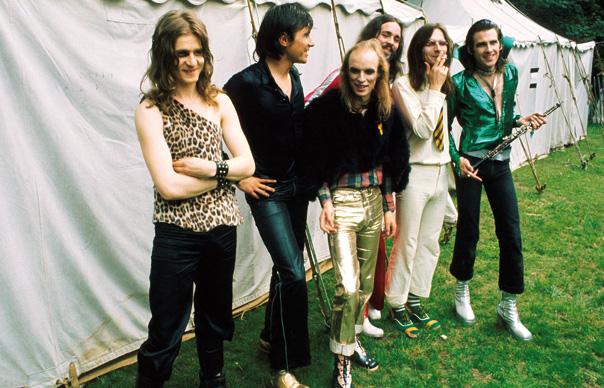 Remastered, if not remade or remodelled: Roxy’s radical motherlode…

piccadilly 1972: taking a turn off main-street, away from the cacophony and real life relics, & into outer spaces myriad faces and sweet deafening sounds of rock ’n’ roll. And inner space…the mind loses its bearings. What’s the date again? (it’s so dark in here) 1962 or twenty years on?

So wrote Simon Puxley in the sleevenotes to Roxy Music’s eponymous debut, hoping to conjure something of the record’s timeslip glamour, struggling to live up to the gatefold photos depicting band members as delegates from some galactic parliament. Forty years on, remastered (if not remade or remodelled) for this latest anniversary box-set, the band has lost little of its uncanny, atemporal enchantment.

By delicious serendipity, Roxy Music’s debut was released just one week after The Rise And Fall of Ziggy Stardust And The Spiders From Mars, as though part of some co-ordinated campaign to declare the ‘70s officially open. Yet, for all its genius, Bowie’s album nevertheless sounds unmistakeably 1972, sci-fi in content but almost trad in form. Roxy Music, by contrast, still sounds intoxicatingly unplaceable.

“Re-Make/Re-Model”, makes things almost too plain, mapping the co-ordinates of this strange new world, pausing to quote from Duane Eddy, The Beatles, Cecil Taylor, King Curtis, Robert Moog. (Mystifying absent from the V&A’s exhibition last year, it is in fact the birthcry of the postmodern sensibility.) Elsewhere things are more richly suggestive: “Ladytron” conjuring a capering Joe Meek moonman funk, “Chance Meeting” evoking the Noel Cowardly dreamers of Brief Encounter trapped in some ghastly purgatory, “If There Is Something” reaching a pitch of Piafian desparation. The effect is something like the London of Terry Gilliam’s Brazil: pre-war romance rewired by steampunk tech, curdled by very modern terrors.

Acclaimed almost immediately as one of the greatest debuts of all time, in truth Roxy Music is not perfect. Not even remastering can bolster Pete Sinfield’s tinny production, and “Bitters End” in particular closes things on an almost Bonzo note of bathos.

They were just getting warmed up. Just nine months later For Your Pleasure was the full flowering of the band’s first incarnation. Roxy was indisputably Bryan Ferry’s baby, but in Andy Mackay, Phil Manzanera and Brian Eno the band had enough maniacs and visionaries for countless bands, scenes, movements. The presence of so many creative personalities in one group could have been merely extravagantly chaotic, but For Your Pleasure is a marriage of true minds unmatched in British pop. “Do The Strand” is a peerless single, a breath-taking balance of Broadway wit and superpop bravado, but it’s an aperitif before the full feast of the album. “The way you look… makes my starry eyes shiver” Ferry croons on “Beauty Queen”, and by some supernatural synaesthesia he could be describing the auditory swoon of the record. Yet the cinemascope opulence has a heart of darkness. With “In Every Dream Home A Heartache” and “The Bogus Man” Ferry’s opulent screen dreams are stalked by dread, as though Powell and Pressburger were filming the work of JG Ballard.

It’s fascinating to wonder where this crew might have voyaged after For Your Pleasure, how the starcharts of ‘70s pop might have been redrawn, but Eno’s departure following the album’s release renders such speculation forever moot. The loss might have capsized a lesser band, but in practise it actually steadied the ship – possibly too much. Even Eno had to acknowledge that Stranded, incredibly released just eight months later, was possibly the group’s masterpiece. It was certainly a commercial success, with “Street Life” even tacking towards the mainstream. But for all the polished majesty of “Mother Of Pearl” it was hard to escape the suggestion that some crucial engendering antagonistic grit had been lost.

It’s not to belittle the splendours of Country Life and Siren – “The Thrill Of It All”, “Bitter-Sweet”, “Love Is The Drug” to name but three – to describe them as further refinements of an already perfected blueprint. 1979’s second-act comeback Manifesto was a bold, intriguing response to punk – “I am for a life around the corner, that takes you by surprise”, Ferry declared on the title track – but too little of what was to follow could deliver on those aspirations. 1980’s Flesh+Blood tellingly featured two covers, “In The Midnight Hour” and “8 Miles High”, resolutely free of any of the wit of the earlier solo album “readymades” and was notable chiefly for Ferry’s progress towards what’s become his signature mid-Atlantic gilded funk. He arrived at his destination on 1982’s Avalon, the title evoking some timeless never-neverland of misty longings. Ironically it’s the most dated-sounding album here, the fretless, burbling bass, the wistful horns, the twanging Manzanera guitars forever evoking early ‘80s easy listening elegance.

As last year’s Olympia made clear, it’s where Bryan Ferry remained ever since, like a time traveller whose machine had finally gone on the fritz. But this largely immaculate box is ample testament to the fact that, for a while, for an unparalleled five or six album run, Roxy Music were the most distinguished adventurers British pop has ever known.

Extras: The Roxy catalogue has been so thoroughly repackaged over the years there’s little left to bring to light. Most of the b-sides and non-album singles appended to the albums were previously available on 1995’s The Thrill Of It All box set. The few tracks here new to CD are single and US versions, generally simply edited for radio. 2/10
Stephen Troussé