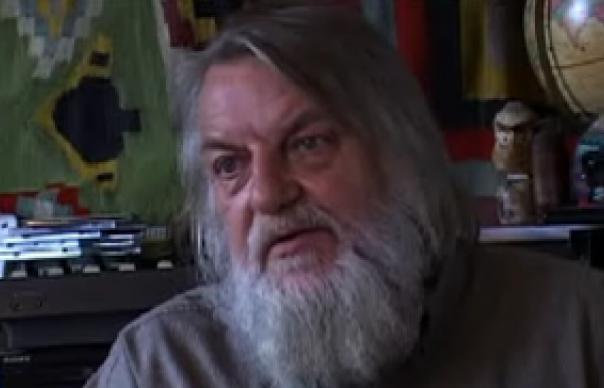 The first clue to ‘Comicopera’ – Wyatt’s ambitious, 16-track concept album in three acts – is that the press release was written by Alexis Taylor of Casio popsters Hot Chip. Taylor describes his love of Wyatt’s music of the early 1980s, recordings that were “unfinished-sounding, barely accompanied odds and ends”.

And, if much of Wyatt’s work of the last decade has invoked the woozy, pastoral jazz rock of his 1974 masterpiece ‘Rock Bottom, ‘Comicopera’ instead revisits Wyatt’s early 1980s albums like ‘Nothing Can Stop Us’ and ‘Old Rottenhat’.

Here those lo-fi tropes – cheap synth drones, vocoders, minimal drum machines – are refracted through a jazz prism. The drones are provided by Wyatt’s crack horn section (including trombonist Annie Whitehead and tenorist Gilad Atzmon), the vocoder effects come from the digitally treated voices of guest vocalists (Brian Eno, Karen Mantler and Monica Vasconcelos), and the minimal percussion multi-tracked by Wyatt himself. And it’s telling that Wyatt plays as much trumpet as he sings – like Chet Baker, his trumpet tone shares the same beautifully bleak, child-like timbre as his singing voice.

Act One, largely co-written with his wife Alfreda Benge, starts happily (the perfectly crafted love song “Just As You Are”, the romantic post-rock of “You You”, the melancholic hymn to old age “AWOL”). Act Two dabbles with spirituality (the whimsical “A Beautiful Peace”) before being jolted into reality by events in Iraq (“(i)You planted all your everlasting hatred in my heart(i)” he screams on “Out Of The Blue”). From there, Act Three moves as far from Anglo-American pop as possible, with two tracks in Spanish, another in Italian, and a highly textured solo improvisation from jazz vibraphonist Orphy Robinson.

If there’s a criticism here, it’s that the structure doesn’t really work – the songs just tumble out relentlessly, with no real flow, and Act Three sounds more like a Euro-Communist EP that’s been tagged onto the rest of the album. Yet each song works brilliantly in isolation, making this a treasure trove of Wyatt’s finest work ever.

Q AND A: ROBERT WYATT

UNCUT:How do you characterise these last three records?

RW:They’re band records. It’s an Ellington thing, everyone gets their moment. It’s not a philanthropic thing. The rest of it is variations on bloke on his own with keyboards. I think they have something in common; I’m a middle-aged bloke, a lot of blood’s flowed under the bridge now. The other thing they have in common, is that Alfie really put the pots on when it came to helping me with words and stuff. The whole first third of the new record has none of my words on it. When the second section starts with my words you think, ‘oh it’s him again.’

What about “Beautiful Peace”? I can’t recall a guitar song of yours quite like that.

I think it’s simply because the tune is based on a Brian Eno tune. I always like doing stuff with Brian. We’re so different and what we do together is so different to what we do apart. it’s the Singalongabrianeno song