More deliciously dark Americana. And a few surprises too... 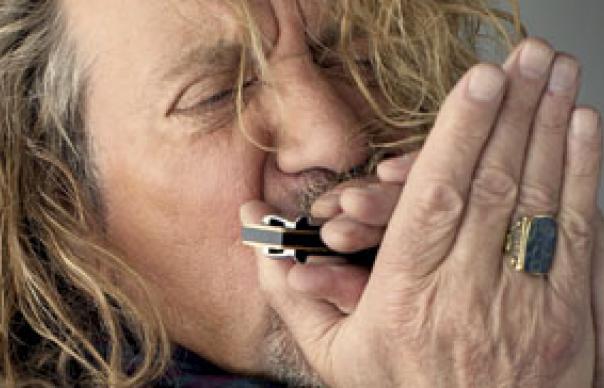 How do you follow a multi-million selling, multi-Grammy winning, unexpected runaway success like 2007’s Raising Sand? Answer: with great care and an equal amount of verve. On Band Of Joy Robert Plant pulls off a tricky sequel by giving the public more of what they so liked on Raising Sand, while honouring his wider musical obsessions. Once again the songs are a scintillating patchwork of deep, dark Americana – antique soul and blues, aching country balladry, obscure modern curios – and once again they are sung and played with ferocity, tenderness and artistry by a blinding set of sessioneers.

Yet Band Of Joy is its own creature. Firstly it isn’t a set of duets – Plant and Alison Krauss did reconvene in the studio but the alchemy between the pair proved fitful. Country singer Patty Griffin supplies Plant with a female foil this time round, but her presence is confined to harmonies. Producer T Bone Burnett is also gone, co-production duties being handled by guitarist Buddy Miller, the Nashville eminence who so dazzled as a band member on the Raising Sand tour, and whose sonic inventions are central to Band Of Joy.

That title speaks loudly of Plant’s intentions. It’s the name of one of his early groups, when the teenage Plant and drummer John Bonham were chasing round the black country building their reputations while staying penniless, “stealing milk bottles off doorsteps and siphoning petrol from vans” as Plant now recalls. Then, as now, he was offering cover versions of punchy R’n’B and the West Coast psychedelia that’s a discernible influence on Band Of Joy.

The young Plant would probably wince at the sanctified bluegrass he now embraces – much as Jimmy Page pulled a baffled face as Plant passed up a Led Zep reunion tour in favour of promoting a country LP – yet there is a tangible sense of the 61-year-old singer coming full circle, pulling the entirety of his career into a satisfying unity. As much was clear on the Raising Sand tour, when he and Krauss unfurled quiet storm versions of Zep classics like “Black Dog” and “The Battle Of Evermore”. It’s a trick Plant is currently repeating, folding into live shows “Houses Of The Holy”, “Tangerine” and “Gallows Pole”. The acoustic, rural spirit of Zeppelin III is close at hand here.

His live show also includes “Down To the Sea” from 1993’s solo album, Fate Of Nations. Although Raising Sand shifted public perception of Plant from strutting old rocker to savvy renaissance man, his solo career (now twice as long as his time in Zeppelin) includes albums not so different to his current output – 2002’s Dreamland, his homage to ’60s America, is a case in point.

Rarely in his post-Zep years has Plant sung as well as he does on Band Of Joy. By his own admission working with Alison Krauss taught him much about vocal technique, not least about harmonising, and the result is a more relaxed, intimate style than the fire and fury of old. These days he feels less obliged to compete with the musicians without whom, as he keeps declaring, “I’d be nothing”. Without a charismatic frontman, on the other hand…

Lead track and single “Angel Dance” is a great place to start. A Los Lobos number, its “tomorrow is a new day” sentiments are nursery-rhyme simple but dramatised by a cavernous production and elastic Bo Diddley beat packed with shimmering guitars. From such an optimistic opener the LP’s sequencing arguably takes a wrong turn. Richard Thompson’s “House Of Cards” – a stitch of Anglicana in an American songbook – is severe in sentiment and rhythmically halting. “Central Two Nine” is alkali to Thompson’s acid, a stomping acoustic blues borrowed from Lightning Hopkins but imbued with a banjo hoedown spirit.

The shift into “Silver Rider” is another troublesome leap. It’s the first of two tracks – the other is “Monkey” – by Minnesotan trio Low, specialists in crepuscular, lo-fi rock and opaque, frequently apocalyptic sentiments that may or may not stem from their Mormon faith. Plant and Miller honour Low’s dark moods with their own sonic flavours. Miller and his wife Julie are Nashville alumni (as writers, players, producers), but Buddy and Robert share a passion for 1960s West Coast psychedelia – Moby Grape, Arthur Lee – which is granted full rein here, with spiralling guitar solos and echoing production. There’s a hint of danger, too; when Plant sings “Tonight you will be mine”, his motives don’t sound altogether romantic.

The Low songs offer a moody shade from the palette of Americana that sits uncomfortably alongside grittier material like “You Can’t Buy My Love” and “Falling In Love Again”, two slices of American soul. The former, from Southern belle Barbara Lynne, is too slight to add much beyond a gleeful, Beatleseque arrangement (think “She’s A Woman”) but “Falling In Love Again” is a swooning love call fresh out of church. Plant slows down the original by the Kelly Brothers (little known, though you can find them in their pomp on YouTube) for a piece close to harmony heaven. “The Only Sound That Matters” is another splendid obscurity brought to light. Originally by Nashville band Milton Mapes, its Springsteeny lyrics, promising “escape into the night” are wound round with steel guitar.

The album’s closing quartet of tracks is a microcosm of American folk song. Sung to Miller’s clucking banjo, “Cindy I’ll Marry You One Day” is a hootenanny perennial, though Plant gives it a bawdy flourish: “She took me to the parlour and cooled me with her fan”, he coos. “Harm’s Swift Way” by that bleakest of country poets, Townes Van Zandt, is delivered warm and direct despite a foreboding. “Satan Your Kingdom Must Come Down” is a Carolina gospel song whose origins are lost in time (a 1930s version exists). Stripped down, its fateful religious tone sounds like the LP’s closer, but Plant has a further trick up his sleeve. “Even This Shall Pass Away” is a stately Victorian poem by journalist and anti-slavery campaigner Theodore Tilton, with a title that’s slipped into common parlance. Plant transforms it into a mercurial meditation on mortality, singing it to wire-brushed drums and a gnarly Hendrix-like guitar. It’s the sound of a man confronting his own inevitable end with humour and dignity. Let’s hope he doesn’t move on any time soon. As Band Of Joy proves, this particular wellspring is far from dry.
Neil Spencer