Rilo Kiley – Under The Blacklight 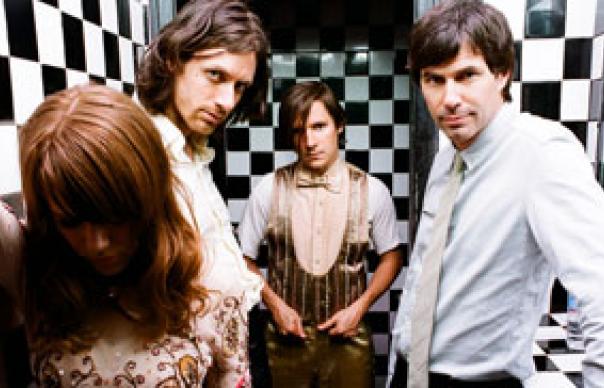 Blame Mr Young. Way back in ’72, when his “Heart Of Gold” hit the top of the US charts and he had the chance to become the biggest rock star in the world, he bottled it. Old Neil – or young Neil as he was then – couldn’t stand the heat, couldn’t shoulder the workload, shied away from the spotlight and decided he’d rather spend his days, uh, getting stoned, man.

But Neil’s always been a canny operator and, with a few well chosen words, he turned commercial suicide into the coolest artistic statement in the world: “This song (“Heart Of Gold”) put me in the middle of the road,” he said in the sleeve notes to his ramshackle compilation, Decade. “Travelling there soon became a bore so I headed for the ditch. A rougher ride but I met more interesting people there.”

Voila! Navel gazing and bleating to the converted became a raised middle finger to the Man.

With that one much-quoted phrase – nearly as daft, when you come to think about it, as his fatal “It’s better to burn out than to fade away” – he eternally legitimised the slacker art of wimping out and paved the way for future generations of bands who hit the motherlode to skedaddle back to the margins when the fun got too much like hard work.

In fact, I guess you could say with that one quote old Neil invented the mythical nonsense we’ve come to accept as Indie.

What’s all this got to do with Rilo Kiley? I thought you’d never ask. Well, one of the consequences of the young Mr Young legging it back to the porch to whittle away at songs written solely for himself (and if anyone else liked them it was, of course, a bonus) was that it called into question the motives of anyone with the guts and the gumption to make a grab for mass attention. The desire to sell loads of records and have your songs heard beyond your circle of cognescenti was suddenly deemed artistically insincere – a sell out.

And people who should really know better are saying that about Rilo Kiley. They are saying that Under The Blacklight is the band’s “Fleetwood Mac Moment.” This is what people always say when a group fronted by a woman coming from an indie background makes a record that is anywhere near half listenable. This is what they said when Courtney Love made the wonderful Celebrity Skin. And, I might add, it’s an observation more often than not delivered with a sneer.

Well, OK, Under The Blacklight is by far and away the most accessible album that Rilo Kiley have ever made. But, d’you know what? This is a GOOD THING!

Up until now, I’ve always found them slightly irritating. There was an affected kookiness to Jenny Lewis’ vocals on The Execution Of All Things, a forced, jittery weirdness to her lyrics on More Adventurous that seemed deliberately set up as self-defence mechanisms against those albums being purely what they yearned to be: Pop. Thankfully there is none of that nervousness to Under The Blacklight. From the opening “Silver Lining” to the closing “Give A Little Love”, this is a confident collection of songs that – say it loud and say it proud – wants a little piece of your heart no matter how cool you think you are.

The major shift here in terms of songwriting is in the presentation. Ms Lewis has jettisoned the loose and scratchy indie sketches for the warm immediacy of classic black pop music – Motown and Stax especially – to get her thoughts across. This is a step on from Rabbit Fur Coat, her recent quasi-confessional side project with the Watson Twins, where she modelled the best songs on recollections of Laura Nyro making gospel whoopie with Labelle.

Forget the Mac for a moment. What Rilo Kiley have done here is what The Eagles did between Desperado and On The Border – stopped listening to their coked-up peers on the LA scene, cut loose of their fears and started listening to the radio. In fact, the funky “The Moneymaker”, fruggy “Smoke Detector” and boldly latinate “Dejalo” sound so catchy and carefree it takes a while for them to reveal their dark obsessions with sex, money and the corrupting relationship between the two.

“The Moneymaker” has loads of fun with the stripper/client power conundrum, “Smoke Detector” ogles “a girl in a tanktop” who looks hot on the dancefloor because “she is not wearing a bra“, “15” throbs with doomed, illegal druglust and “Dejalo” is downright filthy (“She sleeps on your right side/ She gets nailed, I get tied/ I sleep on your left side/ A hundred ways to keep love alive“).

Ms Lewis grew up in the valleys around LA where all the sex movies are made and this has always provided rich pickings. But the sexiest thing about Under The Blacklight is her naked, bell-clear voice which injects an alluring country twang into even the most soft rock settings. Her whisper behind guitarist and co-songwriter Blake Sennett’s “Dreamworld” brings a hint of “J’Taime” to the album’s most Rumours track, and the way she delivers the word ‘drag’ to the title track (“When you get sober/ Will you get kinder?/ Cos when you get uptight/ It’s such a dra-a-ag“) is actually the coolest thing recorded this year.

Mac Moment? Under The Blacklight is more like Blondie’s Parallel Lines; a quality album choc-ful of what we used to call hits. Those guys in the ditch? They’re sneaking guilty glances at the stars.


UP CLOSE AND PERSONAL: JENNY LEWIS

UNCUT: People are saying Under The Blacklight is Rilo Kiley’s Fleetwood Mac Moment.

JENNY LEWIS: Haha! I’ve heard that, yeah! I’ve heard the Tusk comparison, which is really a compliment. Better to have a Fleetwood Mac Moment than a Miami Sound Machine Moment which I’ve heard kinda loosely used in reference to one of the tracks called “Dejalo”.

UNCUT: The album certainly sounds bigger than before, more a pop record than an indie one.

JENNY LEWIS: Well, thank you. I’ve always been a fan of pop music and if you listen to our earlier recordings and our early demos, we started out as a pop band and sort of moved away from that a little bit. I don’t think we’ve ever really been an indie band, it’s just that we’ve made records that were released on independent labels and we kind of worked with what we had at our disposal.

UNCUT: So it was a conscious decision to go pop…

JENNY LEWIS: Well, I wrote most of the songs while on the road touring my solo record (Rabbit Fur Coat) last year. That was a very heavy time and I think these songs were written in response to that. I wanted to simplify the process and just write a bunch of pop songs.

And this time we had the time to deliberate and work with different producers. We recorded in three different sessions. The first two were with Jason Lader, who’s worked with Jay-Z and is one of Rick Rubin’s engineers. He’s worked with Rick for so many years on various projects that he also has a long beard and long hair ! Ha!

We started with Jason in a studio in Silverlake and then we moved to Sunset Sound where we finished up with a guy called Mike Elizondo who’s been working with Dr Dre for many years. He was involved in that 50 Cent track “In Da Club” which is awesome. He also produced the last Fiona Apple album.

With Mike, it was the first time we’d worked with a producer who got involved with the arrangements of the songs, to make them a little more…. tight. And we got to bring in extra musicians. Like, Jackson Browne plays guitar on “The Angels Hung Around”. I mean, Jackson Browne plays on one of my songs – what a mindblower!

UNCUT: More than any of your other work, Under the Blacklight sounds influenced by soul music.

JENNY LEWIS: Well, I’ve always been a fan of that sound. I mean, I’ve been a Laura Nyro fan since I was eight or nine years old. And on this record we got to bring in the Waters to do backing vocals. They performed on Michael Jackson’s Thriller!

UNCUT: Listen closely, though, and beneath the surface there’s some nasty stuff going on.

JENNY LEWIS: Yeah, I think that’s something that our band has always done. On the surface they sound like pop songs but inside they’re a little bit darker. In fact, I think these are some of the darkest songs I’ve ever written. They aren’t necessarily about me. Some of them are, sure, but some of them are about the most incredible sex I’ve never had.

UNCUT: Most of them seem to deal with sex and money and what happens when the two meet.

JENNY LEWIS: Well, I think that reflects growing up in Los Angeles, in the San Fernando Valley, the pornography capitol of the universe. For better or worse, that’s always informed my songwriting.

We’ve just done the video for “The Moneymaker” and I’m so proud of it. We held a casting call and actually cast people who work in the porn industry in Los Angeles. We got to meet with them and talk with them and, y’know, it’s not a social commentary or anything but I think we kind of realised that pornography is a definite level of showbusiness and that we all have to make those kind of decisions at one point or another – not necessarily ending up in pornography but… you can kind of see the progression and how it can happen.

UNCUT: You were widely lauded for Rabbit Fur Coat. Did it feel strange coming back to the band again. Weren’t you tempted to pursue a solo career with no-one else to answer to and compromise with?

JENNY LEWIS: Well, I did enjoy it immensely. It was a very liberating experience. That was a really important year for me. It built my confidence and I realised that I didn’t necessarily need anyone else. But I was glad to get back to the band because we’ve worked really hard together. We’ve been a band for 10 years and all the things that I was able to do with my record were only as a result of the hard work we’d put into Rilo Kiley.
I mean, coming back to the band was a little… stiff. We hadn’t played together for a couple of years but once we were over that we enjoyed ourselves.

UNCUT: There’s a good chance that this will be a very big record for you. Are the band ready to become superstars?

JENNY LEWIS: Wow! You’re the first person who’s ever said that to me! But yeah, if you look at our band, it’s always been a gradual progression so I can’t imagine anything bad happening. Y’know, whatever happens well see it through.