Rhiannon Giddens With Francesco Turrisi – There Is No Other

An acoustic ‘side project’ of some potency 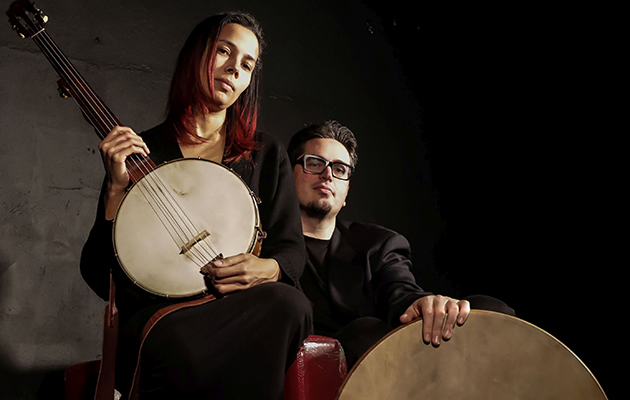 Rhiannon Giddens has yet to record a ‘proper’ follow-up to her brilliant second solo album Freedom Highway, but there has been no escaping the restless creativity of the Carolina Chocolate Drops founder. Since that Grammy-nominated solo release in 2017 we’ve heard her folk-soul voice and earthy banjo playing on Music From The American Epic Sessions alongside Jack White and Alabama Shakes and in collaboration with Kronos Quartet on their Folk Songs set. She’s written the score for the ballet Lucy Negro Redux, which premiered earlier this year, and convened the American roots supergroup Our Native Daughters, whose debut album was released in February.

Now comes There Is No Other, an acoustic set recorded with Italian multi-instrumentalist Francesco Turrisi, which one might describe as a ‘side project’, though the term hardly does justice to the potency of the music they make together.

Giddens represents a unique figure in black American music. You can trace her folk lineage back to Memphis Minnie, Elizabeth Cotten and Odetta, but none of them had the inclination or opportunity to delve so deeply into the music’s patrimony. She derives inspiration from the likes of Nina Simone and Mavis Staples, but the closest analogue, perhaps, is Taj Mahal, whose vision of African-American roots over his 50-year career has been similarly expansive and inquisitive.

Giddens like to freight the titles of her projects with socio-political layers, and so it is here. The “other” refers to the way discrimination and prejudice marginalises the culture and identity of those outside the mainstream, and the album serves as both a condemnation of “othering” and “a celebration of the spread of ideas, connectivity, and shared experience”. In particular, Giddens and Turrisi throw the spotlight on the profound but largely ignored historical input of Islamic culture into European, African and US music.

Recorded in five days in Dublin in August last year last with little editing and minimalist intervention from producer Joe Henry, Turrisi – whose southern Mediterranean upbringing versed him in a rich tapestry of Islamic influences blown in on the sea breezes from North Africa – proves to be a felicitous guide in unpicking these hidden connections. The conservatoire-trained polymath’s past collaborators include early music ensembles, jazz combos, contemporary classical composers, Irish roots singers and Balkan folk musicians and he’s all over this set playing piano, accordion, lute/oud, cello, banjo and Arabic percussion, while Giddens augments her vocals with banjo, violin and viola.

Global fusion projects are often constructed like Meccano, bolted and screwed together for no discernible reason. Here the cross-cultural connections are explored with an organic subtlety in which everything fits comme il faut because, as Giddens puts it, “We’re educated about where the music is coming from.” Yet it is far more than an academic exercise, for, as she adds, “when it comes to playing it’s just what we feel” – and it’s that marriage of purpose and passion that makes There Is No Other special.

Over a sombre, classical-sounding Arabic lute, the opener “Ten Thousand Voices” finds Giddens’ keening voice essaying the kind of melismatic quarter-tones that her labelmate Robert Plant enjoys. (Note to Nonesuch: how about a duet?) “Gonna Right Me A Letter” is a cover of a song by bluegrass pioneer Ola Belle Reed in modal Arabic-blues style, while the familiar “Wayfaring Stranger” is given a more conventional arrangement, sung hauntingly by Giddens over a plaintive banjo and accordion accompaniment.

The mix of Appalachian banjo and Arabic percussion conjures a intoxicating rhythm on the instrumental title track. “Pizzica di San Vito” requires considerable vocal gymnastics from Giddens as she gallops through a furious Italian folk dance, although her finest singing on the album probably comes on a gorgeous version of Oscar Brown Jr’s “Brown Baby”. The set ends with a brace of Giddens’ own compositions. “I don’t know where I’m going but I know what to do,” she sings as she strides down the freedom highway again on the stirring folk-blues of “I’m On My Way”, while “He Will See You Through” is a righteous gospel-lullaby sung with a soaring purity over reverberating cello and Turrisi’s plangent piano chords. This is acoustic roots music at its most glorious, and Giddens is fast becoming the genre’s brightest star in the firmament.