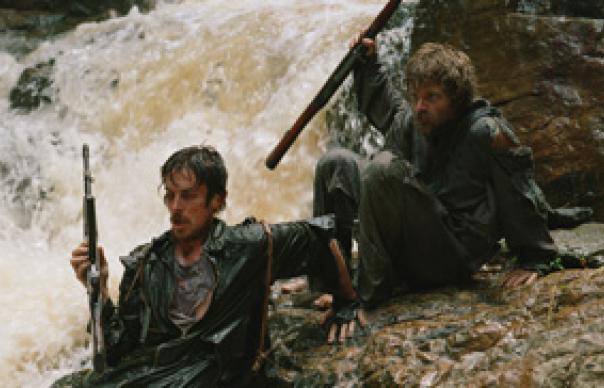 Poor old Christian Bale. Invariably pumped up or emaciated in his roles, he’s surely tormented his body enough to deserve a role as a restaurant critic one of these days. He suffers again in Rescue Dawn, an unlikely jungle escape drama by German maestro Werner Herzog. In recent years, with Grizzly Man, The Wild Blue Yonder and others, Herzog has reasserted his claim to be a documentary maker of genius, but in his first fiction film since 2001’s lamentable Invincible, he returns to the theme of his 1997 documentary Little Dieter Needs To Fly.

Here he fictionalises the true story of US fighter pilot Dieter Dengler (Bale), shot down during the Vietnam war. He’s interned in harsh jungle conditions with two other Americans (Steve Zahn and Jeremy Davies), both brain-fried by long captivity. Bale’s mixture of desperation and boy-scout determination carry the day against brutal odds, but in a trio of mad-eyed face-offs, it’s the underrated Zahn who steals the show.

Immensely watchable, gripping and thematically of a piece with vintage Herzog dramas such as Aguirrre Wrath of God, this is nevertheless his most mainstream film, and its gung-ho ending falls horribly flat. One suspects all concerned had an utterly miserable time making it – which will no doubt have suited the self-punishing Bale just fine.