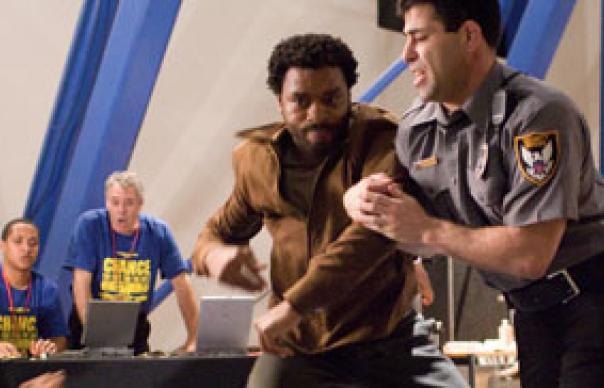 You don’t have to watch Redbelt for long to recognise something pugilistic in the rhythms of David Mamet’s dialogue. His characters jab at their lines, repeating them, stabbing them home after tactical pauses. And, since this is Mamet’s attempt at a fight movie, there’s a suspicion that he’s doing it deliberately.

Mike Terry (Ejiofor) is an idealistic jiu-jitsu master, operating in the blurry territory where cops and ex-soldiers rub against Hollywood. His fate changes when jittery attorney, Laura (Mortimer), walks into his studio and tussles with Joe (Max Martini), a cop, and a gun goes off. That gunshot changes everything, and Mike is sucked into the fight game against his principles.

Mamet (a jiu-jitsu blue belt) is more interested in Mike’s internal struggle than the action, and employs his usual Rubik’s cube plotting to evoke a world in which everything is showbiz, and everything is fixed. There are strong echoes of Robert Ryan in The Set-Up, and some great lines (“What do they want? Let’s financialize the problem.”) which suggest that behind Mamet’s tough guy façade there’s a romantic idealist struggling to get out.