Eccentric folk-rock about Buddhism and Cornwall 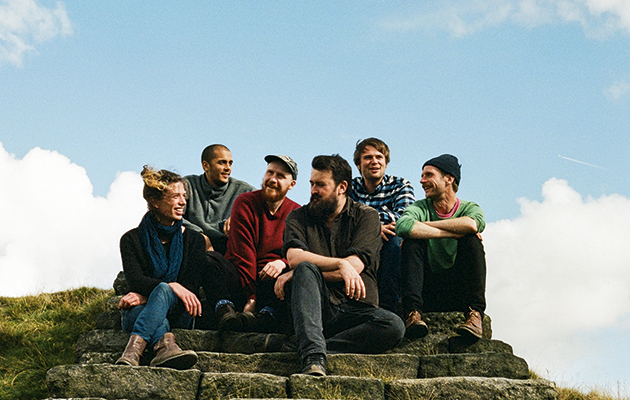 “Kukkurippa”, off the new album by the Cornish folk group Red River Dialect, opens with gently percolating percussion and the soft yet purposeful strums of an acoustic guitar, as an eddy of electric guitar notes coalesce into a rippling melody, like a kite caught in a breeze. It’s a lovely soundtrack to frontman David Morris singeing himself while cooking on a red-hot hearth. He sings about being lost in thought about how rarely he gets lost in thought; distracted, he picks up the pan and burns “my poor poor poor poor…” His voice trails off before he gets to the word “hand”, but for a brief second you can feel the sharp pain in his fingers and the pang of regret he feels for not being in the moment.

Morris writes in a matter-of-fact style that still reads as poetic, crafting metaphors and spiritual inquires from such mundane tableaux while rendering the familiar as newly fantastical. “Kukkuripa” is named after a Buddhist madasiddha who resisted the temptations of paradise to live in poverty and care for his faithful dog, and in that act of self-denial Morris finds some inspiration for himself and some contentment in the everyday particulars of his existence, burned hand and all.

Morris has been writing and singing songs like “Kukkuripa” with Red River Dialect for eight years: gentle, thoughtful compositions that mix straight-forward observation with naturalistic imagery and philosophical inquiry. “I’m making a meal with what I have right here,” he sings on “Kukkuripa”, and that might be the band’s guiding principle. They make music with whatever and with whoever is at hand, which means they have been mutating almost constantly since their first album.

On 2010’s White Diamonds, Morris and guitarist Simon Drinkwater – then the group’s sole members – played lo-fi folk that recalled the old weird Americana of Bonnie “Prince” Billy, but subsequent albums mixed instrumentals with vocal-driven songs. As the band has grown from a duo into a sextet, Red River Dialect have carved out a more distinctive niche for themselves, rooted in trad English folk music but defined by their eccentricities; their 2015 album Tender Gold And Gentle Blue even incorporated tape loops and rustic drones.

Broken Stay Open Sky, their fourth, is both their most straightforward album and their most elusive. Gone are the instrumentals and interstitials; every song is bound to Morris’ lyrics and vocals. Also absent are any studio manipulations; every song sounds like it was recorded live in one take. It was inspired by what he describes as “waves of sad-joy” he experienced during a short English tour opening for Joan Shelley and Nathan Salsburg, which lent him new perspective on the loss of a friend. These songs manage to convey both extremes at once: there is melancholy in the celebration of “Juniper/The View” and something like delight in the muted eulogy “Campana”. Morris conveys these contradictions with a pronounced vibrato, a high quaver in his voice that at times recalls the ISB’s Robin Williamson, albeit much kindlier and less psych. His voice adds both a sense of delicacy and urgency to these songs and implies there is something enormous just beyond what he is showing you.

On first listen these songs might seem to ramble, as though set loose to find their own way. But they’re carefully and exactingly constructed to reflect Morris’ own thought process, to trace his journey from initial question to something like epiphany. To reinforce this thoughtful quality, the musicians concoct a folk sound that is crisp and elaborate, adorned with curlicues of fiddle and shimmering piano chords. On “Gull Rock”, Red River Dialect churn up a heavy, ominous sound, the blustery tension rooted in the interplay between Drinkwater’s guitar and Coral Kindred-Boothby’s bass. It’s a dark, at times claustrophobic arrangement, calibrated to match Morris’ most deeply politicised lyrics. The song finds him reaching out beyond his small, everyday scenes to glimpse the ugliness of the larger world. Yet, that’s what makes Broken Stay Open Sky so powerful: Red River Dialect locate the divine in the mundane. Or, as Morris sings on “Juniper/The View”, “I’m growing in the view now, the goodness of myself and others.”

Q&A
David Morris
What can you tell me about setting these songs to music?
Are you writing with these particular musicians in mind? I write the songs alone on guitar, and then I start playing them with the others. That is a huge moment, usually. The energy of that first jam is nearly always incredibly revealing. Each member of the band has a very deep and peculiar style of playing, which is a total gift to a songwriter like me who has few ideas beyond the chords and the rhythm and the words. It’s like floating a spark out into a six-dimensional field of fireworks, and I get to revel in the beautiful display that happens. They are my cosmic firework family.

How important is place to you?
Could you have written these particular songs anywhere else in the world? They arise from the sensations I have experienced in certain places, and the internal places I have found due to where I was in the world. I grew up in Cornwall and lived there until I was 27, and being Cornish sometimes figures in descriptions of our music, but I am not that interested in whether our music is called ‘Cornish’ or not. I don’t speak the Cornish language, but the landscapes of Cornwall speak to me, and will always do so.
INTERVIEW: STEPHEN DEUSNER