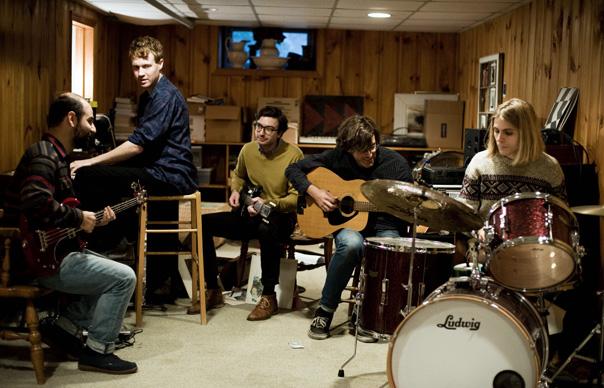 Back in the 1980s, there were plenty of attempts, not all of them complimentary, to name the indie-pop scene that emerged out of post-punk. One tag that stuck around for a while was “shambling”, crystallising the assumption that this was music made by wimps, for wimps; privileging a kind of low-fidelity incompetence to define itself against mainstream slickness. Real Estate, a Brooklyn quintet whose roots lie in the suburban sprawl of New Jersey, have spent the past few years making records that explicitly recall this era.

As their third album begins with a typically insouciant jangle, though, Martin Courtney’s band put the music they evidently love in a different context. Like The Feelies, there’s a rhythmic thrust that underpins even the most languorous passages. And like Felt, the serpentine paths taken by Courtney and fellow guitarist Matt Mondanile are rich, musicianly and far from amateurish.

The musical brilliance of Felt is often overlooked in favour of the aesthetic vision and marked eccentricities of their singer, Lawrence. Courtney, though, recalls one of Felt’s terrific guitarists, Maurice Deebank, in the way he adds filigree detailing to songs, while still sounding more nonchalant than florid. On “Primitive”, for instance, he anchors the song with something that’s closer to a melodic guitar solo than a riff, recalling Deebank’s mazy work on “The Day The Rain Came Down”.

Atlas is dominated by a saturated prettiness that seems at once virtuoso and effortless. The bright immediacy of “It’s Real”, from 2011’s Days, has been toned down, giving more room to Real Estate’s autumnal shades. If Days and 2009’s eponymous debut described a perpetual smalltown summer evening, plucked from memories of late adolescence, Atlas is fractionally more wistful. The cover art references a mural by the Polish artist Stefan Knapp, that adorned the side of Alexander’s department store in Paramus, New Jersey, near the childhood homes of Courtney, Mondanile and bassist Alex Bleeker.

Knapp’s mural – 200 feet long, 50 feet deep, once presumed to be the world’s biggest – is now in storage, the department store long demolished. The ten songs, correspondingly, are peppered with images of change, distance, separation and attendant anxieties. “Past Lives”, hitching Real Estate’s beatific melancholy to the faintest echo of bossa nova, is the key text here, beginning as it does, “I cannot come back to this neighbourhood/Without feeling my own age.” If it was once a place where the urban and rural merged into one another, now his old town has changed so that Courtney “can’t see the sky” any more.

The tune, though, is one of the band’s loveliest and most subtle, and it expedites this suburban romantic’s gently profound conclusion; that even in unpromising landscapes, beauty can still be located. “This is not the same place I used to know,” he notes, in a beguiling, fey tone that recalls Ian Brown at his most satisfyingly undemonstrative, “But it still has that same old sound/And even the lights on this yellow row/Are the same as when this was our town.”

Similarly, Real Estate’s music seems to be incrementally refined, never radically overhauled. A well-equipped studio – Wilco’s loft, in Chicago – doesn’t overwhelm their artisanal charm. A new keyboardist (Matt Kallman, formerly of Girls) provides a little extra depth, and comes to the fore on the instrumental “April’s Song” (a bobbling cousin of The New Seekers’ “I’d Like To Teach the World To Sing”, weirdly). In NME recently, Courtney described the discreetly swinging “The Bend” as having “this big bombastic classic rock outro that makes us feel like Black Sabbath.” Listeners, one suspects, are unlikely to interpret the mellow drop in pace as anything quite so disruptive (ten seconds of mildly distorted guitar at the end of “Crime” come as a bigger surprise).

Real Estate might have moved to the city and left New Jersey behind, but they remain reassuringly embedded in their old aesthetic realm. For all the talk of change, Atlas mostly feels as if time and life have been suspended, as the ten songs elide into a gorgeous 38-minute blur. What’s happened? Nothing much, ultimately, but it’s the exquisite attention lavished on the little things that matter. And so, at the very end, Atlas reveals its essence: “I have no idea,” Courtney observes, calmly, “where the day’s been.”
John Mulvey

Q&A
Martin Courtney
The lyrics of “Past Lives” in general seem especially significant.
That song sticks out as being the most backward-looking song on the album, but it’s written from a perspective rooted in the present. I wrote the music for that song in my parents’ attic, where I had a little studio set up for a while in the fall of 2012, before we got our own practice space in Brooklyn. The lyrics are inspired by sitting in the attic of the house I grew up in, recording demos in the middle of the afternoon, a month after I got married. Just feeling weird and old, I guess.

Can you tell us about the Stefan Knapp mural featured on the cover?
I used to see it all the time from the back seat of my parents’ car. The store itself was closed down and vacant for the entire time its existence overlapped with my own. The landscaping surrounding the building was all overgrown, and the parking lot crumbling, but this massive, colourful abstract painting remained.