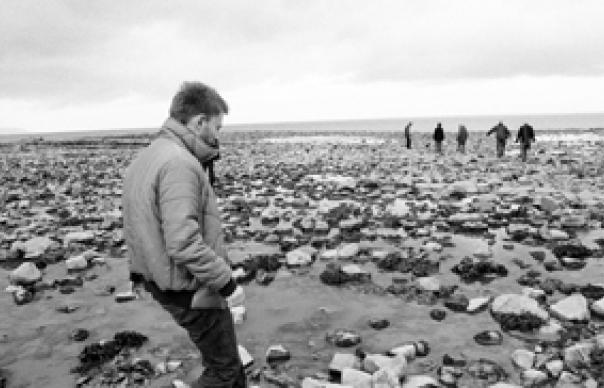 For their first release since the expiry of their contract with EMI, at a moment when they might have indulged their every splendid whim unconstrained by release schedules or media formats, there’s something beautifully perverse about the fact that Radiohead have made their most well-behaved, classically structured album since OK Computer.

You suspect they might have even planned this out of anti-corporate spite, stockpiling their most radio-friendly moments for the moment after that final contractual obligation. Maybe the diverse solo projects and soundtracks have simply refocused Thom Yorke and co as a band, but there’s only a smattering of the fragmented, apocalyptic electronica that has characterised the last three records – in its place an uneasy, organic calm.

After the skittish opening feint of “15 Steps” and the overdriven “Bodysnatchers, In Rainbows really settles into its groove with “Nude”, baleful, backward strings clearing like spent stormclouds to reveal a spare and eerie ballad. “Don’t get any big ideas” it warns, but the tender, if not sunny, mood is maintained across a beautiful suite of songs, from the scintillating guitars of “Weird Fishes/Arpeggi” across “All I Need” – a creepy, vampiric prowl of a love song – to “Faust Arp”. The presiding spirits of the record seem to be the blues of Peter Green, the strings of Robert Kirby, the elegant dread of Massive Attack, the electronic pastoral of Ultramarine and Talk Talk…

The heart of the album, though, is “House Of Cards”. It’s a gorgeous, flanged, oceanic ballad, midway between “Albatross” and “Song To The Siren”. “I don’t want to be your friend, I just want to be your lover” sings Yorke, remarkably, reclaiming that sweet ache of a voice you thought he’d abandoned forever to Chris Martin and his legion of Radio 2 heads. It’s a song about snatching at happiness, even if it means living in denial.

And of course he’s quick to play down the possibility – the closing track, “Videotape”, is a locked groove hymn that hysterically alludes to Faustian damnation. But by entertaining this merest glimpse of light in their customary shade, Radiohead seem to have found fresh purpose and life.


Check out Uncut’s Track By Track for In Rainbows HERE.