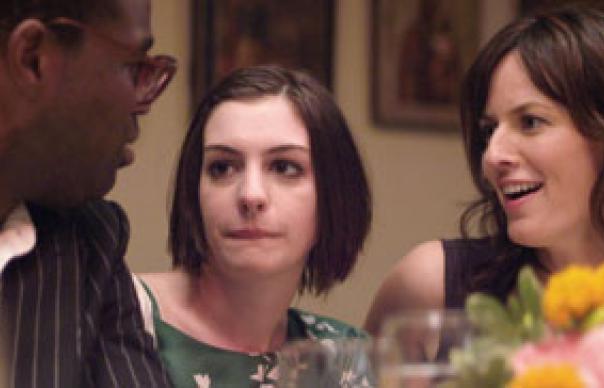 
Halfway through this rambling family drama, one sister announces she’s pregnant. “That’s so unfair!” squeals her sibling, all but stamping her foot and pulling her hair out. It’s a scene which sums up everything that’s interesting and infuriating about Demme’s very Altmanesque ensemble piece: the moment is unexpected, surprising. Yet it’s also self-indulgent, whiney and hard to like.

Hathaway gives an against-type turn as central figure Kym, leaving years of rehab to attend Rachel’s (DeWitt) nuptials. Kym’s the black sheep, which is signified by her chain-smoking, promiscuity and stream of acidic put-downs. Hathaway gives it her all but you feel she may have over-studied Ellen Page in Juno. Demme, meanwhile, appears to have watched A Wedding until he knows it backwards: quirky characters emerge then fade with no real momentum. Inevitably, dark buried secrets are slowly forced to the surface. Debra Winger cameos as the sisters’ estranged mother and oozes such effortless acting grace that everyone else seems to be straining.

Also dropping by are Roger Corman, Fab Five Freddy, Demme favourite Robyn Hitchcock and – as the husband to be – TV On The Radio’s Tunde Adebimpe. All of which suggests something cool and unconventional. At heart however, despite the juddering hand-held camerawork, this is well-trod dysfunction of the Ordinary People school.