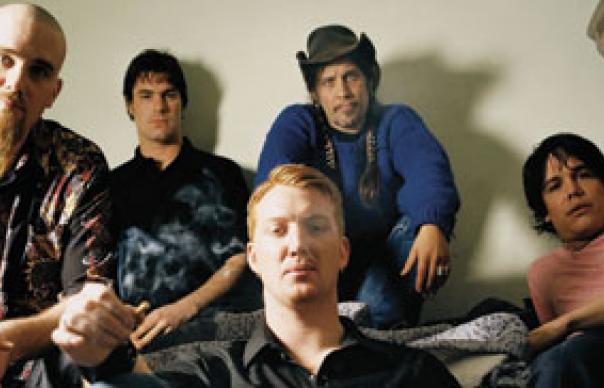 At times, sifting through a modern record collection, it can feel as if all roads lead eventually to Josh Homme. Entryist indie bands like the Arctic Monkeys employ him for extra rock muscle. Establishment figures of various generations – Dave Grohl and John Paul Jones, say, in Them Crooked Vultures – form bands with him, and end up being overwhelmed by his musical aesthetic. A historically difficult marginwalker like Mark Lanegan can be reinvented, through Homme’s intercessions, as a maverick voice-for-hire. Side projects, extended families, hairy myths proliferate. Homme’s ubiquity in 2010 would be remarkable even if his trademark sound was less distinctive; a blocky, progressive crunch that draws on Neu! and Devo as much as Sabbath and Zeppelin.

Ten years ago, however, many perceived Homme as one more Californian desert boy on the enjoyably parochial stoner rock scene. Homme, of course, had helped to define that scene in the ’90s as part of Kyuss, before the band disbanded and he marked time as an auxiliary guitarist with Lanegan’s Screaming Trees. The first, self-titled Queens Of The Stone Age album, a mix of psychedelic heavy rock and motorik rhythms, had been released in 1998, to only subcultural acclaim.

Homme, though, possessed hitherto disguised levels of ambition and resolve. In one of many subsequent Queens reshuffles, he brought in his old Kyuss bassist, an orc-like berserker called Nick Oliveri, scored a deal with Interscope, and began to reconfigure his music for the mainstream.

On its release in 2000, Rated R was already being fussed over in NME as “The best, most important rock album for years.” It did not, though, make Queens Of The Stone Age into the biggest band in America, as many had anticipated. Homme’s influence, it transpired, would be more covert and insidious: as the stern dictator of a musical cohort which everyone from PJ Harvey to ZZ Top would want to be associated with.

The work of a man who talked a lot about guilt-free excess, Rated R still comes across as incredibly disciplined. From the opening student boast of “Nicotine valium vicodin marijuana ecstacy and alcohol… Co-co-co-co-co-cocaine,” delivered in such an absurdly authoritarian tone, there’s a sense of hedonism given a new, military imperative.

Often on Rated R – and throughout his subsequent career – Homme sounds, in the best possible way, like a control freak. There’s an almost mathematical precision to the freak-outs like “Better Living Through Chemistry”. “The Lost Art Of Keeping A Secret” has the kind of groovy insouciance that’s usually reached by rigorous drilling. Even the ‘free jazz’ blowing at the end of “I Think I Lost My Headache” – clearly designed to produce one – is methodically orchestrated. Two songs from Oliveri, “Tension Head” and “Quick And To The Pointless”, are comparatively unhinged, gleeful punk tantrums played out at Motörhead speed. Even these, though, feel calculated; as if General Homme letting his sidekick go crazy was an integral part of the grand design.

As, no doubt, is the ongoing evolution of the live Queens. Judging by the Reading Festival show that features on CD2, the 2000 lineup was fractionally more ragged than those which followed: perhaps significantly, three linear, Tarmac-pounding jams from the debut (“Avon”, “Regular John” and “You Can’t Quit Me, Baby”) stand out. There are no unreleased tracks on this ‘deluxe’ reissue; two discs seem relatively parsimonious in the face of, say, the imminent 5CD expansion of Bowie’s Station To Station. A clutch of b-sides, though, flaunt rather iconoclastic influences for a hard rock band – covers of The Kinks and San Franciscan new wavers Romeo Void – and, in “You’re So Vague”, there’s a glimpse of the blasted, melodramatic terrain that Homme would visit, two years later, on the next and best Queens album, Songs For The Deaf.

Rated R now sounds oddly like a pop record, notwithstanding its finely tooled clanks, Lanegan and Rob Halford cameos and Oliveri screams. With hindsight it’s easy – perhaps too easy – to see Homme’s career as a series of fiendish manoeuvres. As part of that plan, Rated R sits as the relatively concise, punchy album that bought him commercial clout, and a licence to stretch out. An LA album, before he headed back into the Californian desert, an endless band of acolytes trailing in his dust.
John Mulvey