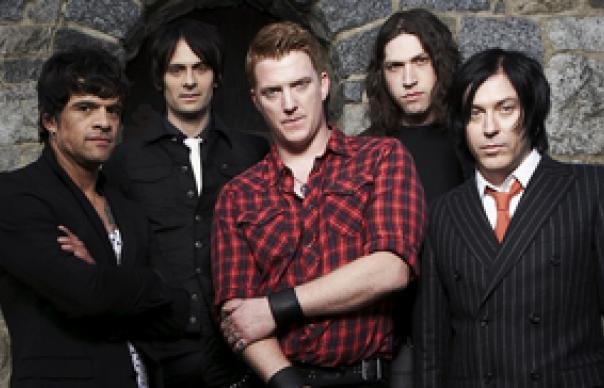 Halfway through their fifth album, Queens Of The Stone Age frontman Josh Homme nails what it is to be living in these times. Here everyone wants to party, and everyone wants to try everything. Some people might call it an age of decadence. Queens Of The Stone Age, meanwhile, have called it “Era Vulgaris” – and Josh Homme is the self-appointed spokesman for the generation.

This is a band, after all, who have made a virtue of trying everything. A heavy rock band whose personal mythology is built on songs like their excellent Feel Good Hit Of The Summer (essentially a list of drugs Homme had consumed), and whose music has encompassed jazz and polka, Queens are a group whose superb music is the product of enquiring, if hedonistic minds.

It’s a policy that has brought them great success (the triumphant Songs For The Deaf Album, anchored around contributions from then-singer Mark Lanegan), and personal upheaval (founder member Nick Oliveri was sacked for transgressing too far into unacceptable behaviour), but this flexible attitude towards nearly everything is maintained rigidly here.
Produced by long-time associate and godfather figure of Californian desert rock Chris Goss, there are textbook moments of monolithic rock music here – the hypnotic ‘Turning On The Screw’, the woozy ‘Suture Up Your Future’ and seduction slow jam ‘Make It Witchu’.

Perversely, though, Homme calls this a dance record – and Battery ‘Acid” and “Misfit Love” are both shot through with the band’s own noisy interpretation of the genre.
Whatever the sources they plunder, though, here Queens Of The Stone Age perform in the same way they have throughout their career: they continue to find some clever ways to do a pretty dumb thing. It’s true, our generation may occasionally be clouded by indecision, and have its palette jaded by too much choice. Era Vulgaris, though, is a demonstration in how originality can still find a way to shine through.