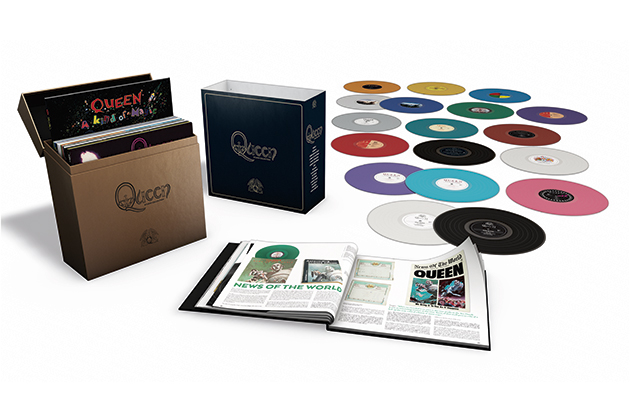 An illusion of unity was fostered by three formidable constants: Freddie Mercury’s inimitable voice, his preening persona, and Brian May’s layered guitar attack, a trinity which forever walked the tightrope between bombastic magnificence and delusional pomposity. Never fashionable and often critically derided, in their original form Queen achieved 20 years of commercial glory thanks to a savvy knack of absorbing contemporary trends while ensuring they were never far from the next killer 45.

The sheer quantity and ubiquity of hits have tended to overshadow the albums, a view not entirely discredited by this hefty boxset containing their entire studio output: all 15 albums remastered by Bob Ludwig from the original tapes and cut on 180g coloured vinyl (each album is also available individually on black vinyl).

The quality of the vinyl is superb, the packaging lavish – but what of the music? In their earliest incarnation, Queen were huffing blues-rockers enlivened by a proximity to glam. Queen and Queen II track their evolution from crunchy, riff-heavy rock (“Keep Yourself Alive”, “Seven Seas Of Rhye”) towards something closer to their signature sound: multiple stacked harmonies, layered guitar lines, rich melodies, stylistic promiscuity. Cohesive and atmospheric, Queen II is one of their best, featuring trippy folk (“Some Day One Day”), compelling hobgoblin silliness (“The March Of The Black Queen”) and an under-sung classic in “Father To Son”.

Their imperial phase – royal Queen, no less – kicks off with 1974’s Sheer Heart Attack. Stylish, self-assured and good fun, deep cuts like “In The Lap Of The Gods… Revisited” and “Stone Cold Crazy” hold their own alongside the louche “Killer Queen” and soaring “Now I’m Here”. A Night At The Opera delivers more of the same, just more excessively, expansively (and expensively). “Bohemian Rhapsody” is the marquee turn, “You’re My Best Friend” has second billing, while supporting highlights include May’s stirring folk broadside “’39” and Queen’s very own “Stairway To Heaven”, the eight-minute “Prophet’s Song”.

A Day At The Races consolidated their position as arena-rock behemoths, but the soft-bellied News Of The World suggested a weakening of sinew, while opening an album with “We Will Rock You” and “We Are The Champions” during the peak of punk was evidence of a band trapped in a bubble of its own self-regard.

Following the so-so Jazz – either winningly eclectic or directionless, depending on your tastes, but undeniably lifted by “Don’t Stop Me Now” – Queen began engaging with modern technology to explore electro-pop, disco and funk. On The Game, synths vie with May’s guitar, and the bass-heavy throb of “Another One Bites The Dust” co-exists relatively happily with the throwback rockabilly of “Crazy Little Thing Called Love”.

Quality control falls steeply from here. Flash Gordon, the soundtrack to Mike Hodges’ 1980 sci-fi film, is largely instrumental and only sporadically effective, and Hot Space is a dance-pop disaster, characterised by tinny drum machines, disintegrating band unity, and a host of not very good songs. The Works is stronger but still patchy, big singles “It’s A Hard Life”, “I Want To Break Free” and “Radio Ga Ga” papering over the filler.

Surfing a post-Live Aid resurgence, A Kind Of Magic is the unofficial soundtrack (six songs feature in the movie) to Highlander, a fantasy film almost as silly as the band. The uber-’80s cover graphics, the synthetic stomp of “One Vision” and ethereal stodge of “Who Wants To Live Forever” present a sleek précis of Queen’s latter-day aesthetic, striking a balance between their rock roots and newfound pop gloss.

Recorded and released following Mercury’s AIDS diagnosis in 1987, The Miracle and Innuendo feel more unified and, at times, pack a surprising punch. “The Miracle” and “Was It All Worth It” re-connect with the old pomp, while “These Are The Days Of Our Lives” and “The Show Must Go On” mine Mercury’s rapidly failing health for maximum melodrama, although his trademark chutzpah is evident on the otherwise execrable “I’m Going Slightly Mad”. By the time of Made In Heaven in 1995, on which embryonic recordings made by the singer in the last months of his life were completed by his bandmates, Mercury was four years dead and Queen as a creative entity were finished.

Boxed up handsomely and never sounding better, Queen’s oeuvre, hit and miss though it is, assumes more depth and substance here than is often credited, while in Queen II and A Night At The Opera they have at least two complete albums which stand the test of time.