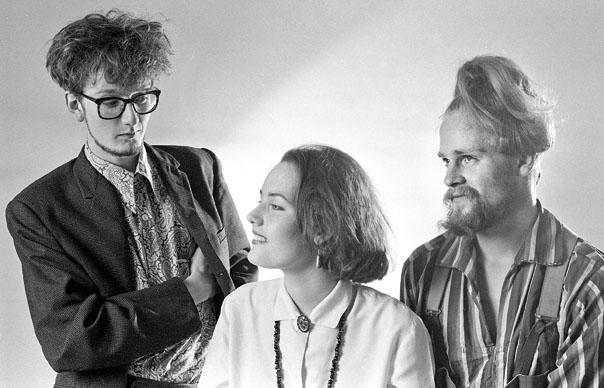 Some bands, as John Peel said of The Smiths, ‘spring fully-armed as if from nowhere’, while others take longer to find their feet. Pulp are the headline act for the latter category. Before the breakthrough “Babies” in 1992, Pulp slowly felt their way into music with three albums in the 1980s – It, Freaks and Separations –all of which have been reissued on Fire Records. It is impossible – and pointless – to listen to any of them without cocking half an ear towards the future, and comparing the tentative 1980s Pulp with the triumphant force that would blossom in the 1990s.

Pulp had already been around for five years when It came out on Red Rhino in 1983. The ‘schoolboy Pulp’ had split by the time Simon Hinkler (later of The Mission) persuaded 19-year-old Jarvis Cocker to go into the studio with a pick-up band. It begins, unsettlingly, with the sound of seagulls and the album, co-written by Cocker and Hinkler, is out-of-kilter with the post-punk mood, soft and acoustic, heavily influenced by Leonard Cohen, even if Cocker’s vocals are disturbingly reminiscent of Morrissey. His needy crooning on the flute-ridden “Wishful Thinking” is very different to what was to come, and on much of the album there’s a curious tension between the knowledge that Cocker is trying too hard, while also holding something back. This is broken in places, such as the romp of “Love Love”, sung with a lusty wink rather than a teenage eagerness to please. It’s bizarre jazz-pop, LSD-meets-music hall, but it’s definitely Pulp. As is one of the bonus tracks, an alternative mix of “Blue Girls”, with organ swirling and tempo raised accordingly, offering a tantalising glimpse of the ghost of Pulp’s future. But that is still half a lifetime away.

By the time Freaks came out in 1987, Pulp were refreshed, Cocker having been persuaded to stick with music by the addition of Russell Senior and Candida Doyle. Senior’s influence is crucial, taking lead vocals in the manic “Fairground”, a gurning celebration of the grand guignol. This is the sound of a band coming together, Doyle’s organ transforming the mood, while the lyrical themes have got darker, smarter, Pulp-ier. “I Want You” is one of the few 80s songs the band still perform, while “Being Followed Home” is paranoid and queasy, an evil sibling to future suburban classic “David’s Last Summer“.

Freaks is a break-up album, though, and consequently as depressing as anything they would record until This Is Hardcore. On the morose triptych “Master of The Universe”, “Life Must Be So Wonderful” and “There’s No Emotion” the bonkers promise of the first few tracks gets lost amid self-pity and solipsism. But ultimately it’s the simplicity of “Don’t You Know”, that foretells the future: no histrionics, just a catchy tune and witty lyric. This is the skeleton of all future Pulp hits – only the tunes would get catchier and the lyrics wittier: a bonus disc of Freaks-era singles – including the superb “Little Girl (With Blue Eyes)” – confirms the direction they were moving in.

“Give me the city…” is the telling opening line on “Love Is Blind”, the first track of Separations, released in 1992 but recorded in 1989 after Cocker had moved south and allowed London to expand his mind. This is the first ‘real’ Pulp album, with Steve Mackey and Nick Banks on board, and Mackey’s love of acid house proves to be the missing ingredient. The first side is decent but humdrum – the punchy but forgettable “Don’t You Want Me Anymore?” is typical –recognisably a Pulp album, just not a particularly good one. Things pick up on side two, with the acid influence driving “My Legendary Girlfriend”, “Death II” and “Countdown” close to pop perfection. Cocker confidently gasps, oohs and leers over trademark beats of fleapit disco, lapsing into conspiratorial spoken word when the mood demands and mining his past for inspiration – the key first sentence of “Countdown” is “Oh I was seventeen…”. Pulp, looking back with panache, have finally arrived.
Peter Watts

Q&A
Simon Hinkler
How did you get involved with Pulp?
I was in a band called Artery and the early Pulp supported us. I got friendly with Jarvis and started going out with his sister. Jarvis and I were playing music around the house and I persuaded him to make an album. We wanted do something laidback and introspective. Jarvis was in his late teens and his lyrics were very angsty, and we wanted to reflect that. I was into Leonard Cohen and we both liked Velvet Underground, and wanted something stripped down and simple. We split up, but I continued to produce the EPs around the time of Freaks.

Did you expect them to be as big as they became?
Jarvis was immature but had something about him. He was the smartest kid in school, but for a long time he was his own worst enemy. He wouldn’t compromise. When he moved to London I persuaded my girlfriend at the time to see Pulp, and she offered to manage them. She made them do things properly and persuaded people to see them, and got them signed to Island. They had the attention they’d needed for years, all they had to do now was let Jarvis carry on being Jarvis.
Interview: Peter Watts