Public Enemy – It Takes A Nation Of Millions… 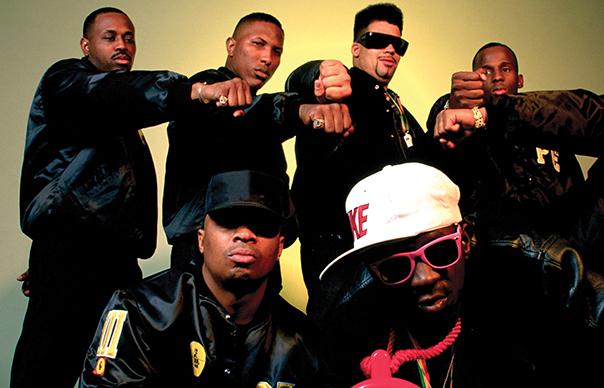 It’s received wisdom now, but in the late ‘80s, when things weren’t quite so clear-cut it felt revolutionary to declare that Public Enemy were the “greatest rock’n’roll band in the world”. If the comment, often spilling from the pens of earnest music-crit types, feels like the kind of hype PE were urging us to disregard, drilling further down into Public Enemy’s history, motives and influences reveals its wisdom. Producer Hank Shocklee set his sights on rock’s energy and mid-frequency range, and created a noise to reflect the chaotic nature of the times.

With It Takes A Nation Of Millions To Hold Us Back, Fear Of A Black Planet, and indeed their precursor, 1987’s Yo! Bum Rush The Show, Public Enemy managed the near-impossible: music that convincingly, articulately, held a mirror up to its multi-faceted, complex, media-saturated times, speaking with equal measures of righteous fury and retribution. Shocklee and leader Chuck D came up and met through studying at Adelphi University – Chuck D earned a degree in graphic design – but they were also involved in New York’s hip-hop underground: an early effort from Chuck D, the Shocklee brothers and Eric Sadler, Spectrum City’s “Lies”, led Rick Rubin – whose label, Def Jam, is celebrating its 30th anniversary, hence these reissues – to headhunt Chuck D, desperate to sign him to his label.

With the benefit of rewritten history, early Public Enemy comes across as invincible, inevitable – and yet, their debut album, Yo! Bum Rush The Show, for all its daring and innovation, only sold 300,000 copies in its year of release. Perhaps the production’s deceptive minimalism, pulsing noise, threaded together to create The Bomb Squad’s “sonic walls”, was a too distilled for broader consumption. Yet this approach to production would become Public Enemy’s sonic imprimatur, something they’d ramp up on subsequent albums.

Indeed, listening back to It Takes A Nation Of Millions To Hold Us Back and Fear Of A Black Planet, the eloquence of the production still startles. The Bomb Squad’s manipulation of noise is a process of alchemy, transmuting base elements through careful distillation and arrangement. This also echoes the intensification of the mass media-scape that Public Enemy both reflected and were part of. Before Public Enemy, Chuck D was a radio broadcaster, presenting the Spectrum City Radio Hour on university station WBAU, and Public Enemy’s albums come across as deftly woven broadcasts, using samples as earworms, pulled together with a jump-cut logic that suggests musique concrète just as much as it does the magpie aesthetic of hip-hop. Not unreasonably did Chuck D claim that rap was “black America’s CNN”.

Feeding into this was Chuck D and the group’s canny reading of the political turmoil of the time, and their ability to historicise this political awareness. As Shocklee says, “There was so much going on with the black community, a lot of tension, racial tension was happening amongst the races at that time, and crack had devastated our community… [So] that was a big part of it, to give black people a sense of hope, a sense of pride, a sense of the fact that we can get through, and we can become greater than what we’re being programmed to be.” This understanding of the complexity of race relations in the United States was further cross-wired with an in-depth reading of histories of black criticism, leadership and activism, from the Black Panther Party and Black Nationalist Marcus Garvey, through to the Nation Of Islam organisation and its leader, Louis Farrakhan.

It Takes A Nation Of Millions To Hold Us Back is in many ways the defining moment for Public Enemy, often considered their classic set, and the one that brought them their first taste of wider success. In truth it lacks some of the pure shock factor of Yo! Bum Rush The Show, and the concept of a one-hour album, no breaks, thirty minutes each side, which plays out with the heavyweight implications of Marvin Gaye’s What’s Goin’ On, doesn’t always convince. But these are minor criticisms, and Millions has a number of PE classics in its armoury, and if anyone needs convincing that Public Enemy rocked harder than 99% of rock music of its time, just turn to the breathtaking “She Watch Channel Zero”, whose scaffold is built from Slayer‘s “Angel Of Death”.

Elsewhere, “Black Steel In The Hour Of Chaos”, later queered by Tricky, is stentorian and unrelenting, while “Bring The Noise” is all sparking noise, a magnesium flare of a track. Throughout, Chuck D fine-tunes his vocal delivery: drawing from a rich black oratory tradition, it’s a voice that has the same wall-shaking authority as Prince Far I. But if the reality of Millions, at times, is overshadowed by its legend, there are no such problems for Fear Of A Black Planet, which is even more tightly constructed. It allows Flavor Flav to come into his own, particularly on “911 Is A Joke”, has the group playing at a heightened pitch on classics like “Brothers Gonna Work It Out” and “Burn Hollywood Burn”, and features their most thrilling five minutes, with the panic rush drone – almost Wild Pitch in its powers – of “Welcome To The Terrordome”.

Closing down the first, wildest phase of Public Enemy’s career, Fear Of A Black Planet was a peerless summary both of the possibilities of hip-hop, and of the conflicts and intensities that the group manifested through their music. Reflecting on Public Enemy in their prime, music critic Simon Reynolds once wrote that they “did what no rock band… could: not just comment on, but connect with real issues and real stakes in the outside world: aggravating the contradictions and making the wounds rawer and harder to ignore.” It’s hard to disagree with such an observation: but just as much, Public Enemy were the weapon salve, the powder of sympathy applied to the powers that created the wound.
EXTRAS: Each album comes with an extra disc of contemporaneous remixes, b-sides, etc. 8/10
Jon Dale

Q&A
HANK SHOCKLEE
What can you tell me about the pre-Public Enemy days – your time with Chuck D at Adelphi University, for example…
I had a DJ outfit called Spectrum City, and I was DJing for years. I ran across Chuck when I was throwing one of my events. He was interested in doing design work for the flyers. From that point we developed a relationship, at least from a friendship perspective. I didn’t ask him to join my crew until later. [Eventually,] I wanted to add an MC component to my DJ crew, so I was on the hunt for MCs. I went to Adelphi University, and they’d have these parties late at night. These parties were a magnet for attracting a lot of wannabe MCs, because at the time, that was the only place you could go where you could grab the mic. There was a whole herd of people who was trying to show their skills. I heard a lot of MCs who weren’t really all that good, but then I heard this guy grab the mic and make an announcement for an upcoming party that was happening. He wasn’t MCing or anything. I just heard his voice, and fell in love with his voice. I approached him to be part of my DJ outfit. It took me two years to convince him!

Chuck was a graphic design major at Adelphi, which makes sense given the visual impact and importance of presentation for Public Enemy.
Chuck and I did the Public Enemy logo. I did the letters, Chuck did the logo… Originally there were two separate group logos that we made, one was Funky Frank & The Street Force, one was Public Enemy. Public Enemy had a different logo, and Funky Frank & The Street Force had the target. So Chuck said, “You know what? I’m gonna take this target, because it works better, and put it with Public Enemy.” So Public Enemy came from the concept first, before it became anything else. At the time, there was a black consensus that hip-hop was being targeted, by mainstream America, mainstream radio, mainstream press. It was being targeted by the musicians, who said that it really wasn’t music, it was a bunch of kids sampling and stealing beats, the chord structures were wrong, the fact that there were no melodies was wrong. Everything was wrong about rap. There was this big thing about rap not lasting, “It’s a fad, it’s gonna die out”.

The Bomb Squad called their production style “organised noise”.
I started working with Eric [Sadler] first, and I started coming up with sound design concepts, ideas for a sound. I brought Eric up because he was a musician. He could play a little guitar, a little drums. I needed somebody that had an understanding of chord structure, musical scales, because I had ideas of sound. Since I had a library of over 10,000 records, I started experimenting with creating ideas and tracks, because the records that I had gave me the knowledge of understanding a lot about intros, breakdowns, turnarounds. I ripped records apart in terms of how they build up their arrangement structures, what is the most exciting part of the record… I wanted to take this rap thing and push it. I wanted to push it almost to the point where you keep the pressure on it – kind of like if you look at something being pressed against glass: I wanted to create a sonic signature that represents something being so pressurised that it’s being pushed up against the glass, and has no room. I didn’t want too much relief – I wanted all tension.

How did you feel about Public Enemy being called the ‘greatest rock’n’roll band in the world’? Because you drew inspiration from rock’n’roll for your production…
Nobody could sound like Public Enemy, because it doesn’t sound like a dance group. It comes from my rock’n’roll background. I didn’t want to produce rock’n’roll that had guitars in it, because that would be clichéd. I wanted to create the same kind of intensity, going back to the pressure – because that’s what rock does, rock is real compressed, and the pressure is constant. I wanted to speak that language with other instruments.
There are two things that Public Enemy was patterned after, there were two main groups I loved the most. One was Iron Maiden, and the other was Megadeth. The reason why is because those two particular groups, every record that they put out was a continuation of the last. So they created, in my mind, sequels. Every record, to me, has to have a sequel event. So, Yo! Bum Rush The Show, the sequel to that would be, It Takes A Nation Of Millions To Hold Us Back. After we bum rush the door, it’s gonna take a nation of millions to hold us back. Now that we’re taking over the spot, now it’s Fear Of A Black Planet, now we’ve taken it over.