PJ Harvey & John Parish – A Woman A Man Walked By 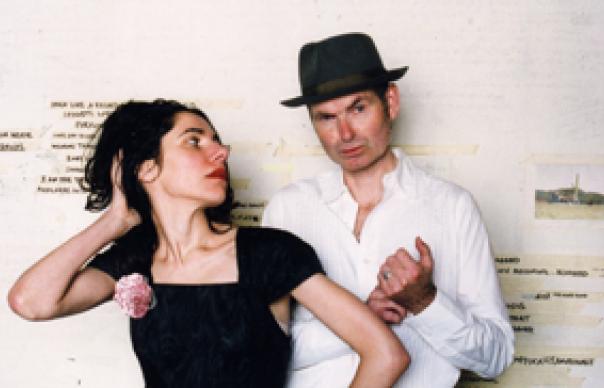 John Parish’s 1980s group, Automatic Dlamini, was – if my beer-fogged memory of seeing them at a Bristol outdoor festival serves – a spiky hybrid of Beefheart, Shriekback and Test Department. A couple of years afterwards, the teenaged Polly Harvey volunteered to join the group, which eventually led to her jumpstarting her own solo career. And Havey and Parish have kept up a special relationship ever since.

Harvey’s moves since her electrifying debut, Dry, are well known. Parish’s three solo albums have exerted a more subterranean effect, but like Tim Friese-Greene or Flood (who also mixed this release), he’s a catalytic producer who’s not averse to unveiling his own music at random intervals. Parish produced Harvey’s 2007 album, White Chalk, encouraging her to drift free of the guitar and concentrate her songwriting around the piano and other atmospherics. Now, nearly 13 years after their Dance Hall At Louse Point collaboration, the former bandmates have reunited for a highly satisfying hotchpotch of tracks.

The division of labour is clear: Harvey ransacks her copious notebooks for lyrics, while Parish constructs a selection of diverse musical frameworks. Many of Parish’s arrangements still retain the abrasiveness of the Automatic Dlamini days. The Pavement-ish chug of their opening gambit, “Black Hearted Love”, could wake up the sleepiest of stadium audiences. But the next track, “Sixteen, Fifteen, Fourteen”, displays a folkier edge with a droning banjo reminiscent of the pummelling acoustic cuts on Led Zeppelin’s third and fourth LPs. The sparse backing for “The Soldier” is equally impressive: gently ticking banjo, airy harmonium notes, and Harvey’s meek croon punctuated by judicious stabs of piano. “The Chair” glides on an air cushion of ambient dub bass, Krautrock drums and Richard Lloyd-style electric guitar. Flutey recorders and wobbling Wurlitzers periodically turn up unannounced.

Impressive though these earthy arrangements are, there’s an even greater pleasure to be taken from Harvey’s singing. In the company of her old colleague and confidant, she abandons herself to a diverse collection of vocal personae. On “April”, her glottal, nicotine-rough delivery appears to be a homage to that other West Country vocal stylist, Portishead’s Beth Gibbons. For the adolescent hide-and-seek scenario of “Sixteen, Fifteen, Fourteen”, she regresses to a breathless Celtic bawl. “Pig Will Not”, yelled through a megaphone, is built on her cacophonous howls of refusal – “I will not!” – over Parish’s threshing drums.

Her best turn of all comes in “A Woman A Man Walked By”, and the tirade of gleeful insults hurled at some grotesque, balding hermaphrodite. With rumbustious vitality, and in an accent located midway between Devon and Dublin, Harvey witheringly dismisses this imaginary mutant’s “chicken liver balls” and “lily-livered little parts”. It’s her most hilariously hammy performance to date. That song, which segues into an instrumental shuffle mystifyingly subtitled “The Crow Knows Where All The Little Children Go”, falls into the same catchment area as Grinderman, the side project of Harvey’s erstwhile squire, Nick Cave: aggro-grunge that can still laugh at its own abysmal anger management.

It’s testament to Harvey’s current emotional range that she can complement these almost camp hatebombs with some plaintive heartbreakers, too. “The Chair” is the lament of a bereaved mother whose heart has been skipping beats since the drowning of her son, and Parish supplies juddering cardiac rhythms to match. In “The Soldier”, she recounts a dream about stepping on the faces of women and people she’s left behind and pleads, “Send me home damaged and wanting”. Whether it’s Harvey’s own dream, or an attempt to inhabit the mind of a war veteran, remains ambiguous. There are deaths here, too: of a love affair in “Passionless, Pointless”; of a love affair with the West Coast in “Leaving California”; and in the funeral parlour of “Cracks In The Canvas”, where Harvey intently studies the myriad lines of an oil painting as they transform into a boundless road map leading the way to a more hopeful future.

Together, Parish and Harvey sound confidently experimental, like two soldiers daring each other to ever more stupendous feats of bravery. Here’s hoping this exploration continues to feed back into the work she produces under her own name, and that Parish gets his dues as one of Britain’s most resourceful and imaginative studio craftsmen.