PIRATES OF THE CARIBBEAN – ON STRANGER TIDES

Sail on, sailor. Johnny Depp and co hit the waters once again. Now in 3D! 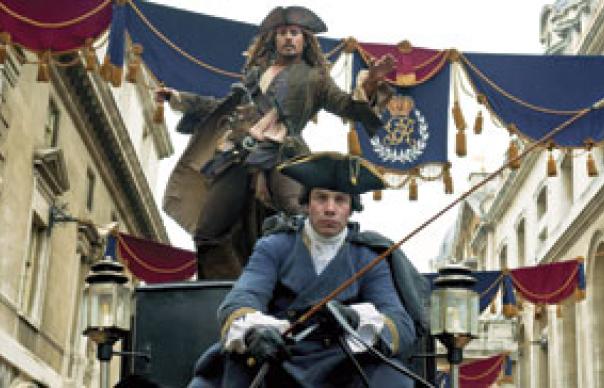 Since Avatar broke every box office record going, 3D has swiftly and predictably become the norm for any random blockbuster. But no amount of groovy technology can stop a film being a load of toss, right? Only wily old Werner Herzog, in his marvellous Cave Of Forgotten Dreams, has understood that 3D can be used in ways other than to disguise a paucity of genuinely thrilling creative ideas.

But wait! For those of you who’ve glazed over at the thought of seeing this week’s favoured costumed crusader busting out of your cinema screens in three action-packed dimensions – there is this. We are in England, and it is 1718. For around 15 minutes, we find ourselves plonked in the Hanoverian court of King George II – in 3D! It’s a moment of strange and incongruous brilliance – look! Richard Griffiths as George II, waddling around St James’ Palace, right there in 3D!

Surely, this is what Michael Gove means when he says he wants to incentivise deeper knowledge of our cultural heritage among school children?

In fact, this opening sequence is by far the most engaging thing in an otherwise tiresome and noisy picture, watching Johnny Depp, Geoffrey Rush and Richard Griffiths, three intelligent and fine actors, bantering and playing off each other.

Sadly, such moments are few and far between. Although incoming director Rob Marshall attempts to inject a frothier tone after the incomprehensible plotting of the two previous instalments, On Stranger Tides’ default setting is still loud, going on bang. There are zombies, mermaids, pirates, the Spanish navy, the English navy, Bluebeard, his daughter Angelica and the search for the Fountain of Eternal Youth all clamouring for your attention. As befitting a $3 billion franchise that’s spun off from a theme park ride, the emphasis here is on splash and spectacle.

Odd moments, though, do filter through the roiling bluster and effects-driven hurly burly. A meeting in a pub between Depp’s Captain Jack Sparrow and his father, Captain Teague, played one again by Keith Richards, is amusing enough: “Does this face look like it’s been to the Fountain of Youth?” Asks Richards. “Depends on the lighting,” deadpans Depp.

We’re now so used to Depp’s lop-sided Sparrow that, to some extent, he feels like more than part of the scenery here. Far better, in fact, is Geoffrey Rush’s Captain Barbossa, who’s exchanged his pirating days for life as a privateer, working for George II’s navy. Dressed in powder and wig and doing his best “Lah-di-dah” posh voice, he gets many of the best lines, and plays them well. Ian McShane, an unearthly shade of orange, struggles to make Bluebeard more than a PG version of Deadwood’s Al Swearengen. Penelope Cruz, as Angelica, who – of course – was once involved with Jack Sparrow, does feisty and Spanish, pretty much as you’d expect she would.

It’s alright. But you could probably have more fun with a Pirates Of The Caribbean Lego set.
MICHAEL BONNER