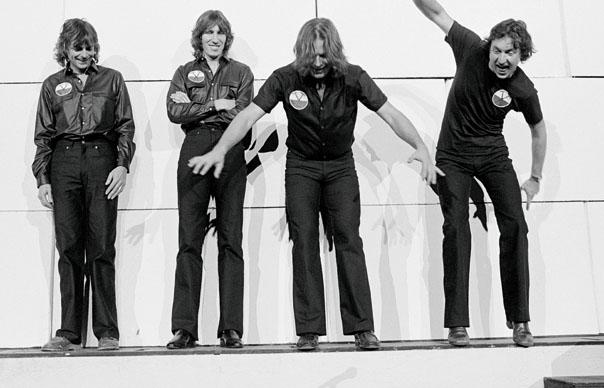 “Roger having a bit of a whinge.” That’s how David Gilmour, in a moment of devastating offhandedness, described The Wall. The 1979 double album, a personal obsession for Waters, concerned the meltdown of an English rock star damaged by childhood trauma: his father’s wartime death, his mother’s creepy overprotectiveness, his miserable schooldays. Spawning a worldwide No 1 single (“Another Brick In The Wall (Part 2)”) and a movie, the project took a heavy toll. One band-member was sacked (Rick Wright) and two others (Waters and Gilmour) embarked on a 25-year feud.

The Wall, of course, was not afraid to lose friends and alienate people. That was, if anything, its field of expertise. It was a chanting, ranting, screaming, gruelling journey into hysteria and catatonia, with only the odd ballad and Gilmour’s guitar solos for comfort breaks. Some it was shockingly un-Floydian; as well as an orchestra and three choirs, Waters and co-producer Bob Ezrin hired a number of American session musicians. Glutted with speech and sound effects, if The Wall had precedents, they were not Animals or Wish You Were Here but Lou Reed’s harrowing Berlin and Alice Cooper’s Welcome To My Nightmare – both of them Ezrin productions. But The Wall went further. It beat its protagonist (Pink) to a pulp, refusing to stop until Waters, man of a thousand accents, donned the robes of a judge presiding over Pink’s fate in an emotionally charged courtroom of the superego. Roger, in other words, was having a bit more than a whinge.

EMI’s “Why Pink Floyd?” reissue campaign, which has been running since last September, has dismantled one or two bricks in the band’s implacable wall by making available outtakes and other unreleased material. This new 7CD/DVD ‘Immersion’ edition of The Wall includes two discs of demos from their archives – 64 tracks, to be precise, 26 of which were part of the original work-in-progress that Waters played to the group. This is an edited highlights package rather than the complete match: all but three songs are in the form of excerpts (some as brief as ten seconds), all of them crossfaded into a continuous sequence. The detail in the sketches is surprising. Waters pretty much has the story worked out, from World War II to Pink’s trial, and the music features synthesisers, fuzzy lead guitar lines and a dark, disembodied ambience reminiscent of Bill Laswell’s remixes of Miles Davis. Echoey fragments of familiar songs (“Empty Spaces”, “Goodbye Blue Sky”) fly past leaving only impressions of their shape. It’s a digest of The Wall for the modern consumer in a hurry. Pink is “sitting in a bunker here behind my wall” (“Waiting For The Worms”) after only 11 minutes, and gets his schooldays out of the way before we’ve time to unpack our pencils. But as Waters adds each piece to the jigsaw, you can see why the rest of Floyd were intrigued. There’s something grimly inexorable about his narrative, like a work that has to be made whatever the cost.

Like The Beatles’ White Album, there’s a theory that The Wall would have worked better as a single LP. The brilliance of Gilmour (“Comfortably Numb”, “Run Like Hell”) would have counterbalanced the morbid self-pity of Waters. The trial would have gone, the hotel-room longueurs would have been scaled back, and the mother would have been a battleaxe but not a bore. The theory makes The Wall more palatable on paper, but the problem is it wouldn’t have been The Wall. Logic dictates that Pink’s deterioration into a blob of sociopathic nothingness should last for 80 arduous minutes, otherwise why is he so unhappy in the first place? On a smaller canvas, The Wall might have been just another allusion to Syd, another “threatened by shadows at night”, a rehab rehash. Waters was correct to dream large. It had to be an epic. Where he and Ezrin went wrong was to assume that every scene in an epic – the flashbacks, the soliloquies, the crowd shots – must be taken to excess. Thus did The Wall become a cartoon even before Gerald Scarfe turned it into one.

This explains why Floyd’s ‘band’ demos, which account for over 100 minutes of music on the boxset, do a lot more than just bring guitars, drums and definition to Waters’ one-man outlines. They allow us to hear what The Wall could have sounded like without Ezrin and without such a megalomaniacal Waters. It could have been a rock album – and a decent one at that. The Englishness, the poignancy, the taut riffing (“Young Lust”) would have been on a par with “Time” and “Have A Cigar”, without all the derangement of smashed televisions and horrendous groupies. But it wouldn’t have been The Wall without that derangement, and so these Floyd demos are a mere pathway, an indication of what happened before the madness. “The Doctor” (which became “Comfortably Numb”) has Waters singing the vocal while Mason (I think) does a sit-down-old chap comedy routine as the family quack. Not a great idea. They drop it for the next version, designating Gilmour as lead singer, but again it’s not right. There are no guitar solos, no crescendos, no deliciously woozy transfers from doctor to patient.

The demos are undoubtedly this boxset’s main attraction. A new remaster of a live album is included (Is There Anybody Out There? The Wall Live 1980-81), but Floyd fanatics online are declaring themselves disgruntled with the lack of high-resolution 5.1 or Blu-ray, unlike Immersion sets for The Dark Side Of The Moon and Wish You Were Here. Remember, though, how The Wall began: as a mouthful of Waters’ phlegm in the face of a fan in Montreal. How did audiences become so insatiable for that idea? Masochism? Waters still performs it today, his mega-grossing tour scheduled to hit South America at Easter. “So ya thought ya might like to go to the show,” his opening song will begin, dripping with derision, and South America will lap it up.
David Cavanagh