Pentangle – The Time Has Come 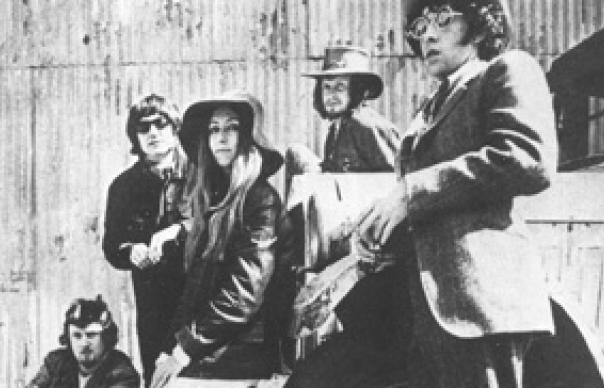 On paper, the formula looked impeccable. Take London’s two most dextrous folk-blues guitarists, toss in a jazz double bassist and drummer, then summon a young blues singer looking to extend her reach. At the end of 1966 the spell was cast and the five points of the magickal star were staked out to describe The Pentangle, Britain’s first folk-jazz-blues supergroup: Bert Jansch, John Renbourn, Danny Thompson, Terry Cox and Jacqui McShee.

Compiled by Jansch biographer Colin Harper, The Time Has Come is a digest of rare or unheard studio and live takes, TV spots, soundtrack work, plus selected album tracks and singles, spanning four discs and five years. It’s an impressive overview of the group’s best years (up to 1973 when they split), if occasionally frayed at the edges: the group themselves are bemused that anyone would want to hear their ‘unofficial’ side.
Emerging from the London scene, Pentangle were less pastorally inflected than many folk-rock relatives. They didn’t rock as hard as Fairport Convention, weren’t as stolidly rooted in loamy folk tradition as Steeleye Span, nor as warbly and wyrd as The Incredible String Band. They were hardly shy or retiring types like Nick Drake, either – certain members partook liberally of ‘hospitality’. Jazz and the ‘60s folk-blues revival were the teachers that had nurtured Jansch and Renbourn, and the light snap and twang of Cox and Thompson’s rhythm section kept the music aerated but never fluffy.

Pentangle also achieved a prominence none of the above managed in their lifetimes. Their song “Light Flight” was chosen as theme for the BBC sitcom Take Three Girls, which propelled the group into a nation’s humming consciousness. Included here in original and live versions, its bustly jingle remains their most teethgrinding moment.
When this box begins, they have already been playing regularly all summer at the Horseshoe Hotel on Tottenham Court Road, honing a repertoire largely based on folk standards, but with a couple of self-penned instrumentals. They sound ropey: on “Poison”, from the never released first session from August ‘67, McShee is off-key, fighting for notes. Six months later, feisty New York manager Jo Lustig has tightened them up and begun securing TV and radio appearances. Before the end of 1968, they are filling the Royal Festival Hall on their own.

The group are in their element flying through their “Waltz”, from the debut Pentangle, or the complex traceries of the newly released “Koran” and their signature song “Pentangling”, an improv ripe for embroidery. The brutal world depicted in Britain’s ancient ballads wasn’t so far from Jansch’s heroin dirge “The Needle Of Death”, and in their choice of folk covers Pentangle usually plumped for the more murderous end of the traditional ballad scale: brides with pistols like “Sovay” (played on TOTP) or the much interpreted tale of curse and metamorphosis, “Tam Lin” (recorded for the Ava Gardner movie The Devil’s Widow in 1970).

Many of these tracks typify the way most British folk reaches its most exciting peaks at the moment it becomes electrified – Neil Young recently remarked that Jansch did for the acoustic what Hendrix did for the Stratocaster. “Green Willow”, one of several tracks from a lost session recently rediscovered in an attic, is a curious mix of synth bass, ‘singing’ jazz flute and glam rock-flutter-echoing drums. The instrumental edit of “Jack Orion” is a mirror of Tim Buckley’s contemporaneous Happy Sad, with vibes and drumless acoustic/electric scudding into view.
The tempo-shuffling blues “Helping Hand”, from Reflection (1971), is textured by Renbourn’s gorgeous, silken lead line spun from wah wah and volume pedal. “The Snows” from Solomon’s Seal (1972) is tempered by a sitar vapour trail. The Pentangle sound always just steered clear of the obvious signifiers and trappings of psychedelic rock/blues crossover. If at times the songs come off a little too flibbertigibbety for contemporary tastes, at its peaks Pentangle touched on something far more mercurial and elfin, deeply embedded in British music lore.

By 1970 relations were becoming fractious. Jansch in particular seemed privately tormented by the way the group requirements diluted his formidable technique. The fourth album Cruel Sister flopped in late 1970; a failure to capitalise on the previous success that had helped them cross over (they were known for a certain unwillingness to tackle intra-band problems head-on.) Perhaps for the same reason, some of their earlier studio albums sound claustrophobic and stiff, as though they didn’t enjoy the palaver of rendering the tunes in the unforgiving light of the mic and desk. Reflection (1971) was the only time they used 16 tracks, and the space around them helps the music no end.

It’s on the live recordings of disc three – an almost-complete reconstruction of the Royal Festival Hall concert that was cherrypicked for the live half of 1968’s live/studio double Sweet Child – that the solid air of their studio work liquefies and steams into the ether. More swinging tunes like “Hear My Call” and “I’ve Got A Feeling” are essentially derivations from Miles Davis’s “All Blues”, but their jazz impulse came more impressively to the fore in the last two years, 1971–72. A version of “Pentangling” is thrown in from a Norwegian TV slot the same year, with a marvellously confident Thompson bass solo.

Disc four is a ragbag of live appearances culled from television and two tired-sounding numbers from the Isle Of Wight festival. By this time they were clearly having more fun with the kind of extended improvisations grandstanded on a 20 minute cut of “Pentangling” from Aberdeen Music Hall. The final “People On The Highway” belies the tensions and apathy that folded the group at the end of 1972 – Jansch and McShee even chuckle to each other in melodic mid-flight. You can hear how, if the spell hadn’t been broken by exhaustion the following year, they might have mutated Britain’s folk tradition into a less earthy direction than Fairport or Steeleye Span.