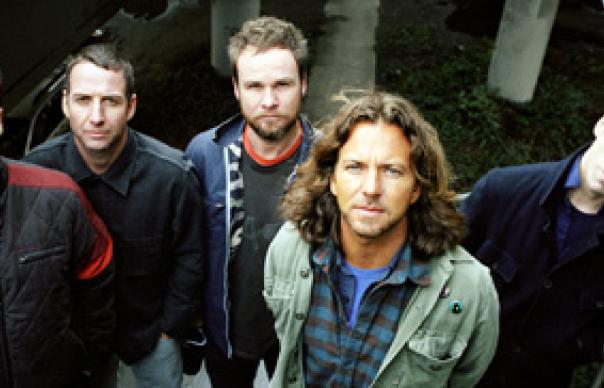 Pearl Jam hove hairily into general view in ’91, accompanied by a chorus of disapproval from the grunge mujahedin that turned into a disconsolate wail a year later, a dismal ululation, loud enough to be heard from Seattle to Stockholm, when sales of their debut LP, Ten, went through what is popularly acknowledged as the roof.

What so exercised these flannel-shirted fundamentalists was a perception of Pearl Jam as slick opportunists, mercenary chancers whose music and the way they played it was a cynical betrayal of what grunge was meant to be, a grubby defilement of something they liked to think was wholly pure, unadulterated by gross commercial imperatives.

The idea of Pearl Jam as greedy interlopers, new and unwelcome on the Seattle scene, was blatantly unfair. While vocalist Eddie Vedder had been recruited from San Diego band Bad Radio, founder members Stone Gossard and Jeff Ament were Seattle thoroughbreds and had played in proto-grunge types Green River with Mark Arm and Steve Turner, who later formed Mudhoney.

Gossard and Ament subsequently joined charismatic vocalist Andrew Wood in Mother Love Bone, who were signed to Mercury in a major label deal that was much frowned upon by fledgling grungenistas, for whom noble penury was presumably preferable to the apparent vulgarity of actually selling records. Not that Stone and Jeff actually saw much reward from Mother Love Bone. Andrew Wood, who had a history of drug abuse, died of a heroin overdose four months before the July 1990 release of their debut album, Apple, thus scuppering things entirely for the band.

Kurt Cobain was also famously quick to denounce Pearl Jam, who he seems to have regarded as something akin to the Great Satan, musical evil incarnate (if only Eddie had been as keen to mention The Vaselines as an influence as he was to talk in interviews about his beloved Who!). For Cobain, Ten, released a month before Nirvana’s Nevermind, was a creaking repository of hoary rock clichés, dated metal riffs and hard rock bluster – all those guitar solos, man – that he continued to rail against long after most sensible people had stopped listening to his sulky bleating.

Not that any of this rank snottiness about Pearl Jam’s grunge pedigree carried much weight with the band’s new fans – 12 million of them, eventually – who bought Ten in sufficient numbers to keep it on the US charts for over two years. They only had ears for the music, which was thrilling, and Eddie’s lyrics, which gave heartfelt voice to their adolescent traumas and teenage anxieties, their disen-franchisement, frustrations and the feeling that the world in its entirety was against them.

Pearl Jam were on their way to becoming arguably the biggest US rock band of the ’90s. When I interviewed them in 1993, just after their second album, Vs, came out, it was clear, however, that the group themselves had longstanding misgivings about the final version of Ten and that the comparative rawness and essentially ‘live’ feel of Vs more happily represented them and the way they would have preferred to sound on their debut. There were hints even then that given the opportunity, they’d remix it, to make it sound more like the record they had originally wanted to make.

That opportunity is now here. As part of an elaborate build-up to the band’s 20th anniversary in 2011, Ten is being reissued in four special editions. The Legacy Edition is a two-disc set featuring the original album, digitally remastered, and a completely new mix by Brendan O’Brien, plus six bonus tracks, including out-takes from the Ten sessions and “Just A Girl”, from 1990, one of the first tracks Vedder recorded with the band, who were then still called Mookie Blaylock.

The Deluxe Edition adds to the aforementioned a DVD of Pearl Jam’s 1992 MTV Unplugged performance, previously unreleased. There’s also a two-album vinyl version, featuring the remastered original album and O’Brien’s remix. Finally, for anyone unaffected by the credit crunch, there’s a Super Deluxe Edition, which means for north of £100, you get the two-disc set, plus the DVD, the vinyl versions, plus a live vinyl double album recorded at a Seattle concert in 1992, plus a replica of the original demo cassette that got Eddie the gig with the band, the so-called “Momma-Son” (also known as “Mamasan”) tape, a three-song “mini-opera”, as Vedder later described it, featuring “Once”, “Alive” and “Footsteps”. All kinds of memorabilia and mementoes will also be part of the package.

There is, then, no shortage of choice for the avid collector. But what, you know, about the music? The original Ten was produced by Rick Parashar at Seattle’s London Bridge Studio and mixed in, of all places, Dorking, by the English engineer Tim Palmer, who’d previously worked with Robert Plant, The Mission and The House Of Love and had recently produced David Bowie’s Tin Machine. Palmer’s principal contribution to Ten seems to have been the drenching of the final mix in reverb, a chasmic echo that made the disc’s already anthemic songs sound even more windily panoramic, to the point where, in the band’s opinion, they were gustily overblown. Brendan O’Brien’s remix dramatically addresses this inclination towards epic bombast, but it’s not to say the original album is now the equivalent of a muddy dog.

It sounds great, actually – from the inflammatory guitar intro to the momentous “Once” to the final handsome drift of “Release”, it’s a resplendent thing.

There is much, meanwhile, to recommend the O’Brien remix, or “deconstruction” as he puts it. What O’Brien has mostly done is strip away the more ornate layers of the Palmer mix and cutting back on the album’s moments of more florid melodrama. His ‘version’ overall is less, I suppose, ornate and billowing, generally tougher, certainly more direct. It’s not as if O’Brien has suddenly re-cast Ten as something as raw and heroically ramshackle as, say Tonight’s The Night, far from it, but the sound is less sculptured, with a hint more urgency, for instance, about the long stretch of mid-tempo tracks on what used to be the record’s second side. Something like “Porch”, for instance, benefits particularly from the producer’s careful work.

Throughout, O’Brien also brings greater clarity to the band’s dense arrangements and the interplay between guitarists Stone Gossard and Mike McCready, whose lead solos seem here positively unleashed, on every front truly explosive, especially on “Alive”, on which he blows the studio doors off their hinges. On a first side full of classic tracks – “Alive”, Even Flow”, “Why Go” and “Jeremy”, that fraught tale of classroom suicide – the best now as it was 18 years ago is the anguished ballad, “Black”, so achingly reminiscent of something great by Mark Eitzel like “Western Skies”, perhaps (Vedder was a big fan of American Music Club), which is also the undisputed highlight of the Unplugged DVD.